In a CNBC interview, AIA President Jeff Burnstein argued against the concept of creating a robot tax, which would see governments taxing companies that use robots. 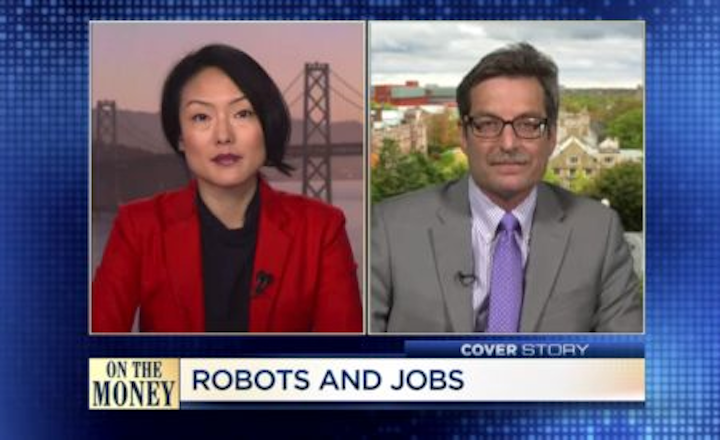 In a CNBC interview, AIA President Jeff Burnstein argued against the concept of creating a robot tax, which would see governments taxing companies that use robots.

In the CNBC "On The Money" interview, San Francisco Board of Supervisors member Jane Kim also described her stance on taxing robots, and why she thinks it is important.

"I think automation is a good thing," San Francisco Board of Supervisors member Jane Kim told CNBC's "On the Money" in an interview, "but there will be a downside to this technological progress and workers will be left behind."

As a result, Kim has created a committee called the "Jobs of the Future Fund," which is looking into continuing the payroll tax and extending it robots that perform jobs humans currently do, she explained. Companies would pay into a fund, the same payroll tax and social security the replaced worked was due, with the goal of helping workers that are displaced by their jobs and re-educated them.

Burnstein countered this idea, explaining that robots are actually helping save and create jobs, not causing unemployment. Data gathered by the AIA shows that, over two years, whenever industrial robots rise, unemployment falls.

"The real problem we have is we have so many unfilled jobs that people don't have the skills for. The real threat to jobs in America is when we can't compete," he said.

Creating additional taxes would harm innovation, Burnstein posited, asking "Why would we want to put disincentives on companies using the best technology available?"

CNBC cites a Pew Research Center poll which says that 72% of Americans say they are worried that machines might do many of the jobs currently done by humans and that 25% of those consider themselves "very worried."

Burnstein, however, countered this sentiment: "All the hysteria about job losses, this is nothing new. We've been hearing these threats forever. But we're really good at creating new jobs. We can't always define them."

He added, "Automation has been changing the nature of jobs forever."

A recent report from the AIA shows that in the first half of 2017, many growth records were set in the areas of robotics, as well as machine vision and motion control technology. In fact, the North American robots market had its best opening half ever to being 2017, setting new records in order units, order revenue, shipment units, and shipment revenue.

In total, 19,331 robots valued at approximately $1.031 billion were sold in North America during this timeframe, which is the highest level ever recorded to begin a year. This represents 33% growth in units and 26% growth in dollars over 2016. Orders in the automotive industry grew substantially in the first half of the year, increasing 39% in units and 37% in dollars, while non-automotive orders also grew 21% in units and 10% in dollars.

"Year over year, our membership has been on a steady growth trajectory, the result of more companies understanding, and embracing, the direct impact automation can have on their bottom line," said Burnstein on the numbers. "We look forward to the continued advancement of our industry and helping companies of all sizes access the connections, information, and training they need to succeed with automation."

View the CNBC video.
View more information on the AIA.