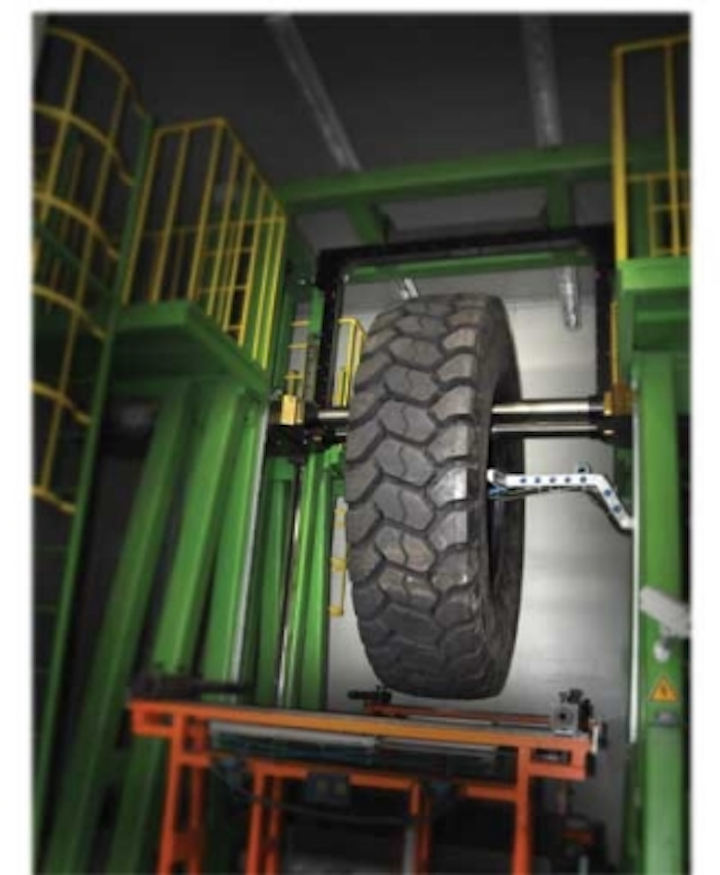 Earth-moving equipment for the mining and construction industry relies on off-road tires to move heavy loads over rough terrain. While this equipment is expensive, so are the very large tires that are deployed on these vehicles. Any defects or faults in the tire construction can result in costly downtime or machinery failure.

To ensure its products are not defective, tire manufacturer Double Coin enlisted Tianjin Saixiang Technology to build a semiautomated machine for tire analysis. Using a combination of off-the-shelf linescan x-ray sources, cameras, and in-house developed software allows the equipment to analyze tires as large as 12.6 ft in diameter every 200 s.

In the development of the x-ray machine, engineers at Tianjin Saixiang Technology used x-ray linescan detectors and software from X-Scan Imaging.

“When radial tires are manufactured,” explains Chinlee Wang, president and CEO of X-Scan Imaging, “different types of rubber material and chemicals are first mixed, processed into slabs, and slit into strips to form sidewalls or tread. One key aspect of the composition of a radial tire is its belts and beads. While steel cords and rubber provide tire strength and dent resistance, bands of high-strength steel wire known as beads provide the mechanical strength to mount the tire on the wheel.”

In the production of these tires, it is imperative for the steel to be encased correctly in the finished tire; if the beads are broken, misaligned, or incorrectly spaced, the tire may wear incorrectly or fail catastrophically.

Because of the finished tires’ shape, it is impossible to inspect the belts and beads by using standard area-array x-ray equipment. To image the belts, engineers at Tianjin Saixiang Technology used a panoramic x-ray source placed inside the tire and detected the x-rays using a XU8800 series U-shaped linescan x-ray detector from X-Scan Imaging.

By rotating the tire and capturing a series of images as the tire is rotated, the system builds a two-dimensional map of the tire tread, beads, and sidewalls. “Because the tires can be as large as 12.6 ft in diameter,” says Wang, “they are first rolled onto a gantry where they are positioned under the U-shaped linescan detector” (see Fig. 1). This gantry then hoists the tire under the U-shaped detector and a 140-kV, 5-mA panoramic x-ray source from RTW is then positioned close to the beads of the tire.

In designing the U-shaped detector, X-Scan Imaging used a number of its own XB8804L CMOS-based x-ray linear detectors that the company also offers to OEMs. To detect x-rays, these linear CMOS imagers are offered with a number of scintillator materials such as gadolinium oxysulfide doped with terbium (Gadox) that allow x-rays to be converted into visible light. “For x-ray energies below 160 kV as is used in the tire inspection system, Gadox offers an optimal balance between light output per x-ray energy and imaging resolution,” says Wang.

Offered in a number of configurations, the XB8804L series used in the linear array camera employs multiple 12.8 mm long, 32 × 1 linear diode arrays (LDAs), each with a pixel pitch of 0.4 mm. The LDAs are integrated with an array of charge integrating amplifiers, correlated-double-sampling (CDS) circuits, and sample-and-hold circuits on CMOS-based chips. In operation, each CMOS detector array chip generates an end-of-scan pulse that can be used to initiate the scanning of the next detector array. Thus, a longer, continuous detector array can be formed from a daisy chain of smaller detector arrays.

Ninety 51.2-mm devices were then used in the final system, with 25 placed in each arm of the scanner, 34 at the top of the scanner, and three in each top corner. “In this way,” says Wang, “the line-scanner can digitize 11,520 individual pixels.”

In the scanner design, Wang and his colleagues clocked the analog output from each device at 94 kHz to one of three inputs on an analog front end (AFE) that incorporates CDS, programmable gain and offset, multiplexing, and analog-to-digital conversion circuitry.

“Because this AFE incorporates correlated double sampling,” says Wang, “it can be used to remove undesired offset values and noise from the captured analog signal.” Outputs from all 32 AFEs used in the line-scanner are then read into a shift register and output at 12 MHz.

Incorporating the Camera Link standard as the interface between the scanner and host computer allows system integrators to choose from a number of different Camera Link frame grabbers (see Fig. 2). This Camera Link interface also provides a serial mechanism that allows different models of the linescan imager to be configured for speed, sensitivity, and resolution depending on the type of detector being used.

In the tire inspection system, engineers at Tianjin Saixiang Technology chose to interface the line-scanner with a PC-based PCI DV C-Link Camera Link frame grabber from Engineering Design Team. To configure the system, X-Scan Imaging supplied Tianjin Saixiang Technology with a software development kit (SDK) replete with an application programming interface (API). Calling routines from the SDK’s API allows the system to be configured and scanned images transferred to the host PC and saved in the host PC’s memory.

“Double Coin required a number of features to be incorporated into the final system,” says Wang. “First, it was required that the system begin x-ray scanning as soon as the x-ray source was powered and stop x-ray scanning as the source was powered off. Second, the company knew that different types of tires would yield images of different brightness levels. Thus, the system was also required to allow the operator to adjust these levels depending on which types of tires were being examined. Finally, it was necessary to evaluate whether the steel bands within each of the tires was evenly spaced.”

“By profiling a one-dimensional cross-section of the display and plotting a brightness level at each point, the system is capable of measuring the spacing between the steel bands of the tires,” says Wang. At present, however, the system remains semiautomated.

“After the system is initialized,” adds Wang, “image data are transferred dynamically to the host PC where they are displayed in real time as they are digitized.” This results in a 2-D scan of the tire being dynamically displayed on the system monitor. Details of each individual tire structure can then be analyzed by the operator.

For each inspection, which lasts approximately 200 s, an operator is required to monitor the display and visually analyze the tire for any defects. If defects do occur, the tire is then flagged for reworking.

In future, Tianjin Saixiang Technology hopes to automate this process using more sophisticated software. According to Wang, many US tire manufacturers are also evaluating the company’s linear x-ray line-scanners for possible deployment.