In this week’s roundup from the Association for Unmanned Vehicle Systems International (AUVSI), which highlights some of the latest news and headlines in unmanned vehicles and robotics, learn about autonomous underwater vehicles (AUV) that were used to find a missing Argentine Navy submarine, the use of unmanned aerial systems (UAS) for monitoring marine species and for commercial operations over people.

In this week’s roundup from the Association for Unmanned Vehicle Systems International(AUVSI), which highlights some of the latest news and headlines in unmanned vehicles and robotics,learn about autonomous underwater vehicles (AUV) that were used to find a missing Argentine Navy submarine, the use of unmanned aerial systems (UAS) for monitoring marine species and for commercial operations over people.

According to Ocean Infinity, the submarine was found in a ravine in 920 meters of water, approximately 600 kilometers east of Comodoro Rivadavia in the Atlantic Ocean.

"Our thoughts are with the many families affected by this terrible tragedy. We sincerely hope that locating the resting place of the ARA San Juan will be of some comfort to them at what must be a profoundly difficult time," Ocean Infinity’s CEO Oliver Plunkett said after the ARA San Juan was found.

"Furthermore, we hope our work will lead to their questions being answered and lessons learned which help to prevent anything similar from happening again."

The search was conducted by a team made up of approximately 60 crew members on board the Seabed Constructor offshore vessel. The search operation was observed by three officers of the Argentine Navy and four family members of the crew of the ARA San Juan.

"We are particularly grateful to the Argentinian Navy whose constant support and encouragement was invaluable," Plunkett added.

Ocean Infinity says that it located the wreckage of the ARA San Juan after two months of seabed search. The company notes that it had committed to conduct the search operation for up to sixty days, while taking on the economic risk of the search, as it was only going to receive payment if the submarine was found.

Ocean Infinity’s AUVs are built for these types of complex operations, as they can operate in water depths from five meters to 6,000 meters, covering wide areas of the seabed at "unparalleled" speed, the company says. Since they are not tethered to their host vessel during operations, the AUVs can go deeper and collect higher quality data for the search.

The AUVs can conduct successful operations thanks to being equipped with a variety of tools, including side scan sonar, a multi-beam echo-sounder HD camera, and synthetic aperture sonar.

Ocean Infinity adds that from the host vessel, it can deploy two work class ROVs and heavy lifting equipment capable of retrieving objects weighing up to 45 tons from 6000 meters.

Consumer-grade UAS can be beneficial when monitoring marine species across multiple sites in the wild, according to new research from North Carolina State University.

The work shows that scientists and conservationists interested in studying populations of sharks, rays, sea turtles and other marine megafauna can benefit from using this technology for their efforts.

"We found that drones can be used to count and make species-level identifications of marine species, particularly in shallow marine environments," says Enie Hensel, a Ph.D. candidate at NC State and first author of a paper on the work.

"Demonstrating the viability of drones for this work matters, because these are inexpensive tools for collecting accurate abundance estimates. And those estimates are important for both informing the development of conservation efforts and for assessing the effectiveness of those efforts."

While previous studies on the use of UAS to monitor marine species have focused on single sites, NC State’s work evaluated multiple sites and demonstrated that UAS can be used to assess environmental variables that may be responsible for population differences between locations. An example of this is using UAS to help target conservation efforts on sites that have the most value in terms of supporting specific species.

Researchers also demonstrated that UAS are useful at sites with varying degrees of water clarity.

To evaluate the effectiveness of this technology, researchers placed fake sharks underwater at two sites with different water clarity. Thanks to the footage from the UAS, researchers were able to identify all of the decoys at both sites.

"We chose grey shark decoys because they would be the most difficult to spot in these environments, but we were able to spot them all," Hensel says.

During field tests, researchers were also able to make species-level identifications of a variety of sharks, as well as southern stingrays and spotted eagle rays. Researchers also used UAS footage to identify sea turtles, but they had a hard time differentiating between hawksbill and green sea turtles.

The paper on this work, entitled "Using a small, consumer-grade drone to identify and count marine megafauna in shallow habitats," has been published in the Latin American Journal of Aquatic Research. 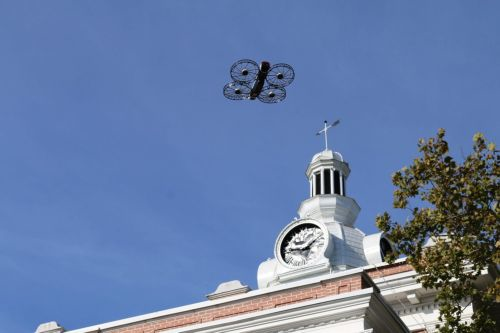 Rutherford County, Tennessee has received an FAA waiver to conduct commercial UAS operations over people, becoming the first and only county government in the U.S. with this capability.

The county will utilize Vantage Robotics’ Snap UAS for these operations in both emergency and non-emergency situations.

"We’re excited at Vantage, both to be continuing to pave new ground for safe and legal UAV use near people as well to see Snap contributing to public safety," Vantage says.

This landmark FAA waiver comes a little over a year after the FAA granted CNN a "first-of-its-kind Part 107 waiver" that allows the media organization to fly a small UAS over people. Like Rutherford County, CNN also utilized the Snap UAS.

"Additionally, we’re pleased to see that the FAA has demonstrated a repeatable waiver process for Vantage to expand our support of additional customers for commercial operations over people," Vantage adds.

As part of the waiver application for Rutherford County, Vantage demonstrated the minimal risk involved with flying the Snap UAS over people. Snap is a low-risk option for these types of operations thanks to a combination of the drone’s shrouded rotors, lightweight design, and ability to absorb significant energy on impact thanks to its frangible design.

Rutherford County was interested in improving the effectiveness of its UAS program, which is what ultimately led it to Vantage.

"Demands of today’s local governments mean we must function in as many scenarios as possible. The ability to safely and appropriately maneuver our aerial assets over and near event personnel or participants gives our program several new possibilities," explains Brian Robertson, chief information officer for Rutherford.

"Whether for routine coverage of numerous events such as Main Street’s Jazz Fest in May, Uncle Dave Macon Days in July, or during incidents such as the November 6 tornado, the ability to capture the gravity or details of these events from the unique perspective is a major addition to this public service."

In this week’s/today's roundup from the Association for Unmanned Vehicle Systems International (AUVSI) which highlights some of the latest news and headlines in unmanned vehicles and robotics, the Wildflower International technology firm pairs with Silent Falcon UAS in Wildflower's bid to build a new data service, PAE ISR upgrades the Resolute Eagle UAS with new communication capability, and Ford Motor Company and Michigan State University continue their collaboration on autonomous technology and
Jan 8th, 2019

The OS02F10 and OS04B10 2-micron image sensors from OmniVision Technologies are built with the company's OmniBSI pixel technology and each have a chief ray angle of 9°, which allows for thinner modules and wide-aperture lenses. The sensors are designed for use in security and surveillance cameras.
Dec 20th, 2018

In this week’s/today's roundup from the Association for Unmanned Vehicle Systems International (AUVSI), which highlights some of the latest news and headlines in unmanned vehicles and robotics, the New York City Police Department fields a fleet of UAS, Walmart plans to expand its current fleet of service robots thanks to Brain Corp., and use of UAS for search and rescue operations continues to expand.
Dec 12th, 2018

Watching a bullet slice through an object as thin as a playing card is an impressive sight. It is also an image you cannot capture without the right high-speed imaging system.
Dennis Scimeca
Dec 7th, 2018

In this week’s roundup from the Association for Unmanned Vehicle Systems International (AUVSI), which highlights some of the latest news and headlines in unmanned vehicles and robotics, learn about a new self-driving car service in Texas, autonomous mobile robots from Fetch Robotics being deployed at Honeywell distribution centers, and a new contract from the U.S. Navy for the development of unmanned underwater vehicles.
Oct 25th, 2018

In this week’s roundup from the Association for Unmanned Vehicle Systems International (AUVSI), which highlights some of the latest news and headlines in unmanned vehicles and robotics, learn about Project Hero—a custom Land Rover Discovery car with a deployed unmanned aerial system (UAS) in tow that will be deployed for search-and-rescue operations for the Red Cross in Austria.
Oct 3rd, 2018

In this week’s roundup from the Association for Unmanned Vehicle Systems International (AUVSI), which highlights some of the latest news and headlines in unmanned vehicles and robotics, learn about how State Farm was granted a waiver for UAS operations for damage assessment in communities impacted by Hurricane Florence. Additionally, learn about a collaboration aimed at UAS traffic management and an underwater tracking technology being used by the US Naval Surface Warfare Center.
James Carroll
Sep 27th, 2018

In this week’s roundup from the Association for Unmanned Vehicle Systems International (AUVSI), which highlights some of the latest news and headlines in unmanned vehicles and robotics, learn about an extended range unmanned aerial system, the first flights under the UAS Integration Pilot Program, and a maritime demonstration showcasing autonomous systems for military operations.
Sep 19th, 2018

In this week’s roundup from the Association for Unmanned Vehicle Systems International (AUVSI), which highlights some of the latest news and headlines in unmanned vehicles and robotics, learn about a demonstration involving unmanned underwater vehicles (UUV), a roadmap for the safe integration of autonomous aircraft, and a new US-based joint venture to bring new UAS products to market.
Sep 12th, 2018

Police from Wiltshire, UK used a drone equipped with an infrared camera to find an 83-year-old woman suffering from dementia who was missing for more than five hours in Corsham.
James Carroll
Sep 11th, 2018

In this week’s roundup from the Association for Unmanned Vehicle Systems International (AUVSI), which highlights some of the latest news and headlines in unmanned vehicles and robotics, learn about Hyundai Motor’s autonomously navigated semi-trailer truck journey, medical drone delivery trials in North Carolina, and an autonomous robotic fish.
Sep 4th, 2018