Solid-state lidar is solving challenges around durability and cost in bringing autonomous vehicles to market. Learn how virtual prototypes are being used to predict the as-built behavior and balance performance with cost. 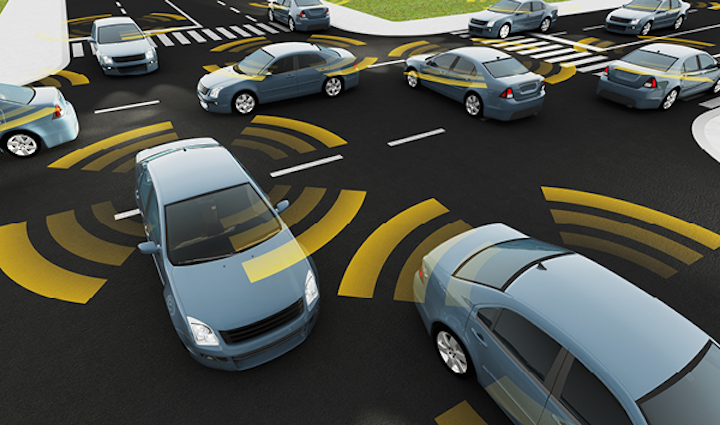 Nearly every major player in the autonomous vehicles market is incorporating lidar into its vehicles. Many believe lidar is the most important optical technology in the race toward mainstream self-driving cars.

Most of the innovation of lidar systems in the automotive industry is focused on creating solid-state systems and reducing the movement of the mechanism that scans the laser beam across the field of view. Because they don’t have mechanical mirrors with 360-degree movement, this typically results in a more limited field of view. But the new solid-state lidar systems meet the technical requirements for long-distance scanning—and because there are no moving parts, they’re also more durable and less expensive than the previously used mechanical scanning systems that were sensitive to vibration.

In addition to increasing the field of view, optical designers are working to maximize the range of automotive lidar systems. The maximum range of the lidar system depends on the laser power, the reflectivity of the target object, and the detector sensitivity.

Lidar systems must also take eye safety into account. Most carmakers strive to use Class 1 lasers, which “cannot emit laser radiation at known hazard levels,” according to the Occupational Safety and Health Administration (OSHA). Therefore, the detector must be sensitive enough to work with both eye-safe laser emissions as well as low-reflectivity targets.

The detectors must also function in bright daylight and handle ambient light levels as high as 98,000 lux (lumens per square meter). To help meet this requirement, lidar designs utilize narrow bandpass filters that only accept wavelengths close to laser light, or they restrict the angle of view. 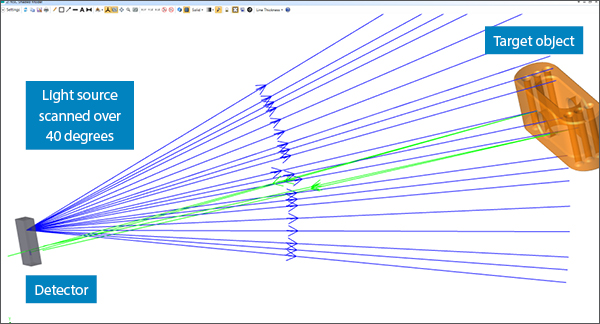 An OpticStudio model showing a light source scanned over 40 degrees toward target object. A small fraction of the source rays are reflected off the target object and collected by the detector.

While designing the intended behavior of optical systems can be straightforward, predicting the as-built behavior and balancing performance with cost requires a comprehensive virtual prototype. All the possible sources of stray light around the lidar systems in autonomous vehicles should be considered. For example, stray sunlight in a lidar system can be treated as a false signal. Or, the signal in a neighboring lidar system may be another source of stray light.

Zemax Virtual Prototyping is the only solution to create a working virtual prototype of the entire lidar system, not just the optical or mechanical components alone. Engineering teams can simulate optical performance on the entire optomechanical product before creating a physical prototype. With Zemax Virtual Prototyping, you can include the effect of traffic signals turning on and off, bicycle lights, and other stray sources. 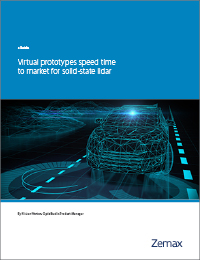 Lidar is one of the most important optical technologies in the race toward mainstream self-driving cars. Most of the innovation of lidar systems in the automotive industry is focused on creating solid-state systems and reducing the movement of the mechanism that scans the laser beam across the field of view. Download a free eGuide learn about:

• The latest designs for solid-state lidar, including a phased array
• The intricacies of designing solid-state lidar systems, including field of view, range, and eye safety
• Using virtual prototypes to predict the as-built behavior and balance performance with cost

Top considerations when designing an optical product for manufacturability

Buying optical design and analysis software: what you need to know

Software that speaks the same language and offers data visualization can help engineers overcome miscommunication and other factors that can thwart the product development process.
Jul 1st, 2018

Shorten time to market, even when engineers are in short supply

There has been a recent uptick in job listings for optical engineers, yet there is only one qualified individual per 1.9 STEM job listings. Virtual prototyping can help you overcome the shortage of optical product design engineering talent.
Jul 1st, 2018

Six times you must get the optical product development process right

Technology that enables robust product simulations is critical to a smooth product development process—especially during six common situations when you can’t afford to get it wrong. Learn how the best teams find errors before they’re failures.
Jun 1st, 2018

Virtual prototyping goes beyond the lens: It’s the mechanical components too

Companies developing optical products can gain a competitive advantage by following six best practices in product development that help overcome the struggle to bring projects to the finish line—on time and on budget.
Jun 1st, 2018