Unmanned systems: Robots help repair a US Air Force base, drone swarms take to the air, and UAS assist with airport traffic management

In this week’s roundup from the Association for Unmanned Vehicle Systems International, which highlights some of the latest news and headlines in unmanned vehicles and robotics, telehandlers clear airfield and test range debris after they sustain hurricane damage, Oklahoma State University gains permission to fly fixed-wing drone swarms, and Rome, NY hosts an integration of UAS into traffic control systems. 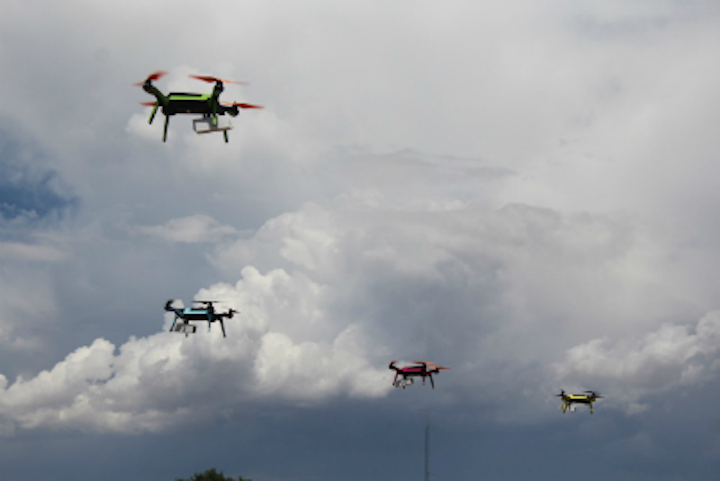 In this week’s roundup from the Association for Unmanned Vehicle Systems International, which highlights some of the latest news and headlines in unmanned vehicles and robotics, telehandlers clear airfield and test range debris after they sustain hurricane damage, Oklahoma State University gains permission to fly fixed-wing drone swarms, and Rome, NY hosts an integration of UAS into traffic control systems.

Located at Tyndall Air Force Base, AFCEC was badly damaged during Hurricane Michael in October 2018.

“When we were asked to use the Air Force-funded RADR robotic retrofit kit technology to assist with the clean-up efforts, we deployed our team without hesitation.”

RE2 also helped clean a test range, during which it helped remove different types of debris including culverts, metal structures, sheet metal and a large, tubular structure.

It only took RE2 minutes to train AFCEC and AFCEC contractors how to teleoperate the vehicle and perform debris removal. Teleoperation with the RE2 Operator Control Unit (OCU) is very similar to actual vehicle operation, so training time was minimal, RE2 notes.

“Consistent with our company’s mission, the teleoperated RADR technology was able to keep AFCEC telehandler operators at a safe distance while performing this dangerous clean-up mission,” Pedersen says. 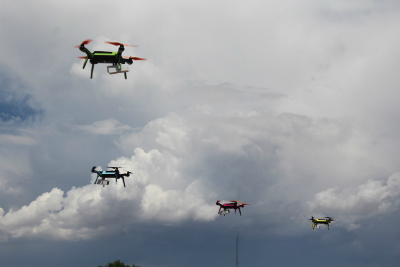 Oklahoma State University (OSU) has announced that its Unmanned Systems Research Institute (USRI) has received the first FAA authorization to fly fixed wing UAS in swarms within the national airspace.

With this flight authorization, a single pilot, along with visual observers for safety considerations, will be allowed to operate a swarm of up to 20 fixed wing aircraft.

According to OSU, the configuration that its researchers have developed creates a “swarm of swarms” where groups of UAS fly within smaller flocks as part of a larger swarm, communicating with a local group leader which then coordinates flights with the overall swarm formation.

“Swarms are the future of autonomous flight,” says Jamey Jacob, professor of mechanical and aerospace engineering and director of the Unmanned Systems Research Institute at OSU.

“This unique first of its kind approval just takes us one step closer to demonstrating for the first time the safe and efficient autonomous flight that will be common place in years to come.”

OSU notes that its research into swarming UAS will advance UAS capabilities into safe operation of autonomous vehicles within the national airspace. The research will also have a direct application into ongoing OSU research in weather, environmental and infrastructure motoring, agriculture, security, and airspace operations.

“It is incredible to be a part of such groundbreaking research as OSU paves the way ahead for expanded autonomous operations,” says Gary Ambrose, research development manager and adjunct professor of mechanical and aerospace engineering at OSU.

“This step opens the door for many of our research partners and sponsors; as we expand their UAS operability and capability.”

With this implementation, the test site’s capabilities have been advanced thanks to the enhancement of multiple, simultaneous beyond visual line of sight (BVLOS) operations that involve both manned and unmanned vehicles sharing the same airspace.

Additionally, ANRA Technologies not only enhances tracking, but it also supports network based Remote ID and detect-and-avoid capabilities.

Designed to integrate both participating and non-participating UAS into a single operational UTM system, the ANRA UTM platform is equipped with a variety of features, including the ability to track UAS, command and control, and flight planning and monitoring.

NUAIR notes that it hosted a two-day conference in January that included more than 40 UAS industry experts from 20 global companies. During the conference, specific “real-world” scenarios were outlined, including testing participating and non-participating UAS in the same airspace.

According to NUAIR, this scenario demonstrates commercial viabilities of UAS, while taking a look at the technical challenges of operating multiple UAS in shared airspace. This testing capability is now possible at the New York State UAS test site thanks to the implementation of the ANRA UTM platform.

“We are excited to work with NUAIR and the NYS UAS Test Site on evolving UTM capabilities and performance standards that will hopefully help define the requirements for an Air Navigation Service Provider (ANSP) “Approvable” service,” says Amit Ganjoo, CEO of ANRA Technologies.

“Without initiatives like this in place, it will be extremely challenging to justify implementation of a commercially viable UTM to support safe BVLOS operations.”