This week’s article from the Association for Unmanned Vehicle Systems International (AUVSI), which highlights some of the latest news and headlines in unmanned vehicles and robotics, covers an unmanned aerial system (UAS) that was used to provide cell phone connectivity for first responders, a company commissioned by the US Air Force to convert manned aircraft to robotically piloted, autonomous aircraft, and a team of researchers flying UAS at night.

This week’s article from the Association for Unmanned Vehicle Systems International (AUVSI), which highlights some of the latest news and headlines in unmanned vehicles and robotics, covers an unmanned aerial system (UAS) that was used to provide cell phone connectivity for first responders, a company commissioned by the US Air Force to convert manned aircraft to robotically piloted, autonomous aircraft, and a team of researchers flying UAS at night. 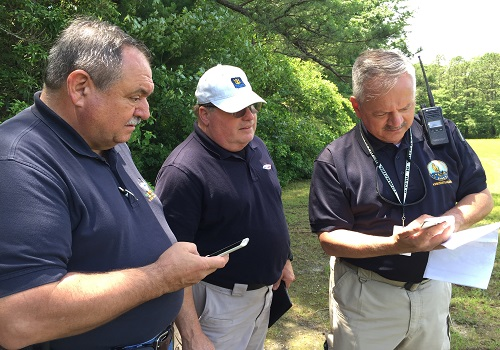 First responders from New Jersey took part in a simulated post-disaster scenario where an unmanned aircraft provided cell phone connectivity, something often lacking in the wake of natural disasters.

The exercise was a joint venture of Verizon, drone services provider American Aerospace Technologies and the Cape May Office of Emergency Management.

"Every time there’s a major incident, the biggest drawback is communications," said Marty Pagluighi, director of the Cape May County Office of Emergency Management. "So any kind of communication enhancements we’re willing to look at. And if we can help them advance this technology, it gives us another tool as emergency managers."

A fixed-wing RS 20 UAS provided by American Aerospace Technologies took off from Woodbine Municipal Airport in Cape May County (accompanied by a chase plane) and then flew over the area. First responders from state police, the U.S. Coast Guard Sector Delaware Bay and Cape May County Office of Emergency Management watched the takeoff and then moved to the nearby Belleplain State Forest, where Verizon simulated a cell phone outage.

Verizon provided the first responders with Samsung S6 cell phones that were attuned to the cell phone system broadcaster located on the aircraft. When they first arrived at a recreational field in the forest, the phones had no service. Once the drone was overhead, they were able to make calls, send texts and make social media posts and even stream video.

"I encourage you to Snapchat to your heart’s content," said Christopher Desmond, principal engineer for Verizon Network Operations.

David Yoel, founder and CEO of American Aerospace, said the payload on the vehicle — Verizon’s Airborne LTE, dubbed a "flying cell site," engineering to provide cell service to the ground from an aircraft — would support up to 68 users at once. During the exercise, 39 people logged on, including some people in the park who weren’t part of the operation but just happened to stumble onto the signal.

During the exercise, Verizon also simulated a lost connection, briefly stopping the transmission and then picking it back up again. The first responders wandered around to various areas of the park to test the bounds of the network as the RS 20 and its chase plane flew circles overhead.

Frank Donato, an emergency system manager from Ocean City, said a few years back the South Jersey area was hit both by Hurricane Irene and the aftershocks from an earthquake centered in northern Virginia.

"Everybody was trying to figure out what happened," and bogged down the cell phone system, Donato said. "That impacts us as first responders, emergency managers. So this is a great exercise and opportunity to see how drone technology can restore those vital lines of communication and free up the space on the network to be able to make those calls and have them go through."

After the main exercise, American Aerospace demonstrated another capability, that of sending video from a quadcopter to the orbiting fixed-wing drone and then sending it back to the command center at the emergency management office. The vehicle was also able to track the flight of the RS 20 overhead and send that data back.

That could come in handy in various scenarios, such as if an emergency responder was cut off on a barrier island but needed to send video to other first responders, American Aerospace’s Yoel said.

RE2 Robotics chosen to develop technology that will convert manned aircraft to robotically piloted, autonomous aircraft

The United States Air Force has selected Pittsburg-based RE2 Robotics to develop the Common Aircraft Retrofit for Novel Autonomous Control (CARNAC) robotic system, which will serve as "a drop-in robotic system to rapidly convert a variety of traditionally manned aircraft to robotically piloted, autonomous aircraft under the Small Business Innovation Research (SBIR) program."

The CARNAC robotic system, which will utilize existing aviation assets and advances in vehicle automation technologies during its development, will be used to operate the aircraft in a similar fashion to how a human pilot does, and there will not be any modifications required to the aircraft.

"By creating a drop-in robotic pilot, we have the ability to insert autonomy into and expand the capabilities of not only traditionally manned air vehicles, but ground and underwater vehicles as well," says Jorgen Pedersen, president and CEO of RE2 Robotics.

"This application will open up a whole new market for our mobile robotic manipulator systems."

RE2 Robotics will demonstrate several different functionalities of the system during the program, including humanoid-like robotic manipulation capabilities, vision-based flight-status recognition and system architecture feasibility.

According to RE2 Robotics, the Department of Defense could benefit significantly from automation and autonomy, as they could "enhance system performance of existing platforms, reduce costs, and enable new missions and capabilities, especially with reduced human exposure to dangerous or life-threatening situations." 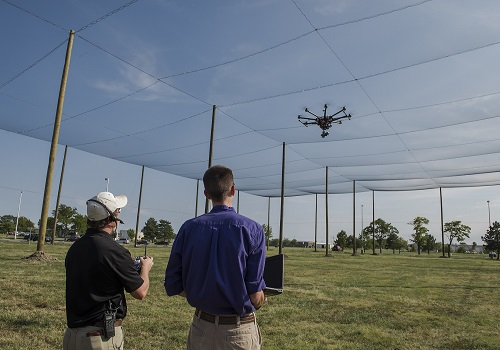 The campus's research sector will benefit from this waiver, and the waiver will also be used in commercial flight training courses, as well as in upcoming curriculum in the UAS degree option.

According to Kurt Carraway, UAS executive director of the Applied Aviation Research Center, the waiver request was initially motivated by an ongoing research project with an electric services company called Westar Energy, but Carraway believes that the waiver will open up a plethora of opportunities in other areas, saying the waiver’s "benefits will have an impact on a multitude of contributions this campus makes to the unmanned industry."

After classroom instruction is completed, students receive one hour of hands-on night flight training in the field using a S-1000 multirotor aircraft.

For, David Burchfield, UAS teaching assistant professor and degree option coordinator at Kansas State Polytechnic, giving students the ability to learn about UAS operations at night is another way to give them a leg up once they enter the UAS industry.

"There are an increasing number of night applications for UAS, such as search and rescue, aerial photography and ag mapping, and as time goes on, students are more likely to be working in those conditions," Burchfield says.

"It is just another tool in their tool box to take with them to industry."