While much of the recent coverage of autonomous vehicles tends to focus on the enabling technology, safety, investments, and product developments; one of the aspects of a real driverless car society that is not discussed is what people may be able to do with their time without having to drive. 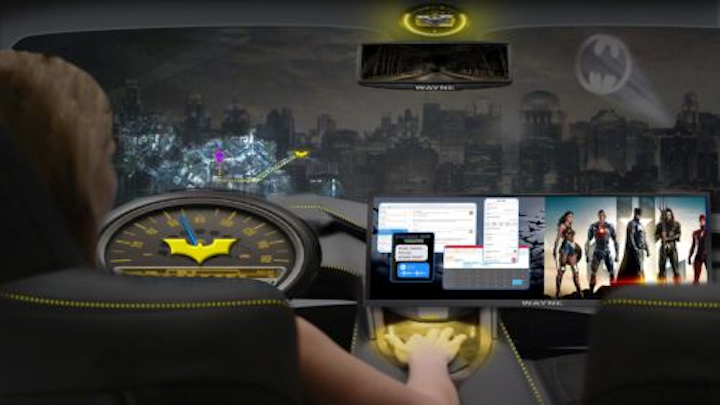 While much of the recent coverage of autonomous vehicles tends to focus on the enabling technology, safety, investments, and product developments; one of the aspects of a real driverless car society that is not discussed is what people may be able to do with their time without having to drive.

Intel—a company with a massive, ambitious vision for autonomous vehicles (AV)—has announced a partnership with Warner Bros. to develop in-cabin, immersive experiences in AV settings. This partnership was announced on November 29 during Automobility LA in Las Angeles, where Intel CEO Brian Krzanich shed further light on the project.

"Called the AV Entertainment Experience, we are creating a first-of-its-kind proof-of-concept car to demonstrate what entertainment in the vehicle could look like in the future," he wrote. "As a member of the Intel 100-car test fleet, the vehicle will showcase the potential for entertainment in an autonomous driving world."

He added, "The rise of the AV industry will create one of the greatest expansions of consumer time available for entertainment we’ve seen in a long time. As passengers shift from being drivers to riders, their connected-device time, including video-viewing time, will increase. In fact, recent transportation surveys indicate the average American spends more than 300 hours per year behind the wheel."

With all of this time available, Intel and Warner Bros. imagine "significant possibilities inside the AV space," including content such as movies and television programming, but also new, immersive experiences courtesy of in-cabin virtual reality (VR) and augmented reality (AR) innovations.

"For example, a fan of the superhero Batman could enjoy riding in the Batmobile through the streets of Gotham City, while AR capabilities render the car a literal lens to the outside world, enabling passengers to view advertising and other discovery experiences," explained Krzanich.

These possibilities, he explained, are fun to imagine, but the ultimate test for the future of autonomous cars is going to be winning over passengers. The technology will ultimately not matter if there are no riders who trust and feel comfortable using it. Intel is ultimately working toward this, as its Mobileye ADAS (advanced driver assistance system) technology on the road has proven to reduce accidents by 30%, save 1,400 lives, prevent 450,000 crashes, and save $10 billion in economic losses, according to the company.

The long-term goal of course, has to be zero driving-related fatalities, wrote Krzanich, who said that, "to reach this goal, we need standardsand solutions that will enable mass production and adoption of autonomous vehicles. For the long period when autonomous vehicles share the road with human drivers, the industry will need standards that definitively assign fault when collisions occur."

To this end, Intel is collaborating with the industry and policymakers on how safety performance is measured and interpreted for autonomous cars. Already, Intel and Mobileye have proposed a formal mathematical model called Responsibility-Sensitive Safety (RSS) to ensure, from a planning and decision-making perspective, the autonomous vehicle system will not issue a command leading to an accident.

"From entertainment to safety systems, we view the autonomous vehicle as one the most exciting platforms today and just the beginning of a renaissance for the automotive industry," said Krzanich.