In this week’s roundup from the Association for Unmanned Vehicle Systems International (AUVSI), which highlights some of the latest news and headlines in unmanned vehicles and robotics, learn about some of the main takeaways from the third annual FAA UAS Symposium, including the FAA’s willingness to work with companies to achieve their goals and how Amazon and Google plans for drone-based delivery. Additionally, learn about the development of a new autonomous passenger-drone system in New Zealand.

In this week’s roundup from the Association for Unmanned Vehicle Systems International(AUVSI), which highlights some of the latest news and headlines in unmanned vehicles and robotics,learn about some of the main takeaways from the third annual FAA UAS Symposium, including the FAA’s willingness to work with companies to achieve their goals and how Amazon and Google plans for drone-based delivery. Additionally, learn about the development of a new autonomous passenger-drone system in New Zealand. 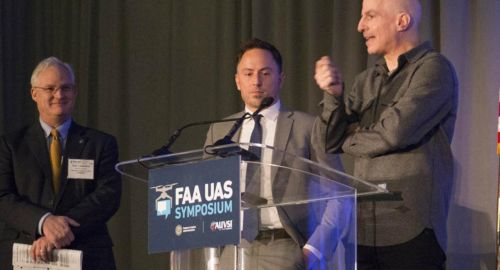 “The message of this whole conference is, the FAA is open for business,” said Derek Kan, undersecretary for policy at the U.S. Department of Transportation, summing up the Federal Aviation Administration’s stance at the third annual FAA UAS Symposium, cosponsored by AUVSI.

FAA officials said repeatedly that they want to talk to industry about ways to help companies achieve their goals, including for beyond-line-of-sight flights and package delivery.

One key element to achieve such things is an unmanned traffic management system, which NASA is working on, along with numerous industry and government partners.

“Our research will be completed by 2019,” said Parimal Kopardekar, who is leading the UTM effort for NASA.

NASA’s work is divided into modular sections, so some functions can be rolled out before the whole effort is finished and turned over to industry to implement.

“Our hope is not to wait for all of it to be finished before implementing things,” Kopardekar said.

Jay Merkel, a deputy vice president at the FAA’s Air Traffic Organization, urged attendees, “don’t wait for UTM. We are all here ready to start moving you toward whatever you need under this paradigm. You just need to help us understand what you need and where you need it and we will help you get there.”

Two online giants, Amazon and Google, have outlined how they believe their planned package delivery systems will work.

Gur Kimchi, vice president of Amazon Prime Air, says UAS communications will be a series of “federated” systems, much like cell phone networks, not one overarching system.

“There is no center, there is no one place that everybody talks to to get authorization,” he said.

Future UAS networks will need to match the safety of the existing manned aviation system, he said, which can be done by authenticating who is operating a given drone and allowing vehicle-to-vehicle communications and automated controllers.

When a drone is to cross a boundary with another aircraft, it would have to notify that aircraft, and would also talk to its automated controller, which would automatically deconflict the two.

To make this work, Kimchi said the industry needs protocols for controller-to-controller communication, which are being developed right now; protocols for vehicle-to-vehicle communications, which could be a safety fallback if the internet is blocked or slow; and performance-based rules and regulations for automated aircraft sense and avoid.

James Burgess of Project Wing, the delivery program for X, formerly Google X, said his effort is taking a risk-based approach to test its hardware and software.

He agreed with Kimchi that “automation is very necessary for these systems,” and their testing has shown that more automation makes the system safer. He also agreed in the concept of federated control systems, “so multiple providers can offer this service in a way that’s safe and scalable.”

Project Wing has racked up more than 850 delivery test flights, which included learning about the fears of residents who were local to where the tests took place. For instance, in a rural area, they had to demonstrate that drone flights wouldn’t scare horses.

Risk-based flight approvals are “a trend we’ve already seen, and we’re really excited by,” he said.

For instance, Project Wing drones fly with an LTE link. If that is lost, the traditional thinking is that the drone should land. That might not actually be the best idea, he said. If the route has no conflicts with other aircraft, “maybe it’s safer to keep flying and finish the mission.”

Earl Lawrence, executive director of the FAA UAS Integration Office, said the FAA agrees with the general approach from Amazon and Google.

“I’m sitting there thinking we’re all starting to speak the same language,” he said. “We are innovating together.”

Kitty Hawk has announced that it will begin the regulatory approval process required for launching its "autonomous passenger-drone system," Cora, in New Zealand.

Eight years in the making, Cora is a 12-rotor "plane-drone hybrid" that can take off vertically like a UAS, but then uses a propeller at the back to "fly at up to 110 miles an hour for around 62 miles at a time."

With a wingspan of 11 meters, the all-electric, two-person craft, can fly autonomously up to 3,000 feet above ground.

“Designing an air taxi for everyday life means bringing the airport to you. That’s why Cora can take off and land like a helicopter, eliminating the need for runways,” says Kitty Hawk, via the Guardian. “Cora has the potential to transform spaces like rooftops and parking lots into places to take off right from your neighborhood.”

Cora has undergone secret testing under the cover of another company called Zephyr Airworks.

Within three years, Kitty Hawk hopes to have official certification and to have launched a commercial service.

The company is personally financed by Google co-founder Larry Page, and is being run by former Google autonomous car director Sebastian Thrun.