In this week’s roundup from the Association for Unmanned Vehicle Systems International (AUVSI), which highlights some of the latest news and headlines in unmanned vehicles and robotics, learn about Canada’s largest beyond visual line of sight operations, a new unmanned aerial system (UAS) for the U.S. Navy, and the expansion of the Miami-based Airborne Response, which describes itself as "the nation's premier provider of high resolution aerial imagery for emergency management and disaster response operations."

In this week’s roundup from the Association for Unmanned Vehicle Systems International(AUVSI), which highlights some of the latest news and headlines in unmanned vehicles and robotics,learn about Canada’s largest beyond visual line of sight operations, a new unmanned aerial system (UAS) for the U.S. Navy, and the expansion of the Miami-based Airborne Response, which describes itself as "the nation's premier provider of high resolution aerial imagery for emergency management and disaster response operations."

In-Flight Data has announced that starting this week, it is embarking on Canada's largest BVLOS UAS Operations trial to date.

With support from senseFly, this project will seek to "demonstrate that BVLOS UAS flights can be conducted safely and efficiently, to the benefit of all Canadians, while providing cost reductions and/or operational efficiencies for the different use-cases involved."

"We are truly excited to get the go ahead for this ambitious project," says Chris Healy, the owner of In-Flight Data.

"Working closely with senseFly and our 20 partner organizations, we’ll be collecting a huge amount of geo-accurate data—across many types of long-range drone applications—which we are confident will help contribute to the creation of pragmatic future BVLOS legislation."

During the trial, which is expected to run until early November, In-Flight Data will look to complete one BVLOS mission per week. The missions, which are defined by the trial’s 20 partner organizations, will cover a wide variety of operations, including pipeline surveys, graveyard inventory assessments, and search and rescue applications.

"The reasons we made this trial so large are two-fold," Healy explains. "The more data, the better the risk models Transport Canada can create, which will help them to create safety-focused BVLOS regulations that benefit everyone. And secondly, there are just so many potential BVLOS applications out there, we really wanted to explore a good number of these."

The flight safety data collected during the trial will be provided to Unmanned Systems Canada and Transport Canada (TC) to "help define BVLOS risk models for different categories of unmanned aircraft," which will ultimately contribute to the growth of Canada’s commercial UAS industry, according to senseFly’s Regulatory Project Manager, Samuel Dépraz.

"The vast amount of flight safety data and learnings that Chris' team will collect and share will be extremely beneficial to the future growth of Canada’s commercial drone industry, and I’m sure other regulators around the world will be following this project with interest," Dépraz says.

"With In-Flight Data's extensive operational experience, the project’s diverse, committed partners, and its ‘Compliant’ senseFly drones, I’ve no doubt this trial will be a success."

Some of the key trial statistics for this project include 14 different test sites, flights up to 10 kilometers in length, and more than 1,500 kilometers total linear flight distance. 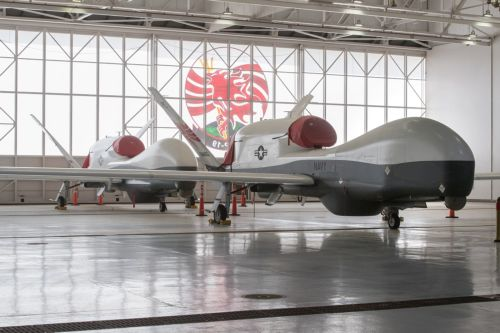 On May 31, Northrop Grumman and the U.S. Navy officially welcomed the MQ-4C Triton UAS to the fleet during a ceremony to celebrate the commencement of flight operations at Naval Base Ventura County, Point Mugu.

Naval Base Ventura County (NBVC) Point Mugu in California is home to the maintenance detachment of Unmanned Patrol Squadron (VUP)-19 DET Point Mugu, which is the Navy’s first unmanned patrol squadron. Maintainers are currently conducting training and tests on the Triton UAS before it deploys to Guam later in 2018.

Point Mugu has also completely refurbished an existing hangar that will house up to four Triton UAS. The first two Triton UAS are located at Point Mugu.

"With each new part of the Triton infrastructure that the Navy stands up, we move closer to making Triton operational and showing the fleet what this remarkable aircraft system can do," said Doug Shaffer, vice president, Triton programs, Northrop Grumman.

"I look forward to the day when this hangar is full of activity leading up to the Guam employment."

An "unmanned intelligence, surveillance and reconnaissance aircraft system," the MQ-4C Triton UAS has an autonomous capability that is piloted from a ground station. The UAS is capable of flying up to 24 hours, and can reach altitudes of up to 55,000 feet.

Triton provides a "critical common operating picture" while flying high above the battle space, distributing images and near-real time video to commanders across the globe. 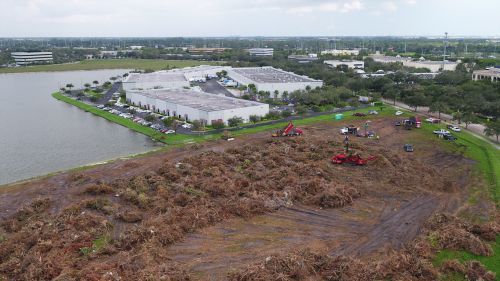 Miami-based Airborne Response, which describes itself as "the nation's premier provider of high resolution aerial imagery for emergency management and disaster response operations," is expanding its force of FAA-certified remote pilots for commercial and emergency UAS operations across the U.S.

The company is doing this as the 2018 summer storm season started a few days earlier than expected with the formation of Subtropical Storm Alberto, which made U.S. landfall on May 28.

"The arrival of Alberto, combined with several new aerial imagery and data contracts, is prompting us to build additional capacity for ‘gray sky’ operations just a bit more rapidly than we had originally anticipated."

According to Todd, Airborne Response has a diverse body of clients, including Fortune 500 companies in the energy, insurance, telecommunications, and A/E sectors, as well as both state and municipal public safety and emergency management agencies.

After an active 2017 hurricane season, Airborne Response has experienced a surge in interest surrounding its UAS services.

"Last year established a baseline for demonstrating the practical use of unmanned aircraft systems for disaster response and recovery operations," Todd explains. "Major hurricanes Harvey, Irma, and Maria were each a unique storm that allowed UAS operators to showcase various capabilities across a diverse array of mission sets."

This year’s hurricane and wildfire seasons are projected to be very busy, so Airborne Response is currently looking for independent contractor remote pilots with "specialized skill sets" for emergency management and disaster response deployments. Remote pilots can obtain more information about open positions at jobs.airborneresponse.com.