In this week’s roundup from the Association for Unmanned Vehicle Systems International (AUVSI), which highlights some of the latest news and headlines in unmanned vehicles and robotics, learn about a keynote address from the Automated Vehicles Symposium, in which U.S. Department of Transportation Secretary Elaine Chao urged the autonomous vehicle community to educate the public. Additionally, learn about an initial operational test and evaluation of the U.S. Navy’s newest unmanned aerial system (UAS).

In this week’s roundup from the Association for Unmanned Vehicle Systems International(AUVSI), which highlights some of the latest news and headlines in unmanned vehicles and robotics,learn about a keynote address from the Automated Vehicles Symposium, in which U.S. Department of Transportation Secretary Elaine Chao urged the autonomous vehicle community to educate the public. Additionally, learn about an initial operational test and evaluation of the U.S. Navy’s newest unmanned aerial system (UAS). 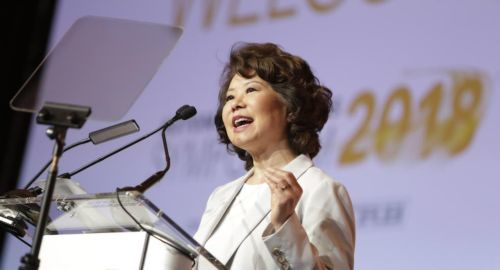 The "quite brilliant" engineers and technologists who are developing automated vehicles need to "step up and educate the public about this new technology" to boost confidence, U.S. Department of Transportation Secretary Elaine Chao said Tuesday.

"Without public acceptance, automated technology will never reach its full potential," Chao said in her keynote address at the Automated Vehicles Symposium’s first full day. "Consumer acceptance will frame the limitations to growth of this technology, so we all need to work together to get it right."

The DOT held a "listening session" in March to get input on the autonomous revolution, covering topics including accessibility, public safety, insurance and liability, jobs, cybersecurity and public outreach.

The people who are developing and regulating the technology have various concerns, Chao said, including how automated vehicles will interact with first responders in emergency situations; how to accommodate people with different types of disabilities; what new types of insurance might be needed; how to handle vehicle data; and workforce issues.

Automated vehicles can open up jobs for people with disabilities, "but can render other jobs obsolete," Chao said. As a former secretary of labor, "I am extremely concerned about the workforce issues. The transition period can be quite difficult for dislocated workers. This needs to be addressed on a societal basis."

The full report was released on Tuesday, and is available here: www.dot.gov/av

Although there are numerous challenges and issues facing the widespread adoption of automated vehicles, "one thing is certain," Chao said. "The autonomous revolution is coming." For regulators, "our responsibility is to understand it and help prepare for this new future."

The challenges are both legal and technical, but the "greatest and deepest" revolve around public acceptance, which is why Chao called on the audience members to share their work with consumers.

"This may be the biggest challenge of all: will the public accept, trust and adopt AV systems?" she said.

After the recent Uber test crash that killed a pedestrian, public concern about self-driving vehicles spiked. Even before that, large majorities polled are in favor of safety regulations for automated vehicles.

"The public is increasingly expecting the public and the private sector to lead by working together to safely develop, test and integrate this new technology into our existing transportation system," Chao said.

She said the DOT has safety as its highest priority, and its approach will be "technologically neutral, not top down, not command and control," she said. "We will not pick winners and losers among the developers of these technologies. The government is not that smart."

The department also will work with states and localities to avoid creating a patchwork of rules that could hamper automated vehicle development, Chao said. 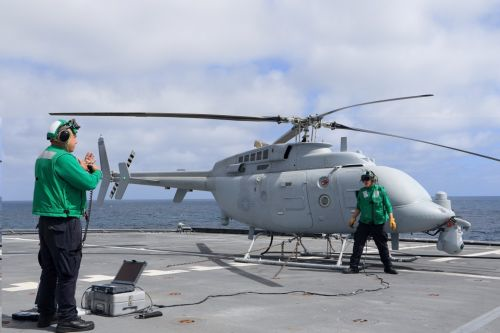 ​The results from the IOT&E will help decision-makers determine how best to integrate the Navy's newest unmanned helicopter with littoral combat ships (LCS), as well as other platforms.

The MQ-8C Fire Scout performed a number of mission scenarios aboard Coronado off the coast of southern California during the IOT&E. Considered an important milestone for the LCS and Fire Scout programs, these operations demonstrated "cohesion between the surface and aviation platforms."

"The results, lessons learned, and recommendations reported on following this underway test period are absolutely invaluable to the future of the MQ-8C Fire Scout's mission effectiveness and suitability to perform that mission," says Lt. Cmdr. Seth Ervin, the lead for the VX-1 detachment aboard Coronado.

Simulated engagements were conducted by Coronado and VX-1 to evaluate Fire Scout's role in a variety of operations, including target identification, intelligence gathering and surface warfare operations.

Testing also focused on developing practices for simultaneously operating and maintaining both the MQ-8C Fire Scout and the MH-60S Seahawk. Results showed that simultaneous operations can be conducted, but these operations require "extensive planning and coordination across the ship."

"It has been challenging and rewarding to be one of the first maintainers afforded the opportunity to take both aircraft aboard the ship," comments Aviation Machinist's Mate Second Class Salvatore Greene, a member of VX-1. "Working together, we made the overall product more functional and efficient for the fleet."

The chance to contribute to technological and tactical improvements within the LCS community creates a "notable opportunity" for Coronado's experienced crew.

"My crew is excited to build upon their past experiences operating with Fire Scout and continue to improve our proficiency as a war-fighting team," says Cmdr. Lawrence Repass, the commanding officer of Coronado.

With a focus on maintenance and cyber, pierside testing of the MQ-8C Fire Scout will continue onboard Coronado throughout mid-July. Coronado is one of four designated LCS testing ships homeported in San Diego.

A "high-speed, agile, shallow draft, mission-focused surface combatant" designed for operations in the littoral environment, LCS is also fully capable of open ocean operations. As part of the surface fleet, LCS has the ability to counter and outpace evolving threats independently or within a network of surface combatants.