In this week’s roundup from the Association for Unmanned Vehicle Systems International (AUVSI), which highlights some of the latest news and headlines in unmanned vehicles and robotics, learn about the first American-made law enforcement tactical drone, details of the U.S. Department of Transportation’s UAS Integration Pilot Program, and an investment from Nationwide insurance in an AI and UAS technology company.

In this week’s roundup from the Association for Unmanned Vehicle Systems International(AUVSI), which highlights some of the latest news and headlines in unmanned vehicles and robotics,learn about the first American-made law enforcement tactical drone, details of the U.S. Department of Transportation’s UAS Integration Pilot Program, and an investment from Nationwide insurance in an AI and UAS technology company. 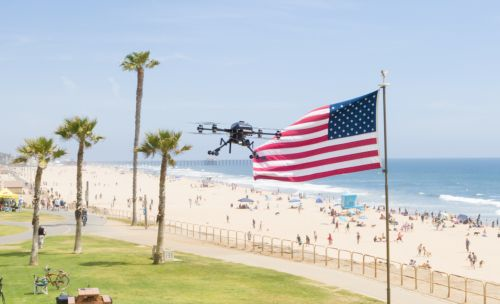 During the 29th Annual APSA Fly In Training, K2 Unmanned Systems LLC, which is a California-based commercial UAS manufacturer, flight ops and training company, unveiled its Knight Hawk UAS. The company says that the Knight Hawk is the first American made Law Enforcement tactical drone.

Designed with first responder operations and infrastructure inspection in mind, the Knight Hawk UAS is equipped with a variety of features including high pound payload capacity, infrared optics, and encrypted HD video downlink; all of which make it a useful tool in critical situations.

"We saw an opportunity to create positive change," says Jason Kamdar, Founder and CEO of K2 Unmanned Systems. "Society’s acceptance of drones now opens the door for first responders to use this emerging technology to enhance public safety."

K2 Unmanned Systems says that the Knight Hawk UAS uses a closed circuit system to make sure that telemetry data is protected when conducting flight operations and technical support is accessible anywhere in the United States.

K2 Unmanned Systems is now scheduling demos for companies and "key individuals" that show interest in purchasing the new UAS. 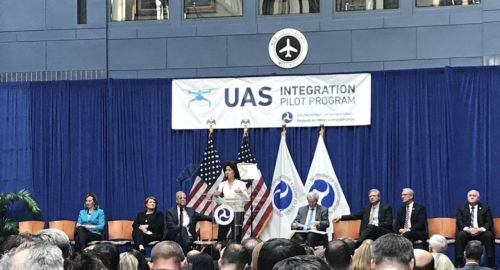 Ten state, tribal or local governments have been tapped to help expand the flight envelope of unmanned aircraft in the National Airspace System, the U.S. Department of Transportation announced on May 9.

Transportation Sec. Elaine Chao said the DOT had received 150 applications when the program was announced last year, which was tough to whittle down to 10. However, at a ceremony at the DOT headquarters, she said, "there are no losers in today’s announcement," and she has directed the FAA to explore ways of working with the other interested communities.

She noted that as of May 4, the U.S. has 1.1 million registered drones and more than 90,000 registered operators, a number that is growing rapidly.

"But we’ve got to create a path forward to the safe integration of drones if our country is going to remain a global aviation leader and reap the safety and economic benefits drones have to offer," she said.

"Instead of a dictate from Washington, this program takes a different approach," she said, by allowing "communities to test drones in ways they are comfortable with," at different times of day, and "across a variety of locations."

The pilot program is intended to let governments and their partners to push past the limitations of the small UAS rule, which doesn’t allow night flights, flights over people or flights beyond line of sight. The ten areas, and others who pursue similar work, can conduct expanded operations and then give feedback to the FAA on future rules and practices.

"The data the participants will collect on UAS operations will help shape a national UAS policy framework, including for a UAS traffic management system and expanded UAS operations such as flying over people or beyond line of sight," AUVSI President and CEO Brian Wynne said about the program. "We look forward to seeing the results of their work and the contributions these groups will make to keeping our skies safe."

For instance, Kansas officials said they would test a statewide unmanned traffic management system, powered by the LAANC (Low Altitude Authorization and Notification Capability), an automated flight authorization system that the FAA is rolling out across the country.

Other areas will try different options. Reno, with its partner, the drone delivery company Flirty, will test whether medical equipment like defibrillators can be carried quickly to people who need them.

The Memphis-Shelby County Airport Authority will continue working with drones to inspect their airport and aid in search and rescue operations in rural parts of the county, among others. And the mosquito control district in Florida wants to use drones to help find mosquito larvae before they become adults.

In an effort to "enhance its ability to write business and service claims" utilizing artificial intelligence (AI) and UAS technology, Nationwide is making a new venture capital investment in Betterview, an AI and UAS technology company.

According to Nationwide, its investment in Betterview is part of its commitment to finance more than $100 million of venture capital in "customer-centric solutions" that help members.

"Drones and artificial intelligence will play a critical role in meeting the needs of our customers in the future of both underwriting and claims response. It’s why we’re so excited about this partnership with Betterview," says Scott Sanchez, Nationwide’s chief innovation officer.

"These capabilities will drive faster response in the wake of catastrophic events, enhanced underwriting sophistication for day-to-day business and a better overall experience for our members."

Nationwide’s venture investment is being used to extend Betterview’s machine learning platform across more data sources to unlock "valuable insight" about commercial and residential properties for P&C insurers and reinsurers.

By analyzing satellite, aerial and UAS imagery, Betterview’s machine learning platform generates data and analytics on building and property conditions, characteristics, and potential hazards. An organization can use this information for things such as loss control and underwriting, as well as claims and catastrophe response.

"After assessing many other companies in the marketplace, we quickly noticed how Betterview’s experience translated into significantly better software, services, and data for insurers like Nationwide," explains Erik Ross, leader of Nationwide’s venture capital team.

"When we first met the team, their sole focus was on using drones to transform how buildings and properties were inspected. They have since evolved by enhancing artificial intelligence capabilities, building a mobile app, developing a roof risk score, and integrating various third-party data providers to put historical weather, property hazard risks, and building information at the customer’s fingertips."