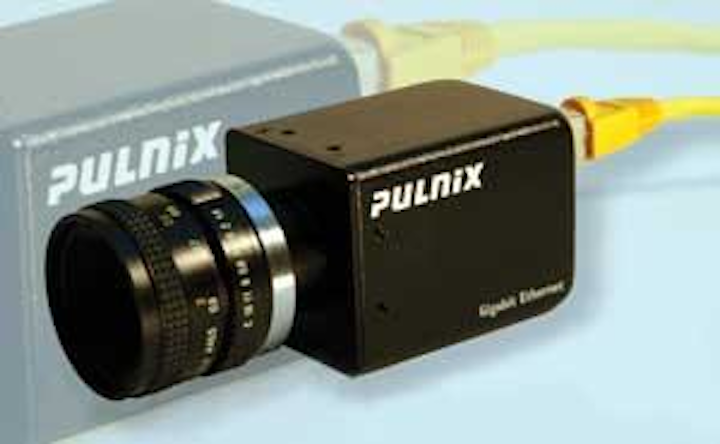 In the past, digital cameras using CCD or CMOS imagers simply captured images and transferred them over standard interfaces to the PC for processing. Camera designers paid little attention to storing, processing, and displaying data and transferring resulting pass/fail information to a PLC to control reject mechanisms on industrial automation systems. With the advent of smart cameras, this concept has changed dramatically.

Already, most solid-state cameras feature on-board LUTs, memory, gate arrays, and microcontrollers. Because of this, they can preprocess images, offloading this task from the host PC. Although preprocessing algorithms can be performed in these cameras, many designs still require more complex functions such as feature extraction to be performed on the host CPU.

Many smart-camera manufacturers often use inexpensive microcontrollers to allow the user to set up camera parameters though Ethernet, USB, or FireWire interfaces. And, while fully integrated PC-like cameras are available from a number of vendors, they are often larger, more expensive, and cumbersome than those based around simple data flow architectures.

Of the companies surveyed in the Vision System Design 2004 Worldwide Industrial Camera Directory (see Vision System Design, Sept. 2004, p. D1), more than 20 companies offered cameras featuring Ethernet interfaces. While Ethernet was, in most cases, not used to transfer image data between cameras and host PC, such interfaces did allow these cameras to be programmed remotely and act as stand-alone sensors in industrial automation systems.

With the introduction of Gigabit Ethernet (GigE) cameras and the forthcoming development of the Automated Imaging Association GigE standard, camera vendors are poised to introduce a number of products for industrial automation applications. In this year’s Worldwide Industrial Camera Directory survey (see Vision Systems Design, November 2005, p. D1), more than 20 companies stated that they use the GigE interface in their products. These cameras include linescan and area-array cameras and DSP and CPU-based smart cameras that can be used to off-load image-processing functions from the host frame grabber and CPU.

Interestingly, vendors building GigE cameras are taking advantages not only of benefits that the standard provides in industrial automation, but also the speed of Gigabit Ethernet itself. As vendors incorporate this interface, they are developing a number of products ranging from simple low-cost image transfer devices to fully integrated PC-like cameras.

In the machine-vision market, Bayer pattern decoding is already a feature of many cameras. JAI, for example, offers a version of its TM-6740GE VGA-format monochrome progressive-scan CCD camera with GigE output and on-board Bayer interpolation. To program the 640 × 480-pixel camera at frame rates up to 200 frames/s, camera parameters are uploaded from a PC to the camera and stored in EEPROM.

Matrix Vision also offers Bayer decoding as part of its mvBlueFOX USB 2.0 camera series. Targeted at applications that require up to 5-m camera/host distances, the cameras can transfer data at rates of up to 480 Mbits/s. To achieve longer distances and higher data rates, the company also debuted its latest GigE camera at Vision 2005. Targeted at networks with transfer rates up to 1 Gbit/s and distances up to 100 m, multiple GigE cameras can be directly managed via a switch from a supervisor PC. Acquired images can then be shared via multicasting throughout the network.

While many frame-grabber companies have been reluctant to design-in CPUs for fear of reduced product lifecycles, the same cannot be said for camera vendors. Using modular three-board and often two-board sets housed within the camera, these designers have partitioned the functions of image capture, preprocessing, and image-processing/camera-control functions neatly within single packages. In doing so, advances in FPGAs and processors can be relatively easily and quickly incorporated into the cameras.

While such functions as Bayer pattern decoding is already a feature of many cameras, the addition of these fast CPU and RISC-like processors will add a greater level of programmability. In the future, object-classification and statistical-analysis techniques will help such cameras recognize and interpret complex images. To address these issues, a number of vendors including Sony Electronics, Basler Vision Components, Matrox Imaging, and Tattile introduced their next generation of cameras at Vision 2005.

Leveraging from advances in integrated CPUs, DSPs, and memory components, these cameras are squarely targeted at system developers who require a fully integrated machine-vision system within a camera. Sony’s XCI-SXI, for example, features a 400-MHz AMD processor and 1.3-Mpixel sensor and runs at 15 frames/s, while the Basler Vision Technologies eXcite contains a 64-bit, 1-GHz processor running Linux, supports CMOS sensors ranging from VGA to 2 Mpixels, and features a GigE interface (see Fig. 2).

Also incorporating a 32-bit RISC processor, the LYNX Series from Imperx includes 16 different models, ranging from VGA to 11 Mpixels. Using an on-board FPGA, the dynamic range of the cameras can be maximized by selecting from an 8-, 10-, or 12-bit output, performing multiple LUTs on the image and/or dynamic function transfer correction. The image data can be output in different formats to suit the application, by inverting either of the taps. Programmable features include horizontal and vertical binning, resolution, frame rate, shutter, area of interest, and external triggering. To access the cameras for programming, serial communication can be performed through the GigE interface.

Aiming directly at the smart-camera market, Tattile’s Smart Reader M0 will incorporate lens and lighting into a Blackfin-based camera running the company’s operating system (see Fig. 3). With an Ethernet interface, the 200-frames/s VGA camera incorporates up to 16 Mbytes SDRAM and up to 16 Mbytes internal flash. At Vision 2005, the company also demonstrated the TAGplus, a high-performance camera incorporating an FPGA, an Intel Xscale processor, and two Blackfin DSPs from Analog Devices.

Like many PC-based frame grabbers, these cameras incorporate specialized processors or FPGA cores with which to perform specific functions. In some machine-vision applications, for example, JPEG cores will be used to overcome the bandwidth limitations encountered in multicamera applications. At Vision 2005, Tattile announced that JPEG compression support would be provided in its family of 13 TAG GigE-based cameras. “JPEG compression in the TAG cameras allows a higher imager frame rate to be transferred to a single PC. Alternatively, the camera’s on-board memory and processor can be used to buffer images and extract and compress only a region of interest,” says Robert Fenwick-Smith, managing director of Tattile.

GigE interfaces will not just be incorporated into area-array cameras. At Vision 2005, Dalsa demonstrated its latest Spyder GigE linescan camera (see Fig. 4). Boasting three times the responsivity and twice the speed of its predecessor, the camera is available in 1k and 2k resolutions and speeds of up to 80 MHz. Using Dalsa’s own QuickCam GUI interface provides access to all of the camera’s features. Delivering data rates of up to 1 Gbit/s with CAT5e cabling, the GigE interface supports point-to-point connections of up to 100 m.

For its part, Tattile also launched three GigE linescan cameras at Vision 2005, all based on Kodak CCD devices. These include a 2k trilinear camera based on the KLI 2113, a 4k trilinear based on KLI 4104, and an 8k monochrome version based on Kodak’s KLI 4104.

While a National Instruments’ LabView-enabled smart camera may be less than a year away, camera vendors will look to leverage other standards and high-volume components to make their cameras more user friendly. These will include incorporating the 1394TA deterministic FireWire standard, Power-over-Ethernet, the IEEE-1588 network timing standard, and the forthcoming GigE standard into their products.

Although many camera vendors support the standard IEEE GigE standard, others are taking a wait-and-see attitude when it comes to adopting the future GigE standard now being finalized by the Automated Imaging Association (AIA). To speed this acceptance, Pleora Technologies will next year release a multimode driver to handle the full spectrum of connectivity requirements in today’s vision systems-from lower-performance TCP (Transmission Control Protocol)/IP connections to high-throughput, CPU-efficient data streaming via Pleora’s iPORT IP transport protocol or the GigE Vision stream protocol (a key element of the AIA’s GigE Vision standard).

According to Pleora, the new driver will support this range of transport protocols while running on almost any GigE network interface card (NIC). When high-performance protocols are used, the driver will transform the underlying NIC into a conduit to PC user memory, while consuming little of the computer’s CPU capacity.

Today, system integrators are looking for system suppliers to provide them with more than CPU and DSP development tools from third-party vendors with which to program their cameras. They are demanding higher-level programming interfaces running on host PCs to develop more sophisticated image processing routines that can then be downloaded into inexpensive smart cameras.

Already cameras such as Matrix Vision’s Ethernet-based mvBlueLYNX and the Iris P-Series from Matrox incorporate embedded PowerPCs and real-time operating systems. Matrox has leveraged this architecture to allow system integrators to program its camera using familiar Windows development tools including the Matrox Imaging Library. Likely as not, other smart-camera vendors will look for software support from third-party suppliers of PC-based machine vision software-a move that will further blur the landscape between machine-vision systems and smart cameras.