Researchers use holography techniques for image processing, storage, and display

Holography uses a coherent laser to record light as it is reflected from an object. By merging the object beam with a reference beam, an interference pattern is generated and recorded on a film plate. When this film is re-illuminated at the same angle at which it was originally struck by the reference beam, the light is bent by the film emulsion and reflects a recreation of the original imaged object (see Fig. 1). 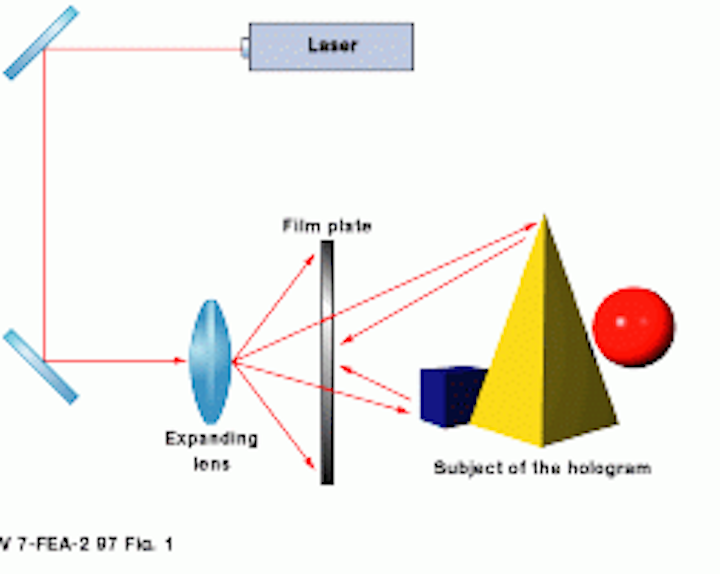 Researchers use holography techniques for image processing, storage, and display

Holography uses a coherent laser to record light as it is reflected from an object. By merging the object beam with a reference beam, an interference pattern is generated and recorded on a film plate. When this film is re-illuminated at the same angle at which it was originally struck by the reference beam, the light is bent by the film emulsion and reflects a recreation of the original imaged object (see Fig. 1).

In 1947, the British/Hungarian scientist Dennis Gabor developed the theory of holography while working to improve the resolution of electron microscopes. When the helium-neon laser was invented in the 1960s, it allowed the production of holograms of large reflective objects, rather than the microscopically small objects that had only been previously possible.

Today, the most common use of holography is in advertising, packaging, and credit cards. Holograms have even been placed on soft-drink packages, book covers, and identification cards. In the future, the technology is expected to be applied in more interesting applications, such as for optical-computer, holographic-storage, holographic-telecommunication, and medical-imaging systems.

Holograms illuminated with ordinary white light are categorized into two groups: transmission and reflection. Transmission holograms are illuminated from behind the film--light travels through the film to the viewer`s eyes. Such holograms range in size from a few square inches to 4 by 8 feet. A recent technology breakthrough offers even larger sizes for display applications. These holograms can be either monochrome when illuminated with a laser or arc lamp, or multicolored when lit with a white-light source.

Reflection holograms are illuminated from in front of the film--light reflects from the hologram back into the viewer`s eyes. These holograms--the most popular and commonly viewed types--can be layered with more than one image and with color.

Embossed holograms are white-light transmission types. They are backed by a metallized mylar mirror and are viewed the same way as reflection holograms. Low-cost mass-produced applications, such as direct-mail pieces, catalogs, and brochures, use this format. The newest type of hologram available for mass-produced items is based on Polaroid Mirage Film. It is produced by exposing an emulsion on plastic film.

Multiplex holograms comprise a series of exposed photographs or motion picture frames. For example, exposing a 360° view of a subject requires a three-frame-per-degree movement for a total of 1080 frames. After the film is developed, a laboratory process produces a series of "slit" holograms using each frame of film as the subject for each slit of holographic film. This process lends itself to fast operation, whereby a machine exposes a slit hologram for each frame at a very rapid rate. In this manner, holograms can be produced from film-captured images without the need for a pulsed ruby laser.

Holographic data storage uses lasers to store information as "pages" of electronic patterns within a small volume of material. Because a million or more data bits are placed on each page and thousands of pages can be stored in material no larger than a small coin, holographic data-storage systems offer the possibility of compact devices holding trillions of bytes of information.

What`s more, be cause holography uses no moving parts, and all the information in each page can be accessed simultaneously in parallel, the technology holds the potential for very-high-speed access to all of the stored data.

The latest system developed by IBM Almaden (San Jose, CA) scientists occupies 18 ¥ 24 inches and contains optical and electro-optic components that allow "bit-error-rate" studies, the standard measure of how reliably data can be written and read. By the end of last year, IBM scientists had recorded and retrieved 6.5 million bytes from one hologram without any errors. This demonstration system complements another built at Rockwell that is capable of read-only optical access. A single HDSS demonstration system is expected before 1999.

Holographic techniques are also teaming up with neural-networking technologies to develop next-generation computer systems. Although they have been proven effective, electronic neural networks still need a two-dimensional interconnect system that would occupy most of the area of any neural processor chip implementation.

Because optical components are connected in free space, they offer an alternative to electronic interconnects. What`s more, the parallelism and storage capabilities of optical systems make them suitable for neural-network applications. In such systems, two-dimensional (2-D) and three-dimensional (3-D) holographic interconnects play an important role. Holographic film can be used, for example, to connect an input layer of neurons to an output layer and to record the connection weights between the neurons.

All these features add up to impressive processing capability. Working at the Pacific Northwest National Laboratory (Richmond, WA) and at the University of Arizona, respectively, Paul Keller and Arthur Gmitro have demonstrated a neural-network system designed with holograms and optoelectronic-based neurons that can achieve processing rates from 45 trillion to 720 trillion interconnections per second. "Optically implemented neural networks are still many years from being used in practical systems. This is due to the immaturity of the technology, cost of development, and the lack of problems that need this technology (for example, very fast pattern recognition)," said Keller.

In the MIT display, computed fringes traverse the aperture of an acousto-optic modulator (AOM) after radio-frequency processing. These fringes are used to phase-modulate a beam of laser light. Next, a vertical scanning mirror reflects the diffracted light to the correct vertical position in the holographic plane. Then, a horizontal scanning system angularly multiplexes the image of the modulated light. Lastly, a lens system demagnifies the diffracted light at a plane in front of the viewer.

A major advantage of the scanned AOM system, according to Mark Lucente, a researcher at IBM`s Thomas J. Watson Research Laboratory, who formerly worked at MIT, is that it can be scaled-up easily. The first images produced by the system were just 50 mm in width, height, and depth. More recently, a 36-Mbyte display system has been developed that is producing images nearly 100 mm in width, height, and depth.

Aside from computing, display, and storage applications, holographic telephones and printers are envisioned to become as prevalent as today`s microprocessors during the next 20 years. However, their applications will have to wait until complementary technologies such as high-bandwidth fiber-to-the-curb com munication systems and very-high-performance computers become available.

Dave Wilson is a science writer in London, England.

FIGURE 1. In a plain hologram recording system, the expanded beam from a laser is transmitted through a recording film plate to illuminate the subject of the image. Light reflected from the subject also illuminates the film plate. The interference pattern created at the intersection of the original laser beam and the reflected light is recorded on the film. After film development and with proper illumination, the recording can create a three-dimensional image of the subject.

In operation, Voxel`s system incorporates all the slices from CT or MRI equipment into a single hologram, which, when displayed on a special light box, provides an accurate replication of the object being examined. That is, a 3-D x-ray looks like a solid, but transparent, model of the patient`s anatomy.

Voxel`s system comprises three elements: the Voxcam, the Voxbox, and special film. Together, they enable physicians to produce and examine Voxgrams, the 3-D medical images produced by the system. The Voxcam, or holographic camera, is a laser-driven optical instrument that receives electronic images collected by CT and MRI scanners. It then projects the images using a liquid-crystal display and records them onto film. Each image from a scan is individually exposed in sequential fashion and in its proper location. All the exposures are recorded on a single piece of film. The film is then developed in an attached automatic-operating processor.

Once the film has been processed, it is displayed on a special lightbox called a Voxbox. The Voxbox is a self-contained, portable unit similar in appearance to the lightboxes used by medical practitioners for viewing conventional 2-D film. It uses ordinary white light instead of laser light to reconstruct the hologram.

The film used to make Voxgrams shares many characteristics with those of ordinary x-ray film. However, its composition and the proprietary process used to encode information make it possible to record more than 200 slices from a CT or MRI examination on a single sheet. An exposed and developed Voxgram is a 14 ¥ 17-in. sheet of film that reveals only a faint glow when held up to ambient light. When placed upon the Voxbox, it displays a detailed 3-D image that stretches through a 6-in.-deep volume.

The Voxcam camera records holographic images. It encodes the depths and intensities for each exposure so that, when reconstructed, all the slices appear "hanging" in space with the correct separation between them. This technology can generate multiple-exposure holograms that contain upwards of 200 exposures.

Life-size Voxgram holograms extend outward in space so that physicians can interact in, around, and through the transparent images as if they were real specimens of anatomy.