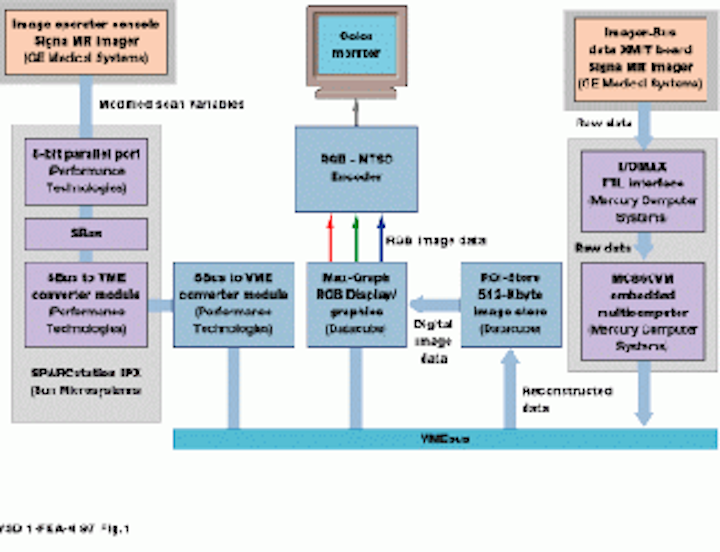 At the Mayo Clinic (Rochester, MN), an MRI system has been developed for interactive fluoroscopy that generates and continuously displays real-time MR images. "This lowers MRI procedure times," says Dr. Stephen Riederer, director of the Mayo Clinic MRI Laboratory, "and saves time and money." The clinic already has one system in operation and plans to implement a second within a few months.

All MRI systems use electromagnetic properties of atomic nuclei such as hydrogen to produce images. When placed in a high magnetic field, these nuclei absorb and release energy. When the human body is placed in MRI systems, radiated energy reflects the characteristics of different tissue types such as fat, muscle, and gray matter.

Magnetic-resonance-image quality is dictated by molecular physics. "As acquisition times become shorter, the signal-to-noise ratio (S/N) of the sensors decreases because tissue examined by MRI scanners does not have sufficient time to discharge," says Riederer. The Mayo Clinic MRI system compensates for this lower S/N by rapidly and continuously collecting and reconstructing image data. According to Riederer, this technology can be used in virtually any commercially available MRI scanner.

In conventional MRI systems, the patient lies in the unit`s magnetic-field generator or gantry, while the operator controls software that loads magnetic-pulse sequence instructions into the machine. Each scanning process takes several minutes, during which the data are acquired, reconstructed, and displayed for the operator to analyze. Unlike x-ray or ultrasound images that can be produced in less than 30 ms, magnetic-resonance images take up to two minutes to construct, with 3-D volume data sets taking as long as 20 minutes to collect.

By operating at higher frame rates at lower resolution, the Mayo Clinic fluoroscopy system can shorten image-acquisition times. Operators can then adjust these images interactively prior to performing higher-resolution, time-consuming scans.

According to Riederer, the technique is analogous to x-ray fluoroscopy, where radiologists use lower-quality imagery and real-time feedback to adjust the imager`s field of view prior to higher-radiation, shorter-frame-rate image acquisition.

At present, radiologists are using interactive MR fluoroscopy to perform double-oblique-plane imaging of heart ventricles, a procedure that localizes individual 5-10-mm cross-sectional views of the organ.

With standard scanners, these views have typically required six to eight minutes for an operator to set up and perform. Much of this time is consumed in image reconstruction and manipulating static images with graphical tools. With the Mayo Clinic`s system, operators can view live images of the heart while interactively adjusting imaging angles and selecting parameters for either short- or long-axis scans. According to Riederer, the system has reduced localization times for double-oblique angle scanning to 50 s.

Higher-resolution slice-image acquisition is synchronized with the cardiac cycle, so that imaging occurs only when the heart is relatively static. Because each acquisition typically requires 300 ms, enough data for one image are collected in two cardiac cycles. Riederer sees these data-acquisition times eventually reaching 100 ms.

In the Mayo Clinic`s MRI system, images are captured using a 1.5-Tesla Signa MR imager from GE Medical Systems (Milwaukee, WI). This captures 16-bit data to a custom-designed interface board that operates at rates up to 250 kbyte/s. Then, data are passed to an I/O-Max data port from Datacube (Danvers, MA), where they are converted to floating-point format and stored in buffer memory (see figure).

"The high-speed input port is a critical element in the design of the system, because it accepts data at any rate and in large amounts," says Riederer. The 80-MFLOPS MC860 then performs a 2-D fast Fourier transform (FFT) on the data, performing filtering, region-of-interest analysis, and image generation. The image is then transferred over the VME bus to the image-storage board. A complete image can be acquired and processed in 750-800 ms.

An SBus-to-VME converter module connects the VME chassis to a 25-MHz SPARC IPC workstation from Sun Microsystems (Mountain View, CA). This controls the MR scanner and manages image-slice location and orientation. The MR imager is controlled over an 8-bit parallel port from the workstation to the operator`s console.

The MC860, running a Mercury Computer Systems (Chelmsford, MA) MC/OS operating system manages data collection and image processing. Both the MC860 and workstation run C-based software, with the workstation spawning the MC860`s programs at runtime. Interprocessor communication is shared via memory resident on the MC860.

"It`s too early to predict overall patient cost-per-scan benefits for the system," says Riederer, "but the practical benefits of the system have already been demonstrated." Advanced MR fluoroscopy gives physicians a noninvasive way to image blood flow in the liver or look into soft tissues such as the brain without the need for injecting contrast enhancing materials."

Two subsystems are used in the design of the Mayo Clinic`s MRI system. A SPARCStation is used to provide the operator interface, while a VME-based image processor forms the heart of the image capture and reconstruction system.

The Health Images Hi-Star MRI system uses a 100-MHz Pentium CPU with 32-Mbyte memory running Windows/NT as its workstation controller. In operation, data from an MR imager is transmitted by fiberoptic link to the SkyStation`s SKYburst I/O module.

To process the data, 200-kyte blocks of data are routed in a round-robin fashion to the local memory of each of the three i860s handling input filtering. Preprocessing functions include a data convolution, finite impulse response (FIR) filter and a one-dimensional fast Fourier transform (FFT) along the x axis. Image reconstruction is executed on a separate i860 processor after a frame of data has been stored in memory. Processing includes a one-dimensional FFT along the y axis, calculation of the magnitude of each point, and the conversion of images from floating point to 16-bit integer.

Two-dimensional image manipulations such as panning and zooming and 3-D volume visualization are handled by the second Shamrock II daughtercard with an i860 dedicated to each of four image sections. The 320-Mbyte/s Skychannel packet bus in conjunction with each i860s DMA engine moves images from bulk memory to the processors for real-time manipulation.

All images are displayed on a single 21-in. 1600 X 1200 monitor from Image Data Systems (Hopkins, MN) driven by a display controller from Dome Imaging Systems (Waltham, MA). According to Scott, although color displays could be used, it is not necessary because shades of gray are the most important features in magnetic resonance imaging.