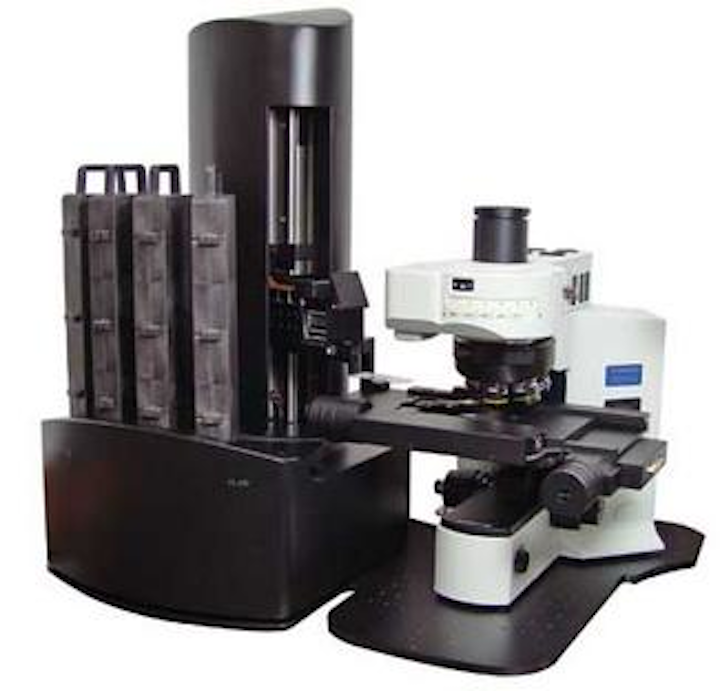 In developing automated production systems for biomedical, semiconductor, and factory automation systems, developers must often couple machine vision or imaging systems with automated positioning equipment. In biomedical systems, for example, where numerous samples must be analyzed, tissue or blood samples are often prepared manually and examined individually under a microscope. Such procedures are by nature repetitive and tedious, subject to human interpretation, and thus may result in false positives.

To overcome the repetitive analysis of operations, Prior Scientific (Rockland, MA, USA; www.prior.com) has developed a first-generation automated slide loader system, the PL-200, that the company will initially market to system integrators developing automated slide handling and analysis systems (see figure). As a semiautomated system, the slide loader presents the operator with up to four removable slide racks, each of which can be loaded with up to fifty 75 × 25-mm glass slides (watch the video below).

Using the slide loader, each of these slides can be then automatically picked and placed by the PL-200 into position onto Prior Scientific’s Proscan x-y positioning stage. Using this stage, the slides can then be moved into the field of view of a number of available optical microscopes including those from Nikon (Melville, NY, USA; www.nikoninstruments.com), Olympus (Center Valley, PA, USA; www.olympusamerica.com), Leica (Wetzlar, Germany; www.leica-microsystems.com), and Carl Zeiss (Thornwood, NY, USA; www.zeiss.com). By using this motorized stage, each slide can be stepped under the microscope with a positional accuracy of 0.5 μm and image data captured and automatically analyzed.

“In the design of the system,” says James Hunt, senior product marketing manager, “we recognized that potential OEMs may wish to customize the performance of the PL-200.” Because of this, the design of the slide loader incorporates a number of features, which, although initially targeted toward semiautomated slide scanning, could potentially be used in fully automated slide scanning systems and other markets. In the design, for example, the system incorporates three synchronized stepper-motor-driven stages to accurately move each slide from its initial position on the slide rack to the Proscan positioning stage.

While the first of these stepper motors rotates the turret of the slide loader in the x-z plane, the second is used to move a pick-and-place arm in the x-y direction to the first location of the initial slide to be picked on the y-axis. After this, a third stepper motor moves the pick-and-place gripper in the z-axis to pick the first slide. Once picked, the arm is retracted and the turret moved to place the slide onto the Proscan positioning stage.

During this process, an optional MINI barcode reader from Microscan (Renton, WA, USA; www.microscan.com) can read any barcodes that may be present on the slide and this data along with any later image analysis data is transferred to the system’s host PC.

With a loading speed of 24 s per slide, the PL-200 also incorporates two sensors to detect whether a slide is present in the gripper or Proscan position stage. Another sensor monitors the vertical position of the microscope stage. In this way, the risk of damaging a slide during picking, placing, and image analysis is minimized.

“By developing the system in this way,” says Hunt, “it is possible, for example, to incorporate a robotic-based slide feeder into the system that would be capable of automatically loading slides from an external source into either the slide racks or directly to the microscope’s Proscan x-y positioning stage. Similarly, for other types of applications such as wafer-handling systems, the system could instead be equipped with Bernoulli or vacuum grippers to automate the wafer-handling process.”

While initial prices for the PL-200 slide loader will be set at approximately $25,000, the loader will also be offered with the Proscan x-y positioning stage for an additional $10,000.