California-based artificial intelligence (AI) company Embodied Intelligence is developing AI software that can be loaded into existing robots that enables users to program a robot by wearing a virtual reality headset and guiding the robot through a task. 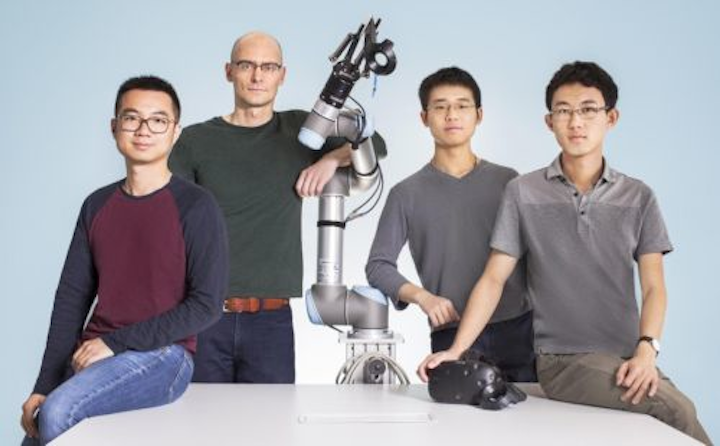 California-based artificial intelligence(AI) company Embodied Intelligence is developing AI software that can be loaded into existing robotsthat enables users to program a robot by wearing a virtual reality headset and guiding the robot through a task.

Unlike traditional robot programming—which requires code writing—this format enables anyone to teach robots new skills, according to the company. The idea has caught the attention of investors, as Embodied Intelligence has raised $7 million in seed funding led by Amplify Partners with participation from Lux Capital, SV Angels, FreeS, 11.2 Capital and A.Capital.

"Recent breakthroughs in AI have enabled robots to learn locomotion, develop manipulation skills from trial and error, and to learn from VR demonstrations. However, all of these advances have been in simulation or laboratory environments," says Sunil Dhaliwal, General Partner at Amplify Partners. "The Embodied Intelligence team that led much of this work will now bring these cutting-edge AI and robotics advances into the real world."

This capital will be used to develop the AI software to easily teach robots new, complex skills, according to the founders, who have a combined 30 years of experience in artificial intelligence, deep learning, and robotics.

Demonstrations performed by people are used to train deep neural nets, which are further tuned through reinforcement learning, resulting in robots that can "easily be taught a wide range of skills in areas where existing solutions break down," according to the company. Embodied Intelligence cites tasks such as the manipulation of deformable objects, assembling components, and picking parts and order items from cluttered areas as examples of candidates to benefit from the software.

"Traditional robot programming requires substantial time and expertise," says Pieter Abbeel, President and Chief Scientist of Embodied Intelligence. "What we will provide is an AI layer that can be added to any existing robot, enabling robots to learn new skills rather than requiring explicit programming."