NVIDIA introduces robot virtual simulator for training prior to deployment

During his keynote at the GPU Technology Conference on May 10, NVIDIA CEO and founder Jensen Huang introduced the NVIDIA Isaac robot simulator, which utilizes video game and graphics technologies to train robots in simulated real-world conditions before deployment. 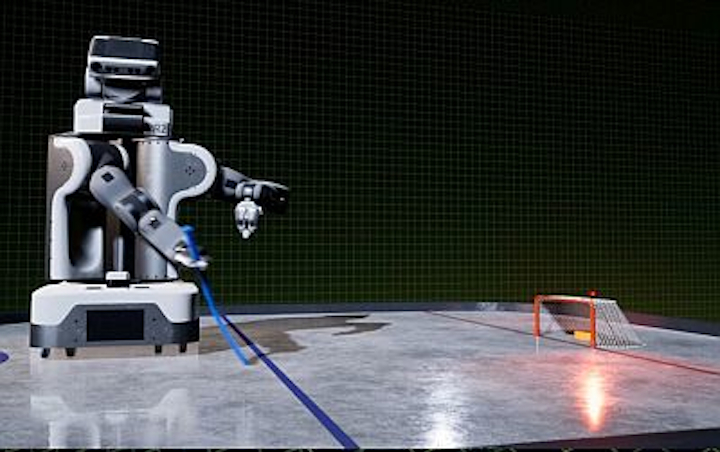 During his keynote at the GPU Technology Conference on May 10, NVIDIA CEO and founder Jensen Huang introduced the NVIDIAIsaacrobot simulator, which utilizes video game and graphics technologies to train robots in simulated real-world conditions before deployment.

Isaac provides an artificial intelligence-based software platform that enables teams to train robots in highly-realistic virtual environments, and then transfer that knowledge to real-world units, according to NVIDIA.

"Robots based on artificial intelligence hold enormous promise for improving our lives, but building and training them has posed significant challenges," Huang said. "NVIDIA is now revolutionizing the robotics industry by applying our deep expertise in simulating the real world so that robots can be trained more precisely, more safely and more rapidly."

NVIDIA’s Isaac is built on an enhanced version of Epic Games’ Unreal Engine 4 and uses NVIDIA’s simulation, rendering, and deep learning technologies. Within this virtual environment, developers can set up extensive test scenarios using deep learning training, and then simulate them in minutes. Upon completion of a simulation, this information is transferred to real-world robots, where developers can then iterate and tweak the robot testing methodology, trading intelligence between the two environments, per NVIDIA.

Furthermore, NVIDIA also announced that, to accelerate the development of advanced robots on the Jetson platform, its partners are releasing open-source reference platforms for drones, submersibles, robots, autonomous vehicles, and other devices. Among the companies releasing such platforms are Toyota, Teal, Enroute Lab, and various universities and academia.