Altia Systems has launched its Intelligent Vision 2.0 suite of artificial intelligence software products for its PanaCast 2 panoramic camera, which will be used to automate workflows by accurately counting people and creating “big data” for data science applications through industry-first Intel Architecture-based intelligence, according to the company. 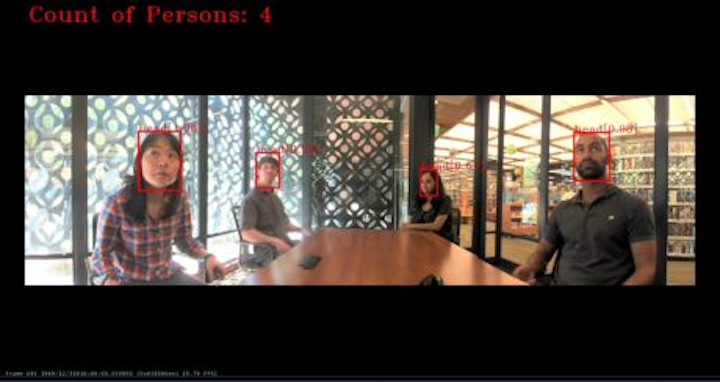 Altia Systems has launched its Intelligent Vision 2.0 suite ofartificial intelligencesoftware products for its PanaCast 2 panoramic camera,which will be used to automate workflows by accurately counting people and creating “big data” for data science applications through industry-first Intel Architecture-based intelligence, according to the company.

Intelligent Vision 2.0 is designed for the PanaCast 2 camera, which is a panoramic camera system with three separate imagers. To capture images from all three imagers and to provide panoramic video, the PanaCast features a patent-pending Dynamic Stitching technology, which does an analysis of the overlapping image. Once the geometric correction algorithm has finished correcting sharp angles, the Dynamic Stitching algorithm creates an energy cost function of the entire overlap region and comes up with stitching paths of least energy, which typically lie in the background, according to Altia Systems.

The computation is done in real time on a frame-by-frame basis to create the panoramic video. Each video frame is 1600 x 1200 pixels from each imager and joining these frames from three imagers together creates a 4800 x 1200 image. Each imager in the PanaCast 2 camera are 3 MPixel CMOS image sensors that can reach up to 30 fps in YUV422 and MJPEG video format.

Intelligent Vision 2.0, which was developed in collaboration with Intel, was trained with a dataset containing more than 150,000 people and is capable of detecting and counting more than 100 people up to 40 ft. away from the camera. This was developed, according to Altia Systems, to automate workflows and help businesses with resource management, such as buying less real estate after your camera tells you that 35% of your current office space is not being used. Use cases go beyond this space and into advertising analytics, for example, to detect how many people view a digital advertisement on various days of the week.

The Intelligent Vision 2.0 product suite include: