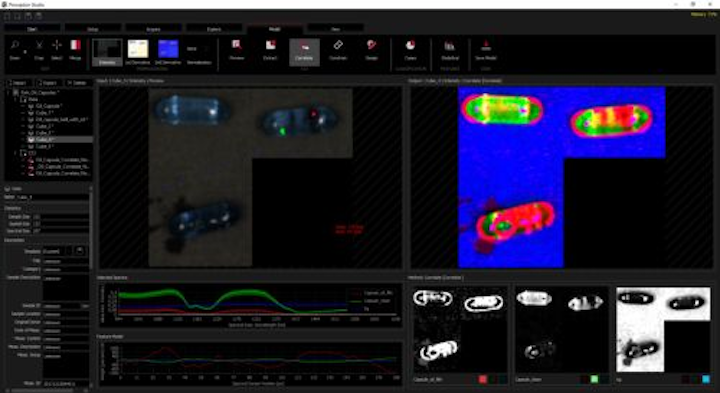 In the test, which was performed free of charge with Perception Park’s own samples, two fish oil capsules were prepared as a sample. One capsule was slightly cut, causing some fish oil to leak onto the surface, while the other was undamaged and clean. In order to determine if hyperspectral imaging could be used for this detection, Perception Park utilized a "chemical color imaging setup," which consisted of Perception Core, Perception Studio, and an FX17 hyperspectral camera from Specim.

Perception Core software is the run-time engine that enables the live translation of camera raw data into molecular information described by machine vision information such as a color stream according to a loaded run-time job. Perception CORE also supports the interfacing and control of hyperspectral cameras and communication with a client application by standard industrial interfaces. Perception Studio is a PC-based software suite for hyperspectral data acquisition, exploration, and modeling, and offers a plug-and-play solution for camera integration, standardization, and calibration.

Specim’s FX17 hyperspectral camera is an InGaAs-based camera with a spectral range of 900 – 1700 nm and free wavelength selection from 230 bands within the camera coverage. At full frame, the camera can reach 670 fps, and with 4 bands selected, can reach 15,000 fps. The camera is available with a Camera Link or GigE Vision interface and comes with factory-loaded unified wavelength calibration that produces unit-to-until compatible data output.

After scanning the gel capsule samples with the hyperspectral camera, the data sets were merged to one set. Representative spectra sets were selected in the above image with the blue-shaded capsules. In the image, red represents spectra of the capsule with fish oil on the surface, green represents the clean capsule, and blue represents the spectra of the background. The spectral differences between the clean capsule and the capsule with fish oil on it is quite big, and is obvious in the spectral view, noted Perception Park.

When applying its chemical color imaging methodology "Correlate," Perception Park was able to show that it can be clearly seen that parts with the fish oil film on the surface appear in red, while the clean parts are green. Perception Park noted that even in the green images, some red came through despite the capsule being clean. After applying various pre-processing methods in an attempt to improve the results, the borders of the green (clean) capsules still appeared red. Perception Park says that this is based on reflections and is potentially something that could be improved with a better setup design.

Perception Park’s Case Discrimination methodology was also applied to see if it might be possible to find a classifier for the parts with the oil film on the surface. Using this method, it was possible to see the oil film, but again, the reflections on the borders once again appear.

During the process, the Perception Park team also noticed an additional defect. In the capsule that was cut, some air made it inside, which appeared in some of the images. By applying pre-processing techniques, the defect became even more visible. However, be applying the "Correlate" or "Case Discrimination" methodology, the air bubble could be clearly identified.

In conclusion, Perception Park found that—using its chemical color imaging methodology—it was possible to identify fish oil on the surface of the capsule, as well as air bubbles inside of the capsule. These results—according to the company—are valid for the tested capsules, tested under the used measurement conditions, and for other capsules, this must be verified.