Designers, developers and integrators of LED illumination products can take advantage of the numerous LED products that span the UV, visible and infrared spectrum. 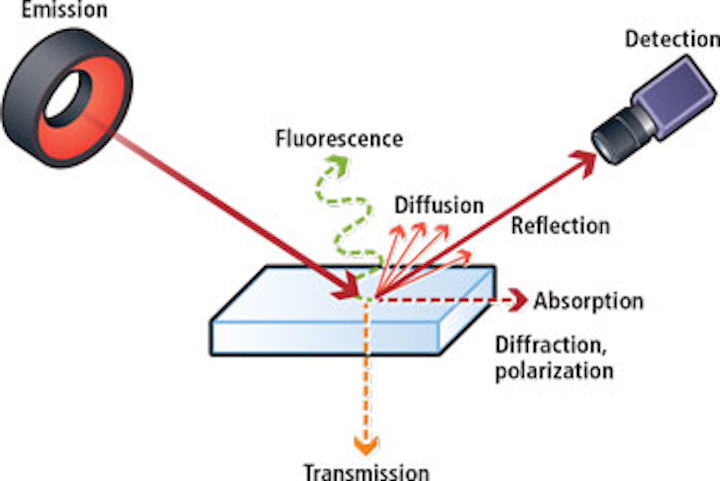 Designers, developers and integrators of LED illumination products can take advantage of the numerous LED products that span the UV, visible and IR spectrum.

In an article in McGraw Hill's Electronics magazine in April, 1965, Gordon E. Moore, then Director of the Research and Development Laboratories at Fairchild Semiconductor wrote that the complexity of minimum component costs had increased at a rate of roughly a factor of two per year (see "Cramming more components onto integrated circuits"; http://bit.ly/VSD-MOORE). What is now known as Moore's law has been interpreted as stating that the number of transistors fabricated on an integrated circuit (IC) doubles every two years.

In a similar prediction for light-emitting diodes (LEDs), Roland Haitz and Fred Kish, then with Hewlett-Packard, and Jeff Tsao and Jeff Nelson of Sandia National Laboratories (Albuquerque, NM, USA; www.sandia.gov) wrote in 2000 that in a Moore's-law-like fashion, flux per unit has been increasing 30 times per decade and the cost per unit flux decreasing 10 times per decade (see "The case for a national research program on semiconductor lighting" http://bit.ly/VSD-SANDIA). Certainly, as Haitz and his colleagues predicted, in consumer, scientific and machine vision applications the introduction of LED devices that span the spectrum from ultraviolet (UV), through visible to infrared (IR) has led to a decline in applications that previously used incandescent and halogen lamps.

Designers wishing to build OEM products based on devices such as this, however, may find that the alternative form-factors offered by many of these vendors hampers their development tasks. Recognizing this, the Zhaga Consortium (Piscataway, NJ, USA; www.zhagastandard.org), a collaboration of 90 companies, has been established to standardize components of LED light engines, LED modules and LED arrays. With the aim of removing arbitrary and unnecessary variations in properties such as physical dimensions, the Consortium has developed a set of interface specifications, known as Books, which define the conditions necessary for component interchangeability. Hopefully, for developers of illumination systems for use in the machine vision and image processing market, such specifications will allow products to be developed in a more efficient and cost-effective manner.

In choosing LEDs for any particular lighting product, developers of lighting components must still evaluate the photometric and/or radiometric parameters of such devices. LED manufacturers specify their LED components in different ways. While radiometric measurements such as radiant flux, radiant intensity and radiance provide information about the amount of absolute power (or energy) emitted by such devices, photometric quantities based on luminous intensity are weighted by a spectral luminous efficiency function that represents the sensitivity of the human eye to the light at a given wavelength. Thus, while UV and IR LEDs are often specified in terms of radiometric power (measured in Watts), those that emit light in the visible spectrum are often specified in units of luminous flux or Lumens (lm).

While developers of machine vision lighting products evaluate the components they use using spectrophotometers, those that deploy such LED lighting must consider their application in detail. Here, an understanding of the wavelength required and the part to be illuminated will ensure that the illumination method reveals the information required and the correct camera is chosen to capture the image. Depending on the part to be illuminated, incident UV, visible or IR wavelengths may be absorbed or reflected by the object, transmitted through the object or polarized or diffracted at the surface. The incident energy may also cause the object to fluoresce (Figure 1).

In machine vision applications, visible LED lighting at specific wavelengths is often used to enhance the contrast of the reflected light from a part under test. Choosing the particular LED configuration and wavelength of light to use is highly application-specific and the optimal choice is dependent on the optical behavior of the part being illuminated.

LED illumination products are configured differently to enhance the contrast of the image of the part captured by the camera. While diffuse backlights are used in vision systems to capture images of parts that are silhouetted behind a bright background, front-side illumination techniques include bright field techniques to illuminate diffuse, non-reflective objects and dark field (low-angle) lighting to highlight an object's surface defects.

Such backlights, bright field and dark field lighting products are supplied in a number of different form factors and wavelengths to meet the needs of specific machine vision applications. Examples of backlights include the Edge to Edge backlight series from Microscan (Renton, WA, USA; www.microscan.com) which, with its modular design, allows multiple lights to be configured in a number of different sizes.

Bright field illumination, diffused flat, coaxial or dome-based products are often used where reflective, polished or glossy objects must be imaged. In some cases, a spotlight or a ring light can be equipped with a diffuser to accomplish this task. In others, the use of a coaxial incident light or dome light can achieve the contrast required. How these different lighting techniques can address the needs of specific applications can be found at http://bit.ly/VSD-VISDOC.

Examples of these include coaxial illumination products from iiM AG (Suhl, Germany; http://iimag.de) with its Lumimax line of LED-based coaxial lights and traditional dome-based lights from Smart Vision Lights (Muskegon, MI, USA; http://smartvisionlights.com) with its DDL Dome Light Series. While such traditional dome lights can be bulky, engineering the dome light into a "flat-dome" in its LFX2 Series, CCS America (Burlington, MA, USA; www.ccsamerica.com) uses a dot pattern placed on a diffusion plate to control illumination diffusion and transmission resulting in a uniformly-diffused light (Figure 2).

Just as many manufacturers offer backlights, bright field and dark field lighting products in different configurations, they are also supplied in various LED wavelengths ranging from the ultraviolet (UV) to the infrared (IR). For 400 - 700nm visible wavelengths, many machine vision applications employ LED lighting that emits light in the violet (380-450nm) through red (620-750nm) spectrum. Here, the choice of which wavelength (or color of light) is as important as the lighting configuration since the product being imaged will reflect and/or absorb various wavelengths differently.

For manufacturers of products that may vary in both color contrast and configuration, different lighting configurations and wavelengths may be required. For this reason, LED lighting vendors such as TPL Vision (La Chevroliè;re, France; www.tpl-vision.com) have created modular products that can be used in different configurations and wavelengths. TPL Vision's Square Light RGB, for example, comprises four independent swiveling bars, that can be used in both on-axis and dark field lighting modes. Since the light accommodates both RGB LEDs, it is useful in illuminating products with different spectral characteristics (Figure 3).

While visible light is currently used in many applications, different materials may also exhibit fluorescent properties. Thus, while an object being illuminated may absorb UV light and emit visible light, it may absorb visible light and emit IR, or absorb NIR and emit far IR. Thus, the emergence of LEDs in the UV and IR spectrum has resulted in new opportunities for both manufacturers of LED lighting products and developers of machine vision systems.

UV and IR lighting products can be used two ways in machine vision systems. In reflected imaging applications the IR or UV light is applied to the object and the reflected image captured. In IR or UV-fluorescence imaging, properties of the part absorb the UV or IR radiation and emit light at a different wavelength in what is known as Stokes shift (http://bit.ly/VSD-STOKES).

While UV LEDs are generally classed into UV-A (315-400nm), UV-B (280-315nm) and UV-C (100-280nm) bands, LED development in the UVC and UVB bands is driven by the medical (UVB) and purification and sterilization (UVC) industries, according to Jennifer Heathcote, Regional Sales Manager at Phoseon Technology (Hillsboro, OR, USA; www.phoseon.com). However, these UVC and UVB LEDs are currently low power, relatively inefficient, short lifetime devices that cost hundreds of times more than UVA devices.

Indeed, according to Matt Pinter, Director of Engineering, Smart Vision Lights, UV illumination may be an expensive proposition for some applications. To highlight the glue on envelopes, for example, may require a 280nm UV light. Because the glue absorbs this wavelength of light, it will appear black in the reflected image (Figure 4). Because such applications may require hundreds of these types of LEDs, they may currently be cost-prohibitive for LED lighting and more suitable for mercury-arc lamp illumination.

This, however, is not the case in the UVA spectrum as Vincent Forte, Chief Technology Officer at Marktech Optoelectronics (Latham, NY; www.marktechopto.com) points out in "Understanding Ultraviolet LED Applications and Precautions" (http://bit.ly/VSD-UV-LED). Here, such illumination is used in applications that include counterfeit detection of banknotes forensics and printed circuit board (PCB) inspection.

One such application, developed by Industrial Vision Systems (IVS; Didcot, Oxfordshire, UK; www.industrialvision.co.uk) has been designed to inspect PCBs using UV fluorescence (Figure 5). Because of the property of the UV traces added to the conformal coating used, IVS developed custom lighting to illuminate both sides of the PCB and captured images with two cameras mounted above and below (see "Machine vision inspects protective PCB coatings," http://bit.ly/VSD-IVS).

As Rihards Fuksis and his colleagues point out in their paper "Infrared Imaging System for Analysis of Blood Vessel Structure"; (http://bit.ly/VSD-IR-VEINS), choosing the correct IR wavelength is important. In developing commercial products based on reflected IR imaging techniques, Evena Medical (Roseville, CA, USA; http://evenamed.com), for example, contracted ProPhotonix (Salem, NH, USA; www.prophotonix.com) to build a number of chip-on-board near IR LEDs to identify the best wavelength for their application (http://bit.ly/VSD-NIR).

Such NIR wavelengths in the 700 -1000nm spectral band can also be used in fluorescence imaging to view deep tissue after NIR fluorophores are introduced since the NIR light can penetrate several centimeters into tissue. Such techniques are used, for example by the Biospace Lab (Nesles la Vallée, France; www.biospacelab.com) in its PhotonIMAGER system to study live animal tissue structures. In its design, the PhotonIMAGER incorporates an intensified CCD camera to increase the sensitivity of the captured fluorescence images, highlighting the need to properly match the correct illumination with the correct camera.

Choosing the correct camera to capture images of reflected or fluorescent light is as important as the wavelength of light used to illuminate the part. As an example of this, the quantum efficiency of the Elite-5 Mono camera from Micropix (Midhurst, West Sussex, UK; www.micropix.co.uk), that employs an IMX250 2/3-in CMOS imager from Sony (Tokyo, Japan; www.sony-semicon.co.jp/products), has a spectral response from approximately 300-1000nm (http://bit.ly/VSD-MPIX). Although cameras based on such sensors may be useful in some UV fluorescence, visible and IR applications, their lack of high sensitivity in UVC, UVB, MWIR and LWIR demands that more specialized cameras must be used (see "Spectral Response of Silicon Image Sensors"; http://bit.ly/VSD-SPECRES).

LED Resources on the Web

Advanced illuminaUV LEDs ramp up the quiet side of the LED market
http://bit.ly/VSD-UV-LEDS

The Growing Viability of UV LED for Automotive and Transportation Applications
http://bit.ly/VSD-UV-LEDS-2

Technologies for Engineering an LED Light Closest to Sunlight
http://bit.ly/VSD-LEDPRO

LEDinside Expects LED Suppliers to Accelerate Their Expansion into Niche Markets in 2017
http://bit.ly/VSD-LED-IND-2

Why image with near-infrared wavelengths?
http://bit.ly/VSD-NIR-WAVE