A research group at Lund University has developed a camera that can film at a rate equivalent to five trillion images per second (frames per second or fps), or events as short as 0.2 trillionths of a second-faster than has been previously possible. 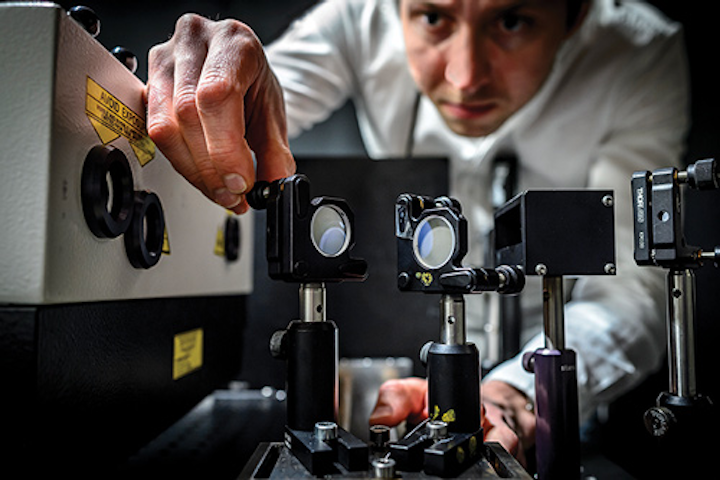 A research group at Lund University (Lund, Sweden) has developed a camera that can film at a rate equivalent to five trillion images per second (frames per second or fps), or events as short as 0.2 trillionths of a second-faster than has been previously possible. The new super-fast film camera can then capture incredibly rapid processes in chemistry, physics, biology and biomedicine, that so far have not been caught on film.

Called FRAME (Frequency Recognition Algorithm for Multiplex Exposures), the FRAME camera operates differently than a standard camera. A regular camera with a flash uses regular light, but in this case the researchers use "coded" light flashes, as a form of encryption. Every time a coded light flash hits the object-for example, a chemical reaction in a burning flame-the object emits an image signal (response) with the exact same coding. The following light flashes all have different codes, and the image signals are captured in one single photograph. These coded image signals are subsequently separated using an encryption key on the computer.

A German company has already developed a prototype of the technology, which means that within an estimated two years, more people will be able to use it.

To illustrate the technology, the researchers have successfully filmed how light-a collection of photons-travels a distance corresponding to the thickness of a paper. In reality, it only takes a picosecond, but on film the process has been slowed down by a trillion times.

Currently, high-speed cameras capture images one by one in a sequence. The new technology is based on an innovative algorithm, and instead captures several coded images in one picture. It then sorts them into a video sequence afterwards.

The film camera is initially intended to be used by researchers who literally want to gain better insight into many of the extremely rapid processes that occur in nature. Many take place on a picosecond and femtosecond scale. "This does not apply to all processes in nature, but quite a few, for example, explosions, plasma flashes, turbulent combustion, brain activity in animals and chemical reactions. We are now able to film such extremely short processes," says Elias Kristensson.

Most days, Elias Kristensson and Andreas Ehn conduct research on combustion-an area which is known to be difficult and complicated to study. The ultimate purpose of this basic research is to make next-generation car engines, gas turbines and boilers cleaner and more fuel-efficient. Combustion is controlled by a number of ultrafast processes at the molecular level, which can now be captured on film.