Researchers from Columbia University have developed a prototype camera system based on an array of commercially available photodiodes to perform both image capture and power generation. 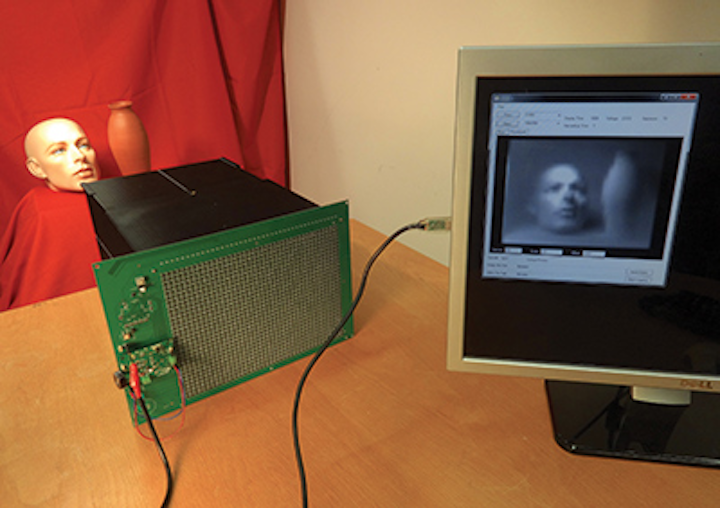 One of the major challenges faced by developers of camera systems is to reduce their size, weight and power (SWaP). This is especially important in military systems, for example, where drone payloads must be kept to a minimum.

While the size and weight of today's CCD and CMOS-based imaging sensors is small, camera systems developed using them still require an external power supply. To eliminate this external power requirement, Professor Shree Nayar, director of the Computer Vision Laboratory at Columbia University (New York, NY, USA; www.columbia.edu) and his colleagues Daniel Sims and Mikhail Fridberg, have developed a camera powered by the incident light falling on a photodiode array.

"Many different ways can be used to design self-powered cameras," says Nayar. "These include the use of solar panels situated close to the camera or alternatively using a portion of the image pixel architecture for power generation." While the former approach is expensive and bulky, the latter requires sacrificing real estate on the sensor.

Rather than take either of these approaches, Nayar and his team have developed a prototype camera system based on an array of commercially available photodiodes to perform both image capture and power generation. The sensor used in the camera employs 1,200 BPW34 photodiodes from Vishay Semiconductors (Selb, Germany; www.vishay.com) arranged in a 30 x 40 array.

To form an image on the pixel array, a single 32-685 Fresnel lens from Edmund Optics (Barrington, NJ, USA; www.edmundoptics.com) with a focal length of 254mm and a clear aperture of 127mm is used.

Instead of using a battery to power the camera, the system uses a 0.5F super capacitor that is initially charged to initiate the camera and then recharged using energy harvested from the pixels.

To capture an image, an STM32L151Z DTT6 microcontroller from ST Microelectronics (Geneva, Switzerland; www.st.com) applies a pulse to the discharge and reset pins to reset the pixels after which the photodiodes capture the incoming light for a specific period of time. After a voltage select signal is then applied to each column, the voltage value is read out and converted to digital signals by an array of analog to digital converters (ADCs) associated with each row.

After the entire array has been read, signals are applied to the discharge and harvest pins allowing current to flow through a BQ25504 harvesting power supply from Texas Instruments (Dallas, TX, USA; www.ti.com). Energy harvested from the pixels includes that accumulated during integration and that generated during the harvesting period.

Experiments conducted by Nayar and his team at Columbia University have shown that when the voltage across the super capacitor is above 2.5V, the camera is capable of automatically capturing 30 x 40 images. In this mode, the camera can capture a series of 30 x 40 images at a rate of one frame per second.

"Due to energy harvesting," says Nayar, "the super capacitor voltage increases and decreases with scene brightness and, at a steady brightness of 300 lux, the voltage stabilizes at approximately 3V - well above the minimum 2.5V needed for the camera to function."

As yet, the self-powered camera architecture remains a prototype based on of-the-shelf components. However, Nayar sees the possibility of building self-powered CMOS imagers based on the design. Indeed, in his paper "Towards Self-Powered Cameras" (http://bit.ly/1bSfeAE), he estimates that if an image sensor such as the OV2740 from OmniVision (Santa Clara, CA, USA; www.ovt.com), for example, exhibited both sensing and harvesting capabilities, it would be capable of capturing 210 x 200 pixel images per second for a 300 lux scene brightness.