NASA’s Spitzer Space Telescope used its infrared array camera to capture images of the Comet ISON’s carbon dioxide emissions when the comet was about 312 million miles away from the sun. 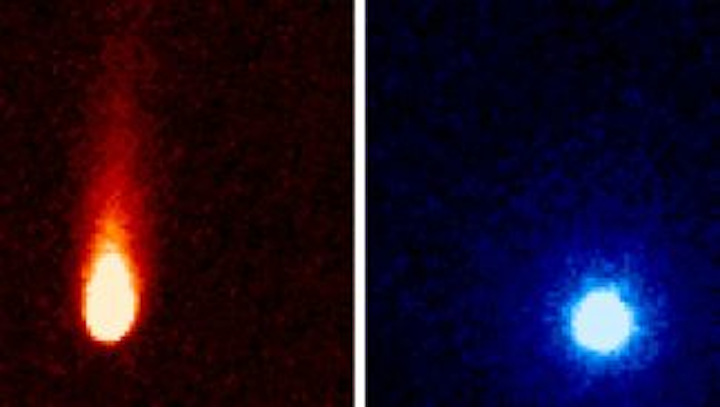 With its infrared array camera, NASA’s Spitzer Space Telescope captured images of the Comet ISON’s carbon dioxide emissions ahead of its anticipated pass through the inner solar system later this year.

Spitzer’s infrared array camera (IRAC) is one of three focal plane instruments on the telescope. It is designed to detect light and near and mid-infrared wavelengths between 0.6 and 8.0 µm. Unlike a normal camera, says NASA’s Jet Propulsion Laboratory, IRAC has four detectors that each measure light at one particular wavelength. It provides simultaneous 5.2' × 5.2' images at 3.6, 4.5, 5.8, and 8µm. The instrument observes two fields of view simultaneously and all four detector arrays in the camera are 256 x 256 pixels in size, with a pixel size of ~ 1.2" x 1.2".

Comet ISON was about 312 million miles from the sun, 3.35 times farther than Earth, when the observations were made, according to NASA. The comet is believed to be on its first passage from the distant Oort Cloud, a spherical collection of comets and comet-like structures about between one-tenth and 1 light-year away from the sun. It will pass within 724,000 miles of the sun on November 28 of 2013. At the time the images of the comet were captured, ISOn was about 312 million miles (502 million kilometers) from the sun.

Check out a space model of the Comet ISON from Inove.