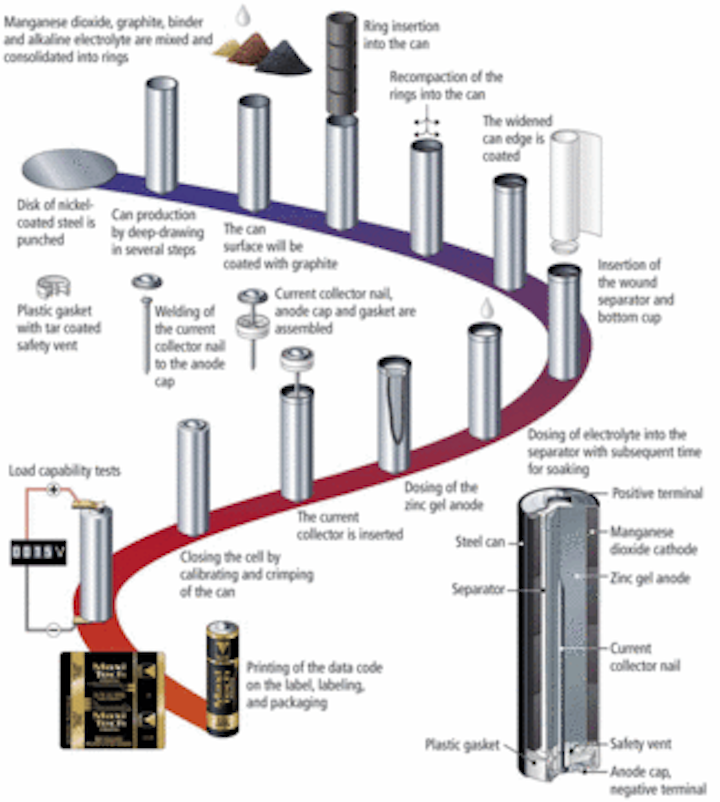 The Varta Consumer Batteries plant produces all types of dry batteries—assembling, fitting, and filling them according to the production requirements of its parent company, Spectrum Brands. Every step of the manufacturing process occurs in this plant, including the labeling and packaging of the finished product. Every day approximately 3 million cells move through rotary transfer systems, conveyor lines, test equipment, and packaging machines to their final destination at the dispatch bay (see Fig. 1).

The performance of Varta’s latest generation of batteries is the result of a specially formulated electrolyte that is injected into the battery casing. The filling takes only a few hundredths of a second. In the past, this production step caused two problems. First, spilling of the electrolyte resulted in the system being contaminated, and the increased downtime needed for system maintenance lowered production rates. This contamination also had a negative impact on the external composition of the batteries. Second, problems with the electrolyte-filling process resulted in fluctuations in the performance of individual batteries.

At process cycle rates up to 600 batteries per minute, it is impossible for Varta staff to identify the cause of faults during production. For this reason, Varta purchased a MotionBLITZ Cube2 camera from Mikrotron. The MotionBLITZ Cube2 camera uses a Gigabit Ethernet interface that enables the camera to be operated from any laptop. At its maximum 1280 × 1024-pixel resolution, a recording speed up to 500 frames/s is possible. Even faster frame rates up to 45,000 frames/s can be achieved by adjusting the region of interest of the camera.

In record mode, captured images are continuously recorded over the previously captured images in the internal ring buffer of the camera until the recording is stopped by a trigger signal. A freely definable number of images captured before and after the trigger event are then saved in the ring-buffer memory. This provides a maximum recording time of up to 6 s at maximum speed and resolution. The built-in ImageBLITZ autotrigger allows an adjustable sensor window within the area of exposure to function as a light sensor barrier that can be used as a trigger mechanism to replace external triggering devices.

Previously, the investigation of running production lines was unsatisfactory because the process speed had to be reduced significantly. Then, the machines usually ran without any problems, since the faults only occurred while running at full capacity. Using the high-speed camera, Varta can determine where problems arise even while the systems are running at their maximum production rates. After making a few high-speed recordings, Varta adjusted the electrolyte-filling jets so that the filling process ran without contaminating other parts of the system (see Fig. 2).

The Cube2 also enabled improvements to be made in the battery-labeling process. Fitting battery cells with wraparound labels has to be performed quickly and precisely at rates of 900–1000 parts per minute. Each label must be applied to the rotating cell at the same speed, because any slippage in the transport of the labels or insufficient adhesion to the cell leads to problems with the next cell. Improperly labeled batteries result in unnecessary rejects and material loss. Any jams in the labelling process must be rectified, causing machine downtime.

As it is necessary to record this process from the side of the machine, the label contour is only perceived as a very thin line. Nevertheless, even under these circumstances the process can be analyzed and any mechanical faults rectified, optimizing the production process (see Fig. 3).

Another example of improvement following system implementation is the setup and configuration of a continuous measurement inspection point using the Cube2. A laser measuring system for quality control purposes could be precisely mounted for the first time, because slow-motion video revealed the exact point at which the measurement was to be made on the batteries and at which point the most accurate measurement could be obtained with the system running at full capacity.

The camera’s integrated time-stamp function, which is applied to each frame, proved to be advantageous for this task. It enables processes to be calibrated so that even small delays in process control can be recognized, and processes can be precisely harmonized with one another. The additional integration of control signals in the recording process provides information for the optimization of the process, as multiple process steps must often be coordinated with each other on a single machine.