Shortly after reading FRAMOS’ sixth annual “Industrial Cameras and their Technical Features” camera survey, I was curious as to what our readers saw as the machine vision interface of choice. 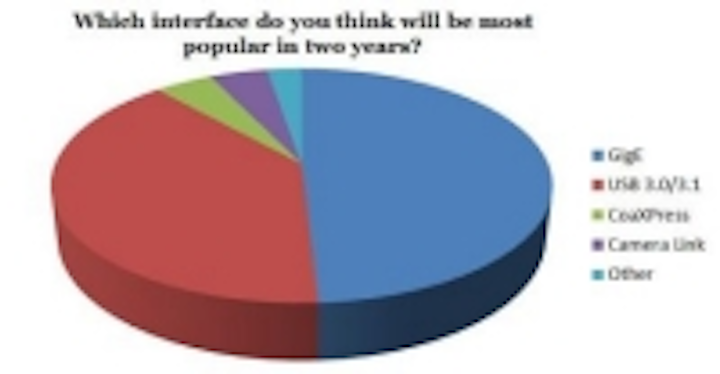 As it turns out, they did. In a poll of 112 machine vision users, 55 (49%) identified GigE as the interface that will be the most popular in two years. Also, as was the case in the FRAMOS survey, 44 readers (39%) identified USB 3.0 (And USB 3.1) as the second most popular interface. Tied for third place at 5 votes each were CoaXPress and CameraLink. Neither USB 2.0 nor FireWire received a single vote, while three people indicated “other.” (Wireless was identified as a potential "other" interface that could gain popularity.

All in all, the numbers are not that surprising. While each interface may offer benefits for certain applications, it seems clear that most people believe GigE and USB 3.0 cameras are the two main interfaces moving forward.

One interesting thing to consider is our omission of 10GigE as an interface. In a recent interview with John Ilett, President of Emergent Vision Technologies, Inc. Ilett notes that GigE Vision is arguably the most dominant interface in the industry (echoed by both this survey and the FRAMOS survey), so the next logical step for higher bandwidth and frame rate would be 10GigE, which achieves 10X the throughput while still maintaining the key benefits of GigE. Just something to consider. Perhaps the next time we take this survey, we could be asking about a different list of interfaces.