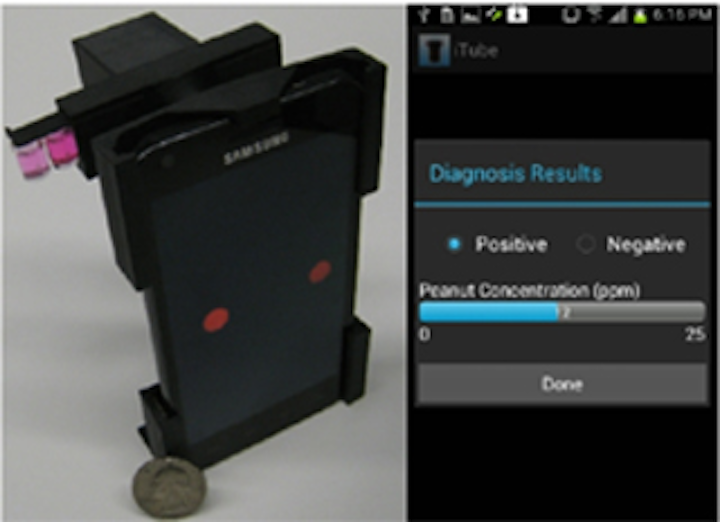 The iTube attachment uses the cell phone's built-in camera, along with an accompanying smart-phone application that runs a test with the same high level of sensitivity a laboratory would.

Food allergies are an emerging public concern, affecting as many as eight percent of young children and two percent of adults. While consumer-protection laws regulate the labeling of ingredients in pre-packaged foods, cross-contaminations can still occur during processing, manufacturing and transportation.

Although several products that detect allergens in foods are currently available, they are complex and require bulky equipment, making them ill-suited for use in public settings, according to the UCLA researchers.

The iTube was developed to address these issues, says Aydogan Ozcan, leader of the research team and a UCLA associate professor of electrical engineering and bioengineering. Weighing less than two ounces, the attachment analyzes a test tube–based allergen-concentration test known as a colorimetric assay.

To test for allergens, food samples are initially ground up and mixed in a test tube with hot water and an extraction solvent; this mixture is allowed to set for several minutes. Then, following a step-by-step procedure, the prepared sample is mixed with a series of other reactive testing liquids. The entire preparation takes roughly 20 minutes. When the sample is ready, it is measured optically for allergen concentration through the iTube platform, using the cell phone's camera and a smart application running on the phone.

The kit digitally converts raw images from the cell-phone camera into concentration measurements detected in the food samples. Aside from providing a "yes" or "no" answer as to whether allergens are present, the test can also quantify how much of an allergen is in a sample, in parts per million.

The iTube platform can test for a variety of allergens, including peanuts, almonds, eggs, gluten and hazelnuts, Ozcan says.

An interdisciplinary research team at Worcester Polytechnic Institute (WPI; Worcester, MA) has received a $1.2 million award from the National Science Foundation to develop a smart phone application ("app") that will help people with advanced diabetes and foot ulcers better manage their disease.

A researcher at the University of British Columbia (Vancouver, Canada) is working on a project to reduce the cost of pulse oximeters by using the integrated camera of a mobile phone as sensor. The novel approach could be used for diagnosis of sepsis and pneumonia in remote locations.

4. Turning a camera phone into a microscope

Researchers at the VTT Technical Research Centre in Finland have developed an optical accessory that can turn an ordinary camera phone into a microscope.