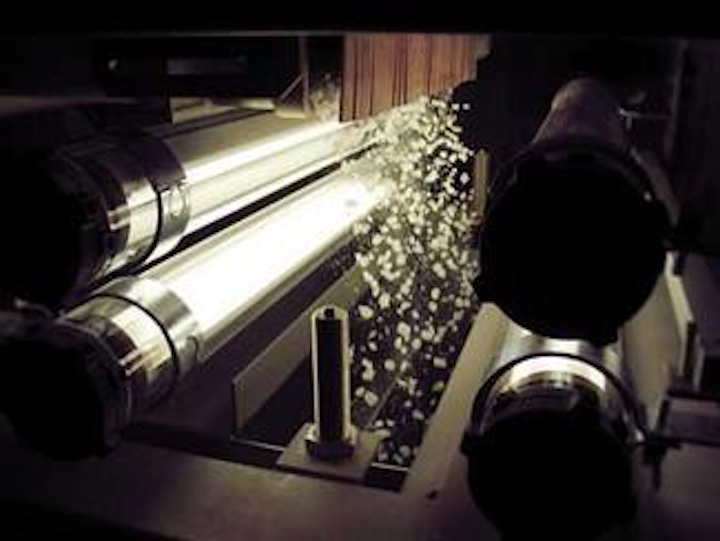 RHEWUM has built screening machines and vibrating feeders since the 1950s. To keep its customers ahead of the productivity curve, RHEWUM decided it needed to incorporate an automated sorting system to its screening systems—in particular, using machine vision to sort rocks and other contaminants from salt as it falls from a chute to a collection bin.

Hitting a stationary target is relatively easy; however, directing an air jet to hit a falling stone as it cascades along with a sheet of salt crystals from a chute to a bin is not an easy task. RHEWUM turned to industrial electronics and food sorting specialist dataschalt Group to build a system capable of detecting falling contaminants in real time and interfacing with RHEWUM’s OEM screening equipment to blow the contaminants out of the product stream.

Dataschalt accomplished the task by integrating machine-vision components from Matrox Imaging and Basler Vision Technologies into a system capable of sorting salt crystals in real time at a rate of up to 120 tons per hour.

Until recently, microprocessors and other computational elements were not powerful enough to sort contaminants from hundreds of salt crystals falling through space. To use air to blow falling contaminants from cascading salt crystals, the vision system needed to be able to classify each crystal based on size, shape, and location, and then provide a bank of air jets with the specific location of the contaminant as it is falling from feeder chute to collection chute. A PMC I/O card inside the PC host then triggers the appropriate air jets, which blow the contaminant into a defect bin.

“Because we are sorting products when they are falling we need to reduce the time between object scan and object rejection,” explains Kai Schwarz, automation engineer at dataschalt. “This is necessary because the behavior of a single falling object within the product stream is actually nondeterministic, but if the time between scan and shot is small we can assume that the object has moved linearly and will be able to hit it with the air blast. The air blast will always hit ‘good’ product as well but this is accepted. This would be easier with a conveyor belt but you wouldn’t be able to sort the same amount of product. So we were looking for a very fast real-time [image-processing] platform with the capability to process blobs.”

Schwarz says that a sorting machine already existed that processes pixel by pixel completely in hardware with a processing time faster than 4 ms, but this platform was not able to process blobs and therefore had limitations. dataschalt evaluated the Tsunami embedded computing board from SBS Technologies (now GE Fanuc), but the Odyssey Xpro+ platform from Matrox had the advantage that it comes with the Matrox Imaging Library (MIL), which solved nearly all of the image algorithm problems and enabled dataschalt to concentrate on the process itself.

“The Odyssey provides the possibility to program the PowerPC on the card itself,” adds Schwarz. “So we had a really fast processor with real-time capabilities that gets the image information directly [from the camera] via the [board’s] internal bus.” The board had a limited number of I/O channels to control the valve battery and so Matrox developed a solution by using their carrier board and a third-party PCM I/O with 64 I/O channels. Schwarz says, “These channels were enough for our valve control hardware—our DataSort Sorting Application (DSA), which consist of a transmitter unit, a receiver unit, and an optical fiber connection. The valve triggers are now written from the Xpro + via the PCI-X bus to the PMC-IO-Card and we have no bandwidth problem.”

During the salt sorting application, crystals are poured into a feeder bin and a vibrating conveyor channel separates the salt into a thin layer of crystals 2 m wide. The crystals then accelerate down a chute and freefall across a short gap before landing on a collecting chute, which funnels the good product into a collection bin.

Mounted on either side of the salt crystals are banks of white LED lights to illuminate the crystals as they fall. On one side of the crystal cascade is a bank of air valves that can be turned on and off independently by the PC based on information from the MIL software running on the Xpro+ image-processing board.

To begin the sort, the operator sets a calibration bar within the Basler Vision L103KM-2K Camera Link linescan camera. This allows the MIL software to correct for changes in illumination across the 2-m-wide chute. dataschalt chose the L103 because of its relatively high pixel resolution and fast acquisition speeds. The clock runs at 18.7 kHz, compared to 9 kHz for the L101 camera, which is important when trying to image falling product in real time and with high spatial resolution from a linescan camera. The camera clock and frame data passed to the MIL software also act as the synchronization signal for triggering the air jets to blow out contaminants from the salt crystal stream.

As salt crystals begin to fall in front of the camera, each line along with its time stamp is passed to the MIL software. The Xpro+ board features an ASIC to accelerate certain image-processing algorithm convolutions running on the nearby G4 Power-PC processor; a FPGA handles filtering, normalization, and similar repetitive tasks based on the specific inspection routine.

The board collects line images in local buffer memory, checking each pixel for intensity variations that indicate the pixel is either a background pixel, salt pixel, or—if darker—indicative of a stone or contaminant. Once contaminant-level pixels are identified, the MIL software runs a blob analysis to determine whether the contaminant is large enough to warrant rejection by the air jets.

“The stones are darker than the salt,” explains dataschalt’s Schwarz. “Often they are included within the salt pieces. So we examine a blob and count the amount of dark or ‘bad’ classified pixels. The user defines beforehand the percentage of bad pixels that are allowed per piece.” The salt pieces are sometimes large (approximately 10 × 10 cm), so often it is not enough to shoot only the bad pixels [from an embedded stone] but it is essential to recognize the complete piece and turn on enough valves to reject it. Furthermore, it is possible to sort the pieces by size.

Once the MIL software determines that a contaminant has exceeded the allowable size, the horizontal location information and time stamps for the defect are passed across the compact PCI bus inside the host PC, through the carrier board to the Acromag PMC464 I/O board. Using its 64 I/O channels, the PMC card then sends that location information to the dataschalt DSA electronic control system, which fires specific valves in the bank of 255 air jets that stretch across the sort stream. The jets blow the defective crystal or contaminant out of the stream and into a defect bin.

Adding color to the mix

While the salt-sorting application only required monochrome images to differentiate white salt crystals from darker stones, many food-processing applications require more data to pick good product from bad. For these applications, dataschalt uses the same processing hardware with a color camera. To accommodate the additional data while maintaining high-speed processing, Schwarz says he uses principle component analysis (PCA) techniques to remove one dimension in the RGB color space that holds the least amount of data, essentially compressing the 3-D color space into 2-D.

The throughput of the DataSort depends on particle size, the material’s bulk density, and the width of the machine. Currently, the sorting capacity can be up to 120 t/h at a machine width of 1200 mm.

“We are very happy with the fast-working, high-tech solution we have received from dataschalt,” says Sigurd Schuetz, managing director of RHEWUM. “It enables us to provide a reliable and cost-efficient sorting technology to our customers, who greatly benefit from this combination of dataschalt and RHEWUM technological knowledge.”