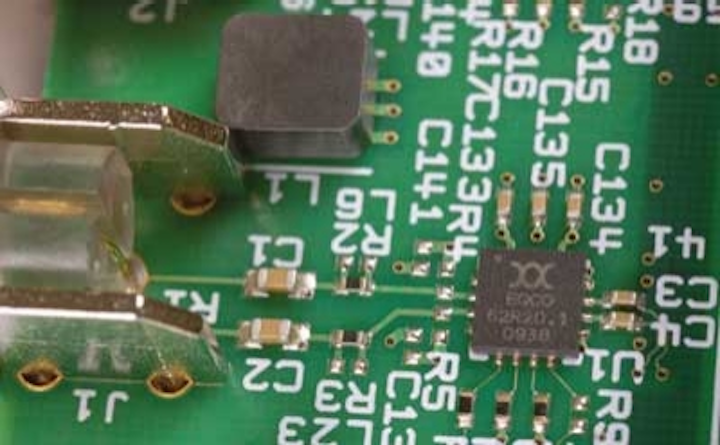 Over the last decade, a number of different interfaces have been used to connect machine-vision cameras to host PCs. While many of these leverage low-cost computer-oriented serial interfaces such as USB and FireWire, others use high-speed broadcast standards such as HD-SDI in their designs.

For high-performance machine-vision applications, high-speed deterministic interfaces such as Camera Link were introduced to increase system bandwidth to 850 Mbytes/s and reduce latency problems. Distance limitations of these interfaces were overcome with the development of the GigE Vision standard, allowing cameras and computers to be linked at up to 100 m and speeds of 1 Gbit/s.

Because each of these standards has its own advantages and disadvantages, many camera manufacturers offer a number of interfaces in their range of products. Allowing the system developer to choose from a number of these interfaces ensures that the specific bandwidth, scalability, distance, and trigger capabilities of each individual application can be successfully met.

Even as early as 2009, deciding which standard would best meet a specific application was fairly straightforward. Now a number of emerging standards based on existing point-to-point interfaces, serial bus interfaces, and networking protocols necessitate re-evaluating camera-to-computer interface standards.

Although both standards offer a path for system developers to increase the bandwidth of high-speed, point-to-point camera-to-computer interfaces, CoaXPress and HSLINK differ in their designs. Using a line driver and equalizer chipset from EqcoLogic, CoaXPress achieves a camera-to-computer downlink speed up to 6.25 Gbits/s per cable for images and data, and a lower-speed, 20-Mbits/s uplink for communications and control over a single coaxial cable. In CoaXPress, power is also available over the cable (power-over-coax) and cable lengths of approximately 100 m may be achieved.

At present, Active Silicon is the only company to offer a frame grabber for the CoaXPress standard, although AVAL Data is expected to introduce a PCI Express interface later this year. To interface to currently available CoaXPress cameras from Adimec, Active Silicon has developed a mezzanine interface board for its Phoenix frame grabber that incorporates the EqcoLogic EQCO62R20 to transmit the uplink signal and receive the downlink signal (see Fig. 1).

Rather than take this approach, DALSA has designed its HSLINK interface to leverage the camera control signals of the existing Camera Link standard, offering a scalable interface from 300 Mbytes/s to 6 Gbytes/s. For low-bandwidth applications less than 300 Mbytes/s, InfiniBand or coaxial cabling can be used. According to DALSA, by using coax in such low-bandwidth applications, 80-m camera-to-computer distances can be achieved. For applications up to 2.1 Gbytes/s, a single CX4 cable is used to allow 15-m transmission distances, and like CoaxPress, power over HSLINK is also possible.

At VISION 2009, DALSA demonstrated both a linescan camera and a frame grabber based on the HSLINK interface. As the first camera to support HSLINK, the Piranha HS 12k features a TDI imager with 12k × 256-pixel resolution operating at 90 kHz or 1.2 Gpixels/s. The Piranha HS 12k is supported by DALSA’s Xcelera-HS PX 8 frame grabber that incorporates the HSLINK interface to allow for data acquisition rates as high as 1.8 Gbytes/s (see Fig. 2).

This year, specifications for CoaXPress will be given to the Japanese Industrial Imaging Association to publish as an open standard, and the CoaXPress consortium anticipates that EMVA and AIA will act as contact points for European and North American adopters of the interface. For its part, DALSA is working with the Camera Link 2 subcommittee of AIA to make reference designs and a complete specification of the HSLINK standard available.

While Camera Link, CoaXPress, and HSLINK will fill the need for deterministic camera-to-computer interfaces, faster serial bus-based protocols such as S3200 1394b and USB 3.0 (a.k.a. SuperSpeed USB 3.0) are also emerging to accommodate high-speed CCD and CCD cameras. These faster interfaces will provide system developers with an easy means to upgrade legacy FireWire and USB standards.

Even before the interfaces become readily available, camera and interface manufacturers are finding novel ways to accommodate high-speed cameras using established serial interfaces. In January 2009, for example, Point Grey Research announced an IEEE-1394b dual-bus frame grabber and a series of Grasshopper cameras that allows data transfer rates up to 160 Mbytes/s. To date, the company has announced three variations of the Grasshopper2 series that support 1024 × 1024-, 1600 × 1200-, and 1920 × 1080-pixel progressive-scan interline transfer CCDs from Kodak to operate at date rates of 120, 68, and 64 frames/s, respectively (see “Extendable Standards,” Vision Systems Design, January 2009).

Though these products may be a novel way for camera and interface developers to overcome the bandwidth limitations of existing serial bus interfaces, it is likely that they will be superseded by high-speed interfaces in the very near future. Indeed, at VISION 2009, DapTechnology demonstrated an S3200 3.2-Gbit/s, IEEE 1394b FireWire PHY embedded in a Xilinx FPGA-based development board transferring video data over a 10-m FireWire cable to a PCI Express board.

According to DapTechnology, the 3.2-Gbit/s IEEE 1394b SoC Solution suite will include a 3.2-Gbit compliant IEEE 1394b PHY IP, FireLink extended link layer controller IP core, a 3.2-Gbit peripheral development board, and a four-lane PCI Express host adapter. An S1600 1.6-Gbit version is expected by the end of April 2010.

Just as such IP will propel the resurgence of FireWire, similar developments will increase the data bandwidth of USB peripherals. In September 2009, for example, Fresco Logic became one of the first fabless semiconductor vendors to offer a single-chip PCI Express-to-USB 3.0 host controller.

Integrating a 4.8-Gbit/s USB 3.0 transceiver, a USB 3.0 xHCI controller, and a PCI Express controller and transceiver, the device has been used in a camera/computer system jointly developed by Fresco Logic and Point Grey Research to stream uncompressed 1080p60 video from a Point Grey camera to the USB 3.0 host controller running in a P7P55D motherboard from Asus (see “Intel developer forum focuses on interface standards,” Vision Systems Design, November 2009). According to Point Grey, first versions of the USB 3.0 camera will be available at the end of the third quarter of 2010.

Just as adopters of point-to-point and serial bus interface cameras and interface boards await the next generation of high-speed interface ICs and IP, vendors currently adopting the GigE Vision standard also have plans to upgrade performance.

Although 10-Gbit Ethernet cameras such as the xposure 10G camera from Smart Systems have implemented a fiberoptic interface to overcome the 10-m distance limitation of 1280 × 1024-pixel Camera Link products, the transceiver used in this type of camera remains expensive and somewhat bulky (see “High-res cameras use fiber interfaces,” Vision Systems Design, February 2009). Realizing this, GigE camera vendors are now beginning to adopt dual GigE interfaces as a way to increase the 1-Gbit/s speed limitation of the current standard.

In a concept similar to that used by Point Grey Research in its dual FireWire cameras, Allied Vision Technologies has equipped its latest generation of 1-, 2-, and 8-Mpixel GigE cameras with two GigE ports. Using the IEEE 802.3ad link aggregation, both physical GigE links are combined into a single logical link that allows the cameras to operate at 120, 60, and 15 frames/s, respectively (see “Gigabit Ethernet cameras go on show at VISION,” Vision Systems Design, December 2009).

At the same trade show, SVS-VISTEK endorsed this concept with the introduction of its svs8050, an 8-Mpixel GigE camera that uses two RJ-45 connectors to transmit up to 2 Gbits/s over two cables; with these features, the camera can achieve a maximum 20 frames/s with a resolution of 3320 × 2496 pixels. The link aggregation protocol has yet to be formally integrated into AIA’s GigE Vision standard, but adoption appears likely as more manufacturers are expected to endorse the concept.

In the future, as camera vendors begin to adopt 10-Gbit Ethernet interfaces, the same link aggregation protocol could also be used to incrementally increase the bandwidth of camera-to-computer interfaces.

Based on the SMPTE 292M standard, 1.485-Gbit/s HD-SDI serial data from these cameras can be interfaced to a PC using a number of off-the-shelf frame grabbers from companies such as Active Silicon, dPict Imaging, and Blackmagic Design (see Fig. 4).

Building on this standard, the dual-link HD-SDI consists of a pair of SMPTE 292M links and is standardized in SMPTE 372M. This provides a 2.970-Gbit/s interface and is used in applications such as HDTV 1080p systems that require higher bandwidths. A more recent interface, 3G-SDI, consisting of a single 2.970-Gbit/s serial link, standardized in SMPTE 424M to replace the dual-link HD-SDI standard is now becoming available mainly on broadcast cameras.

Because Active Silicon’s PHX-D20HDSDI, dPict’s Nexeon HD Xtra, and Blackmagic’s DeckLink HD Extreme PCI Express interface boards all support HD-SDI, they can be used with prism-based cameras for machine-vision and image-processing applications. By adding extra support for the 2.970-Gbit/s SMPTE 424M and HDMI standards, both dPict’s and Blackmagic’s interface boards can also be used in high-bandwidth broadcast applications.

Because emerging standards such as CoaXPress, HSLINK, USB 3.0, 3.2-Gbit/s FireWire, and 10-Gbit Ethernet interfaces are still in their infancy, many frame grabber manufacturers are taking a wait-and-see approach before committing engineering resources to any one specific standard. While companies such as BitFlow, EPIX, and Matrox are likely to develop frame grabbers based on some of these standards, customer demand will be the factor that determines which interface standards will dominate in the next few years.