Between 2016 and 2022, the compound annual growth rate (CAGR) of the uncooled infrared camera market is expected to be 8%, reaching almost $4.4 billion at the end of the period, according to a new report from Yole Développement. 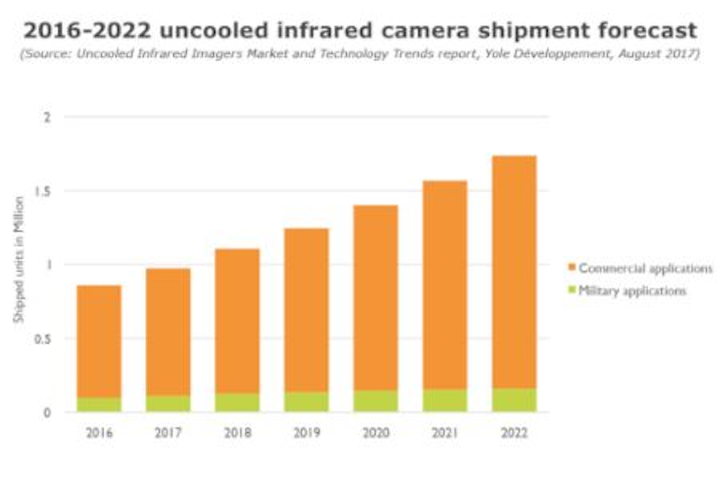 Between 2016 and 2022, the compound annual growth rate (CAGR) of the uncooled infraredcameramarket is expected to be 8%, reaching almost $4.4 billion at the end of the period, according to a new report from Yole Développement.

In 2016, almost 900,000 uncooled infrared cameras worth $2.7 billion were shipped, thanks to a dynamic commercial market and continued growth for military applications. By 2022, according to Yole, we could see up to 1.7 million units shipped, aided by growth in thermography and surveillance applications, among others.

These results and more were presented at the Executive IR Imaging Forum on September 7 in Shenzhen, China, alongside the 19th China International Optoelectronic Expo 2017. At the event, which focuses on the latest technical innovations and market status, industry experts suggested that the future of the infrared imaging market is looking positive.

“The future of uncooled IR imagers is bright," said Yole’s Senior Analyst, Dr. Eric Mounier. "Driven by dynamic commercial applications which continues to expand really quickly, this industry is showing significant emerging applications that could impact the market evolution. We are at the very beginning of new large volume applications."

In 2016, according to the report, FLIR and ULIS accounted for more than 75% of the total market (in volume). Other companies within the industry are benefitting from the infrared imaging market growth, however. These include:

Some of the additional drivers of growth in the infrared imaging market, according to Yole, will include firefighting and law enforcement, traffic, parking, power stations, photovoltaic planning, night vision in cars (including autonomous vehicles), maritime, drones, robots, smart buildings, smart homes, shops, and numerous others.

Other companies mentioned in the report include DRS, Excelitas, Fisba, Jenoptik, Omron, ON Semiconductor, Panasonic, Qioptiq, Raytheon, Samsung, Tamron, and TowerJazz, among others.