The MIPI Alliance—a global organization that develops interface specifications for mobile and mobile-influenced industries—has opened access to its sensor interface specification, MIPI I3C, which enables users to evaluate the incorporation of the specification into their sensor integration plans and design applications, including those in smartphones, wearables, Internet of Things (IoT) devices, augmented reality and virtual reality, and automotive systems. 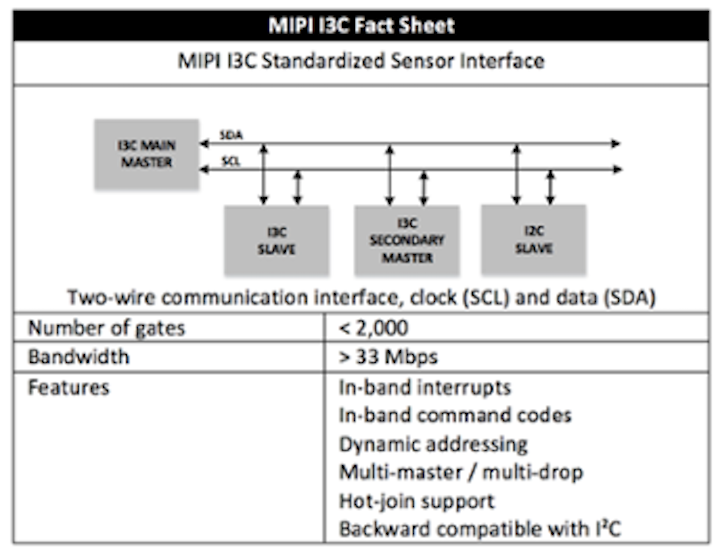 The MIPI Alliance—a global organization that develops interfacespecifications for mobile and mobile-influenced industries—has opened access to itssensor interface specification, MIPI I3C, which enables users to evaluate the incorporation of the specification into their sensor integration plans and design applications, including those in smartphones, wearables, Internet of Things (IoT) devices, augmented reality and virtual reality, and automotive systems.

MIPI I3C v1.0 is a bus interface for connecting sensors to an application processor and is a core sensor integration technology that can combine multiple sensors from different vendors in a device to streamline integration and improve cost efficiencies, according to The MIPI Alliance.

"MIPI I3C provides a welcome update to the I2C technology that has been widely adopted over the past 35 years. Extending access provides an opportunity to spur innovation and help other industries beyond mobile," said Joel Huloux, chairman of MIPI Alliance. "It helps MIPI members as well, because it supports greater adoption and interoperability, strengthens the ecosystem and provides for a richer development environment."

Initially released to the MIPI Alliance member community in January 2017, MIPI I3C streamlines and advances interface technologies that have been previously used in the sensor industry, such as as I2C and SPI. The unified approach, according to the alliance, makes it easier to integrate sensors from various vendors in a device to meet the increasing demand for sensor-enriched smartphones, wearables, Internet of Things (IoT) devices, AR/VR products and automotive systems.

Additionally, the MIPI Alliance is broadening the MIPI I3C ecosystem with new specifications that implement MIPI I3C that will be released in 2018, including MIPI I3C Host Controller Interface (HCI), a forthcoming specification that enables a single software driver to support MIPI I3C hardware from various vendors; MIPI Touch, MIPI Debug for I3C, MIPI DisCo for I3C and MIPI CSI-2v2.1.

"Since its introduction, MIPI I3C has become a springboard for development activities within MIPI Alliance, extending the use cases and further enhancing its value to the developer community," said Ken Foust, chair of the MIPI Alliance Sensor Working Group. "We want to collaborate with developers in industry and academia on potential MIPI I3C applications and believe access to the specification will be a great help in these efforts."