After achieving record sales figures in 2017, Basler is celebrating its 30th anniversary this year. The Ahrensburg, Germany-based machine vision camera company began as a two-man operation in 1988 and has grown into a global leader, achieving annual sales of more than € 150 million. 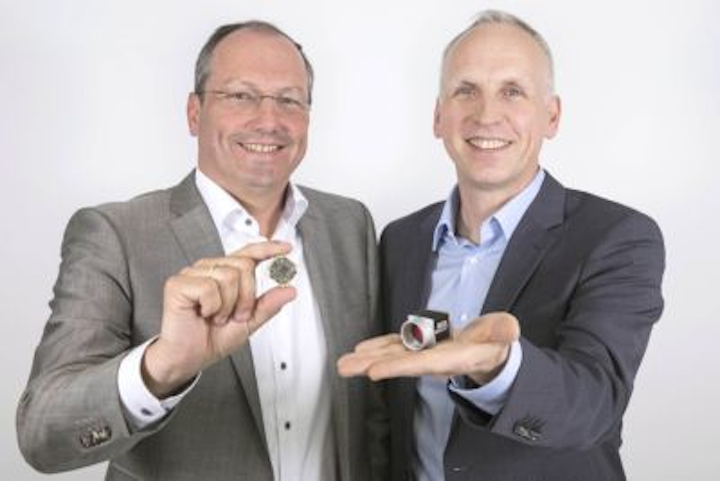 After achieving record sales figures in 2017,Basleris celebrating its 30th anniversary this year. The Ahrensburg, Germany-based machine vision camera company began as a two-man operation in 1988 and has grown into a global leader, achieving annual sales of more than € 150 million.

Basler was founded by Norbert Basler in 1988 with a fellow student and a starting capital of 2,000 D-Mark. At the time, the duo set out to develop an image processing company. Within a few years, the company found success with systems for testing optical data carriers. A decade later, the company began developing its own cameras and marketing them worldwide. One year later, Basler went public, with a new focus on its camera business.

Soon thereafter, Basler strengthened sales in the Far East, and built its own production facility in Singapore. Camera production rose from 24,000 units in 2009 to more than 450,000 units in 2017. Last year, Basler saw its sales figures reach € 150.2 million (approximately $184.3 million USD), a 54% increase over the € 97.5 million from the previous year. The pre-tax result for the company amounted to € 29.8 million, which is 161% more than the previous year’s € 11.4 million. Basler’s 54% growth is more than double that of the German industry for image processing components, which grew by 24% for the year, according to the VDMA.

For the fiscal year 2017, Basler hired 68 new employees and in 2018, plans to hire more than 100 new employees mainly at the Ahrensburg location, but also in Asia, in an effort to lay the foundation for further growth in upcoming years. For fiscal year 2018, Basler expects a slight one-digit market growth and sales revenues within a range of € 145 – 160 million.

Contributing to the company’s success over the past few years are the continued production and evolution of its ace industrial camera series, as well as development in 3D and embedded vision products and technologies.

"The classic market of factory automation is changing; machine vision is constantly being revolutionized,” said Dietmar Ley, CEO. “The embedded vision trend will gradually replace today's predominantly PC-based image processing and at the same time enable a multitude of new applications. We want to play an active role in this development and open up new market segments. This will lay the foundation for the sustainability of our growth."

He continued: "I am very proud of what we have achieved at Basler on the basis of trusting cooperation and long-term thinking, especially in our record year 2017. We owe this to our courage in taking risks and our willingness to understand constant change as normal - but above all to our more than 600 employees worldwide, their exceptionally strong identification with the company, their creativity and their motivation.”