A team of researchers from the UCLA Henry Samueli School of Engineering and Applied Science (Los Angeles, CA) has developed a lens-less imaging system that has recorded the three-dimensional helical swimming patterns of human sperm cells. 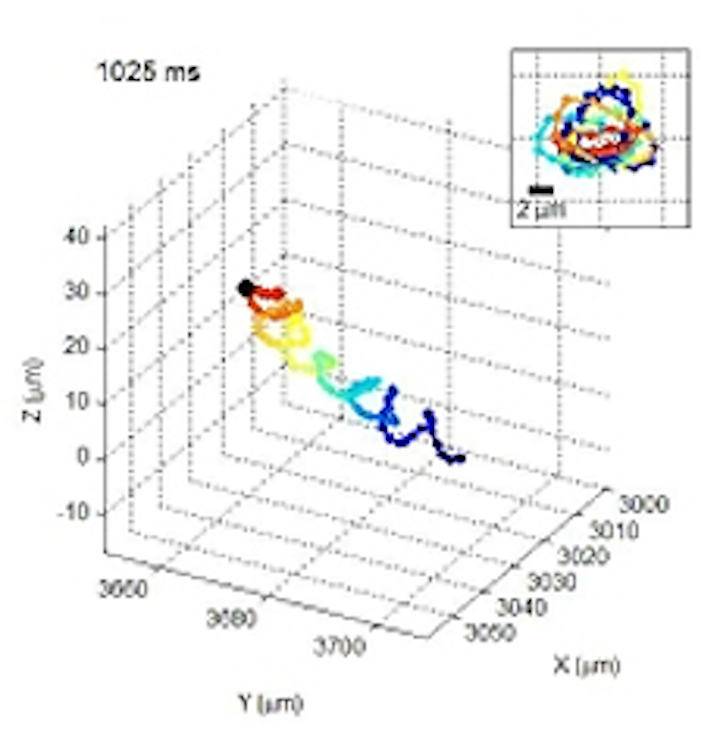 A team of researchers from the UCLA Henry Samueli School of Engineering and Applied Science (Los Angeles, CA) has developed a lens-less imaging system that has recorded the three-dimensional helical swimming patterns of human sperm cells.

The team, led by Aydogan Ozcan, associate professor of electrical engineering and bioengineering, used the system to accurately track more than 24,000 individual sperm cells. This involved observing the individual rotations of each sperm cell, including helical movement patterns, rotation speed, and linear and distances traveled.

Observing human sperm cells has generally been limited to conventional lens-based optical microscopes. But the small size of a sperm head (about 3 to 4 micrometers), requires a high-magnification lens to observe its motion, and sperm cells' relatively fast speed (about 20 to 100 micrometers per second) make it difficult to track them over time as they move in three dimensions, into and out of the microscope's small observation field.

The new imaging system relies on acquiring shadows of sperms that are illuminated by two partially-coherent red and blue LEDs set 45 degrees apart from one another. A CMOS sensor captures the images which are then processed to determine the swimming trajectories of the sperm cells.

Using the system, the researchers tracked the three-dimensional motion of approximately 1,500 individual human sperm cells across a field-of-view of 17 square millimeters.

The team found that about 4 to 5 percent of the sperm cells within the sample moved in a very tight helical, or corkscrew, motion. Such movement patterns had a helix radius of about 0.5 to 3.0 micrometers, a helical rotation speed of three to 20 rotations per second, and a linear speed of 20 to 100 micrometers per second.

Before this research, this helical pattern had not been directly observed in human sperm.

Interestingly, the team also noticed that an overwhelming majority of the helical-moving sperm cells -- about 90 percent -- preferred right-handed helical motions to left-handed ones.

The research has been published online in the peer-reviewed journal Proceedings of the National Academy of Sciences. More information is available here.

Related stories from Vision Systems Design you might also find of interest.

A team of researchers from the University of California-Davis (Davis, CA, USA) has transformed an iPhone into a system that can perform detailed microscopy.

Academics led by Professor Nick Hartell at Leicester University (Leicester, UK) have developed a new type of confocal microscope that promises to enable researchers to record images of cellular specimens at much higher speeds.