In a ceremony held in February 2010, Volker Massmann, Markus Hasenzahl, Klaus Anderle, and Andreas Loew of DFT Digital Film Technology Holding were each honored for the development of the company's Spirit 4K/2K film scanning system as used in the digital intermediate process for motion picture film. 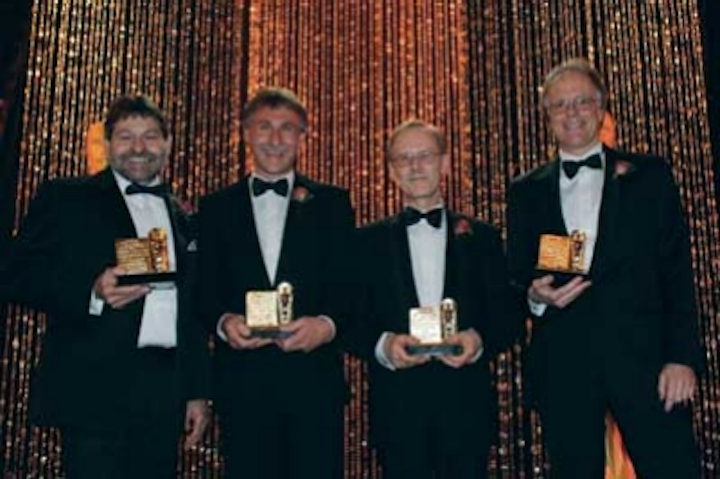 In bestowing its scientific and technical awards, the Academy of Motion Picture Arts and Sciences (AMPAS; Beverly Hills, CA, USA; www.oscars.org) honors those whose discoveries and innovations have contributed in outstanding ways to motion pictures. In a ceremony held in February 2010 at The Beverly Wilshire Hotel, Volker Massmann, Markus Hasenzahl, Klaus Anderle, and Andreas Loew of DFT Digital Film Technology Holding (Weiterstadt, Germany; www.dft-film.com) were each honored for the development of the company's Spirit 4K/2K film scanning system as used in the digital intermediate process for motion picture film (see Fig. 1).

“In the past,” says Massmann, product manager with DFT, “original camera negative (OCN) films were copied to a master positive or inter-positive film.” The intermediate-positive print was used for editing, processing, and scanning for video. This reduced wear and tear as well as cutting of the precious original negative, but it was expensive and time consuming. Moreover, selected scans from the OCN film were required at the highest possible resolution for digital image processing and special effects.

“Today,” continues Massmann, “the advent of high-speed digital film scanners allows the original negative to be scanned only once at high speed and high resolution without adversely affecting the original negative.” This negates the requirement to produce an inter-positive film and allows the film-maker to view his work in a digital format the next day. The film-maker can then start to work on selected takes for the final release without the need for rescans.

In designing the Spirit 4K/2K film scanner, engineers at DFT combined their expertise in lighting, optics, mechanical and electrical engineering, and computer science in a system that allows multiple film formats to be digitized at high resolution and rates as fast as 30 frames/s (see Fig. 2). Eastman Kodak (Rochester, NY, USA; www.kodak.com) designed to DFT's specifications the illumination system and optical components, modeling the design after the predecessor, Spirit DataCine.

“Since all color film negatives contain an orange cast,” says Anderle, optics and colorimetric scientist at DFT, “using a xenon lamp to provide a white light source with a high blue light content helps to compensate for this orange component while maintaining an excellent signal-to-noise ratio.” After light is generated by the xenon source, it is reflected from a cold mirror to remove any infrared component and associated heat generated by the lamp.

Because the scanner was designed to be used with negative, inter-negative, and print film types, the illumination wavelength required differs depending on which type of film needs to be scanned. To adjust the wavelength of transmitted light from the xenon lamp, a filter wheel containing up to four different filters is placed in the optical path of the illuminator. The spectral characteristic and the associated peak wavelength of each filter (B ~ 450 nm, G ~ 540 nm, R ~ 660–690 nm) are chosen to match the spectral density of the dyes of the film. An additional orange filter mask is used to emulate the orange cast of the negative film during calibration of the system.

To accomplish this, a mechanical shutter with a fast aperture is placed into the optical path. A condenser then focuses light from the illumination source onto the entrance of a glass rod, which ensures that all wavelengths of light are homogeneously distributed with a Lambertian light distribution. Light from this glass rod illuminates the film as it travels over a film gate block. Then reflected light travels through a projection lens and a beamsplitter, which splits the light into red, green, and blue (RGB) components.

To capture individual line scans of the film, DFT developed a custom-built CCD imager in conjunction with DALSA (Waterloo, ON, Canada; www.dalsa.com). “Because the scanner was required to digitize film at the highest possible speeds in two different resolutions,” says Hasenzahl, project manager with DFT, “the custom CCD imager consists of both a linear 4k × 1 CCD with 7 × 7-µm pixels abutted to a 2k × 1 CCD with 14 × 14-µm pixels. The scanner can then digitize film either more than real time at 2k resolution or real fast at 4k.”

To scan film in 12-µm resolution at 30 frames/s requires multiple read-out channels at each CCD. The Spirit 4K/2K uses four channels. “The problem with multiple channels is that the linearity of amplifiers might be slightly different. Therefore, a linearity calibration for each CCD channel was implemented using digital processing to avoid any differences between the channels over the total dynamic range,” says Loew, digital processing system architect with DFT.

Digitizing 4k × 1 RGB images using 3124 lines/frame results in a file size of approximately 76 Mbytes/frame, but many of DFT's customers do not require such large 16-bit RGB images. For this purpose, images can be dynamically reformatted as 10-bit logarithmic RGB images that closely match the logarithmic density of film.

These images are then transferred from the Spirit 4K/2K film scanner over an InfiniBand interface via a workstation to RAID-based storage area networks (SANs) or alternatively output as SDTV or HDTV images. To perform such functions as color correction, film grain reduction, and dynamic film resizing in real time, the company offers special processing boards integrated into Spirit 4K/2K as well as a post-production workstation and software, dubbed BONES, that can be used for editing, special image processing, audio syncing, and generation of various output formats in conjunction with image data from the Spirit 4K/2K film scanner.