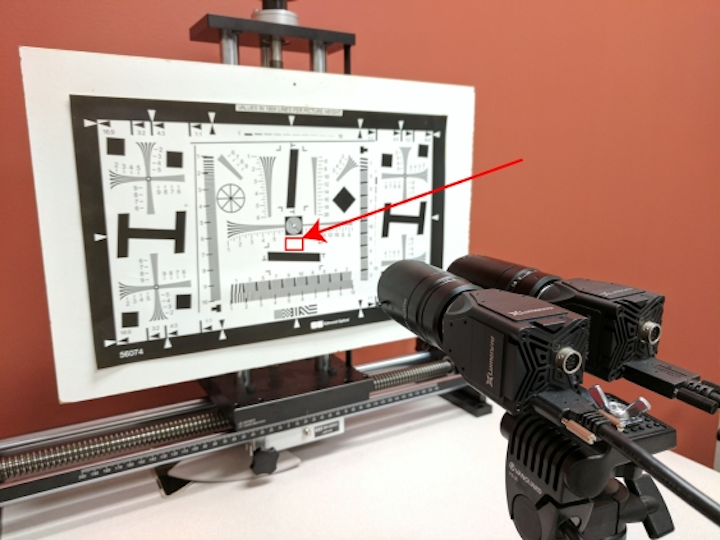 When configuring a camera, there are a number of ways to make the image brighter: increase the exposure time, open the lens’ iris, or increase the camera’s analog gain. Each application usually has limits for each parameter. For instance, increasing the exposure time can make moving objects too blurry to image. Opening the lens’ aperture will reduce the camera’s depth of field (some lenses also do not have the ability to modify their aperture). And, and increasing the analog gain will increase the noise to the image.

In the following experiment we set each identical lens’ aperture to f/16 to create a dark scene for the cameras. We then imaged a resolution target with two different cameras (Lumenera Lt425C and Lumenera Lt965RC) to demonstrate the impact of a camera’s sensitivity on exposure time and gain required to achieve similar results. Because we worked with a darkened scene, we will also be able to observe the impact that gain has on noise. 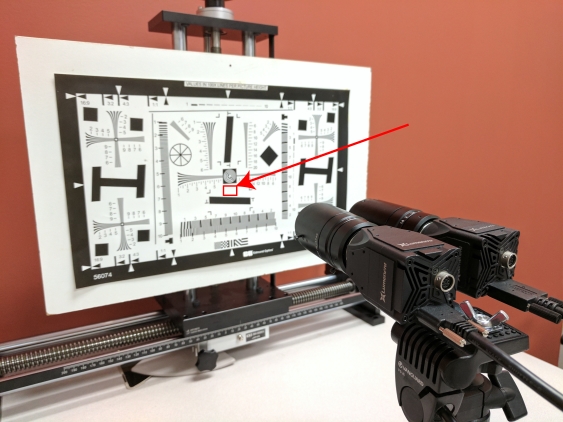 Below is a table comparing both cameras in the relevant areas that were explored.

The Lumenera Lt425C camera has larger pixels and is therefore more sensitive than the Lumenera Lt965RC camera. This means that it requires less light than the Lt965RC to produce an image of similar brightness with the same camera settings.

Below are two cropped images of the resolution target taken with each camera. The target’s white background is highlighted by the red rectangle in the experiment setup image above. They were both captured using an analog gain of 3.2 and an aperture of f/16. The exposure time used for the Lt425C was 23.5 ms and 91 ms for the Lt965RC. A digital gain of 4 was added to both images to help the human eye see the visual data. 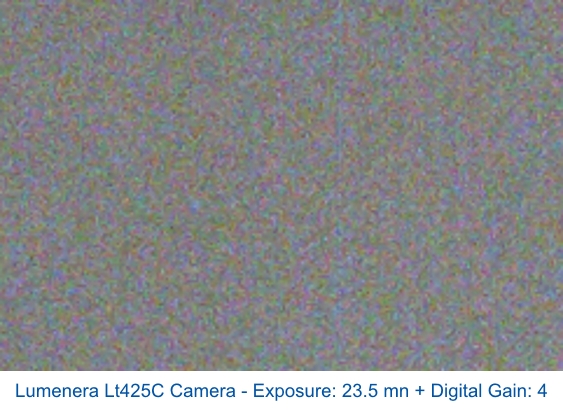 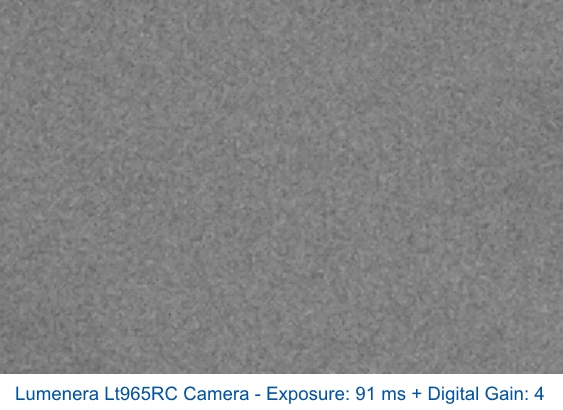 As expected, the Lt425C produce a noisier image in a shorter period of time since it is more sensitive than the Lt965RC and has a higher read noise level.

If a situation arises where the exposure time cannot surpass a certain duration, the camera’s analog gain would need to be increased to create two images of matching responsivity. To illustrate this, the exposure time of the Lt965RC was set to 23.5ms and its gain increased to 9.2 to maintain the same scene brightness level as the first image captured by the Lt425C. The results of these changes can be seen below in the cropped image of the same area seen in the previous images (digital gain of 4 added, once again). 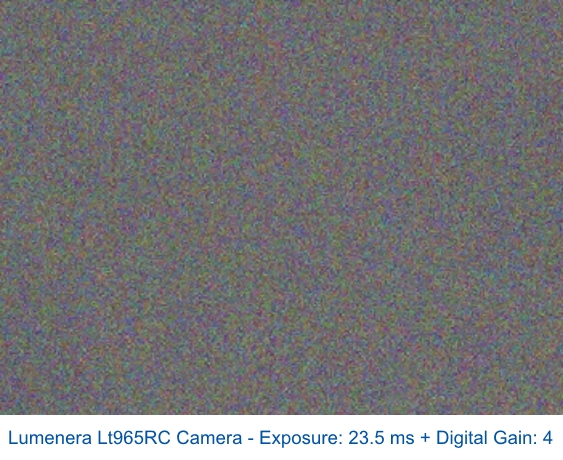 Comparing all three images, it can be seen that when gain is added to an image the noise is also amplified. This is seen numerically by the increase in the range between the minimum and maximum pixel values as well as in the variance of the image.

The results of the experiment show that increasing a camera’s gain will increase the noise in the image. Depending on the application, this may be an acceptable trade-off based on the requirements of the camera’s aperture and shutter speed. The only way to further reduce the noise is to actually select a camera with less noise.

If you have any questions, reach out to our imaging experts at info@lumenera.com.