Understanding Camera Sensitivity – A Look at the Numbers 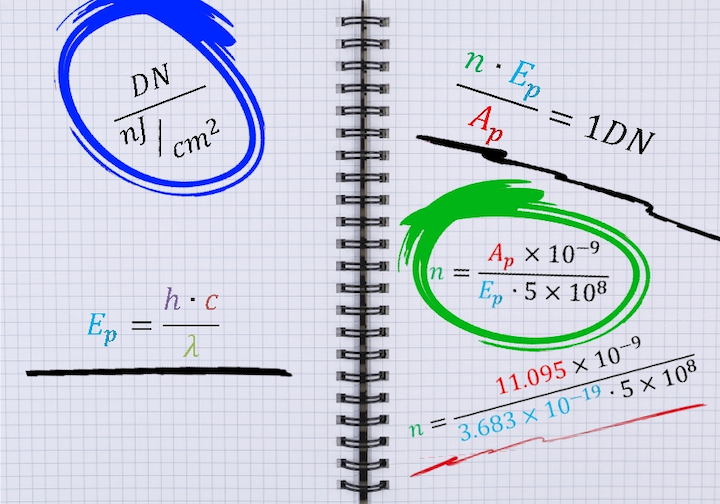 Understanding all the units and terms in a datasheet is not always easy or intuitive, especially if your area of expertise is not in imaging or photonics. This blog post focusses on units of sensitivity and explains why Lumenera illustrates sensitivity in a particular way and how it relates to the EMVA 1288 standard. It also takes an easy-to-follow approach to the math relating both units while explaining some properties of physics along the way. Finally, some parallels will be drawn between quantities of photons and how they relate to real world scenarios.

EMVA 1288 defines a camera’s sensitivity in terms of its absolute sensitivity threshold. This is illustrated by the number of photons required to increase a camera’s pixel value by one. However, this does not take into account the pixel’s size. If for instance two cameras have the same absolute sensitivity threshold, but one has pixels that are twice as large as the other, the camera with larger pixels would require less overall light to increase its signal and would be considered more sensitive. This is why Lumenera illustrates sensitivity in units of digital numbers (DN) over nanojoules per square centimeter:

This unit is a representation of the EMVA 1288 standard that takes into account the pixel’s size to allow for a more accurate camera comparison. In other words, it normalizes the sensitivity measurement by the pixel’s area to compare cameras with different pixel sizes.

How many photons at a wavelength of 540 nm does it take to increase one pixel by 1 DN (at 8 bits) on a monochrome Lumenera Lt545R camera?

We start by calculating the energy of a photon (Ep), given by:

Where h is Plank’s constant, c is the speed of light, and ?is the specified wavelength

From the Data Sheet, we know that the Lumenera Lt545RM’s sensitivity (S) is:

This means that to increase the readout by a single digital number, we require one fifth of a nanojoule per square centimeter:

Switching the energy units to joules and the area to square microns, we have:

The equation we are trying to solve to answer our initial question is:

We can combine equations 6 and 7 as they are both equal to 1DN, to obtain:

The units of both equations cancel each other out, allowing us to easily isolate n:

We can substitute the values for Ep (calculated above) and Ap, the area of a pixel, found in the datasheet (3.45 microns squared: 11.095) to solve for n:

Through this example we can determine that 60 photons with a wavelength of 540 nanometres are required to increase the pixel’s readout by 1.

Multiplying the number of photons by the camera’s quantum efficiency (QE) at this wavelength will also indicate the number of electrons that are freed from the sensor’s silicone lattice. In this case, the datasheet indicates that the QE at 540 nm is 69% which means that 60 photons would free 40 electrons to cause an increase of 1 digital number in the readout signal.

For some perspective, on a moonless night, with overcast sky in the countryside with no artificial light, what a human would likely refer to as pitch black, there are roughly 10,000 photons landing on an area of one square centimetre every millisecond. Under the same conditions, if we convert our scale down to square microns, there are roughly 0.1 photons landing on the area every second. So if we were to take the Lumenera Lt545RM without a lens to measure the light, it would require a 54 second exposure to increase the pixel’s value by 1 (if all the photons had a wavelength of 540 nm).

Increasing the light level to a single candle in an otherwise dark room, that same square centimetre at a distance of 1 metre from the candle will have 100,000,000 photons land on it in one millisecond. If we once again scale down our photon landing area to a square micron, we would have 1 photon landing on the area every millisecond. In the case of the Lumenera Lt545RM, you would have roughly 11 photons landing on each pixel every millisecond, assuming the lens is removed. If all the photons had a wavelength of 540 nm, an exposure time of 5.5 ms would be required to increase the pixel’s value by 1.

Measuring sensitivity in terms of photons per digital number may be more intuitive than in digital numbers over nanojoules per square centimeter but it does not tell the entire story. Normalizing for pixel area is essential to compare cameras with differing pixel sizes.

If you have any questions about camera sensitivity or are wondering which one would be best for your particular application, reach out to our imaging experts at info@lumenera.com.