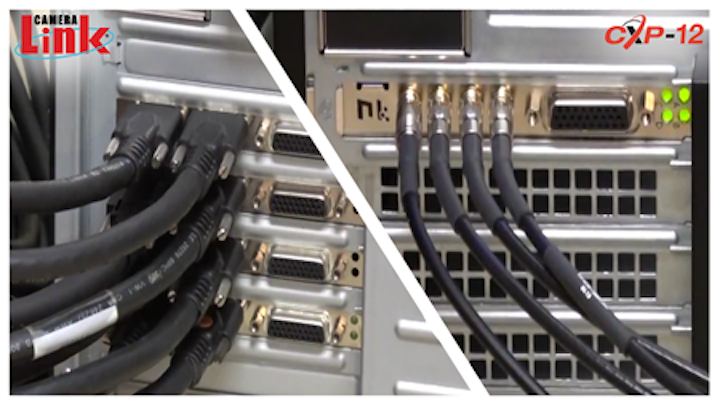 The CoaXPress machine vision standard has established a leadership position in machine vision and video acquisition and monitoring applications by offering high levels of bandwidth, low latency, reliability in tough applications, extended cable lengths and other advantages. The recent release of the CoaXPress Standard Version 2.0 extends these advantages by doubling the maximum available bandwidth to 12.5 Gbps, supporting higher resolution cameras at faster speeds. The new standard also reduces the number of cables and frame grabbers required for a substantial reduction in total system cost. The first frame grabbers and cameras supporting CoaXPress 2.0 standard are reaching the market and they are fueling the emergence of new generations of machine vision inspection, video acquisition, and recording and surveillance applications that deliver higher performance at a lower cost than ever before.

Machine vision and video monitoring applications have advanced at a rapid pace from their early days when they were limited to relatively simple applications such as checking the level of liquid in a bottle or recording customers and employees in a store. Today’s cutting-edge vision systems must meet far more difficult requirements such as distinguishing tiny defects in flat panel displays or solar cells, picking out a lost child in the woods from a camera mounted on a drone, or using hyperspectral imaging to detect materials that are not visible to the native eye. These and thousands of other current and emerging applications demand continual increases in camera speeds and resolutions that are stretching current machine vision interface standards to their limits.

The new CoaXPress 2.0 Version standard addresses this challenge by doubling the bandwidth provided by the previous CoaXPress 1.1.1  standard while maintaining all the other advantages of the previous standard. CoaXPress 2.0 increases the maximum connection bit rate from 6.25 Gbps (CXP-6) to 10 Gbps (CXP-10) and 12.5 Gbps (CXP-12). With four cables and four CXP-12 connections, the maximum data transfer rate is 50 Gbps, or 5 GByte/s. This is sufficient, for example, to operate a 10-bit 12-megapixel area-scan sensor at more than three hundred images per second, or an 8-bit 16k line-scan sensor at 300 thousand lines/s. A single connector CoaXPress CXP-10 camera delivers greater bandwidth over a single cable than a Camera Link Extended Full 80-bit configuration delivers (8.5 Gbps) over two cables. A four-connection CXP-12 frame grabber delivers in a single slot

more bandwidth than four Camera Link Full frame grabbers. CoaXPress 2.0 also increases the up-connection bitrate, from host to device, from 20.83 Mbps to 41.6 Mbps for CXP-10 and CXP-12, enabling a host to send trigger messages to a camera at rates of almost 600 kHz in single trigger message mode or almost 300 kHz in dual trigger message mode. 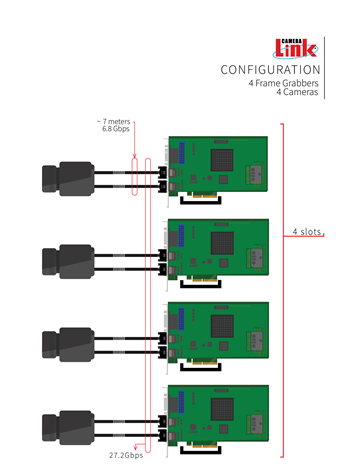 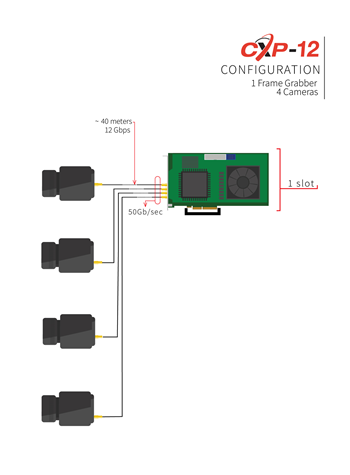 In addition to higher bandwidths, CoaXPress 2.0 also offers significant reductions in overall system cost. One CXP-12 connection can also replace two CXP-6 connections, reducing the number of cables from two to one. CXP-12 also lowers the cost of accessories such as repeaters and split boxes. The higher bandwidth of the new CoaXPress 2.0 standard also does not reduce CXP’s 100-meter maximum cable length which offers a major advantage compared to other standards such as USB3 Vision which limits cable length to 3-5 meters. The new standard offers cable lengths in excess of 100 meters at 3.125 Gbps, 72 meters at 6.25 Gbps and 30 meters at 12.5 Gbps. 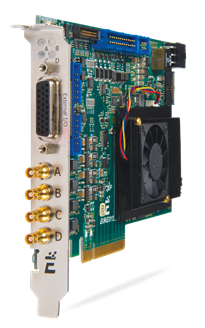 The Coaxlink Quad CXP-12 provides a feature rich set of 20 digital I/O lines with high speed differential inputs, isolated current sense inputs, isolated contact outputs, and high speed TTL inputs and LVTTL outputs to support a wide range of sensors and motion encoders. Hardware triggers come from the Coaxlink I/O lines and software triggers from the application to start the acquisition. When the acquisition starts, at the appropriate timing, the Coaxlink board generates a signal to control an illumination device connected to one of its output lines. Coaxlink supports continuous web scanning to inspect infinite, continuously moving surfaces without losing a single line and discrete object scanning to acquire the image of objects moving in front of the camera. The Memento event logging tool provides the developer with a precise timeline of time-stamped events related to the camera, frame grabber and driver, providing valuable assistance during application development and operations.

Since it was approved as an official standard in 2011, CoaXPress vision interface standard has achieved significant adoption in the machine vision and video monitoring industries by machine builders and system integrators worldwide. CoaXPress 2.0, the latest evolution of the standard, provides a major step forward by delivering the bandwidth to support the next generation of high resolution, high frame rate cameras in delivering a new generation of applications that provide clearer images in less time, making it possible to achieve higher levels of productivity, quality, security and understanding of the real world than ever before.