In many automated systems, robots are required to accurately pick and place products, alleviating the manual labor once associated with the tasks. 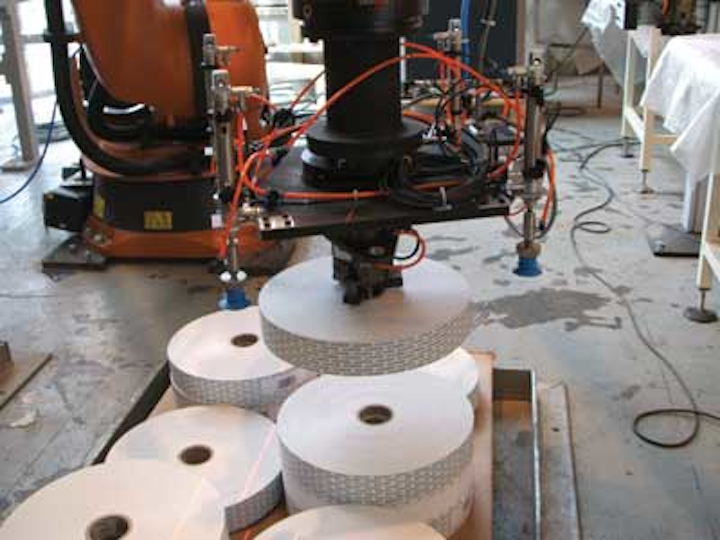 In many automated systems, robots are required to accurately pick and place products, alleviating the manual labor once associated with the tasks. In the automotive industry, for example, sophisticated structured light-based systems may be used to pick randomly oriented objects from bins.

In other applications, however, objects may not be randomly oriented, making the task of the machine vision design somewhat easier. Such was the case at a large UK-based manufacturer of paper products that required a system to pick and place bobbins (reels) of finished paper products onto a fully automated conveyor-based system. To accomplish this, Fountain Design (Shildon, County Durham, England; www.fountaindesign.co.uk) was tasked with building a vision-guided robotic system to perform the task.

"After the finished paper products are manufactured," says Mike Galbraith, Managing Director of Fountain Design, "they are placed in an ordered fashion onto a palette. However, depending on the different types of batches produced, different numbers of bobbins may be stacked on each palette."

In some cases, for example, rows of six bobbins may be stacked on each palette; in others, this number may be higher. Because of this, it was necessary to develop a system that automatically determined both the height of the bobbins on each palette and their correct Cartesian co-ordinates.

To compute the height of each stack, two ZM18B-F laser line-scan cameras from Z-Laser Optoelektronik (Freiburg, Germany; www.z-laser.com ) were each mounted horizontally at an equal 800mm distance from the center field of view of a 544M smart sensor from DVT - now part of Cognex (Natick, MA; www.cognex.com). By mounting these cameras at an angle, each of the laser lines will converge at a point directly under the field of view of the camera.

"At this point, the distance between the camera and the laser line can be accurately measured," says Galbraith. "Thus, any difference in height produced by an object in the field of view results in the distance between the two laser lines being proportional to the height of the object." Thus by extracting laser line image data from the captured images, the height can of each bobbin can be computed. To accomplish this across the entire field of view, the camera is equipped with a 12mm wide angle lens. While the laser lines are used to compute the height of the bobbin, captured image data is used to compute the x, y co-ordinates of the bobbin.

After Cartesian and height data are computed, the data is transferred to the interface controller of a robot from Kuka Robotics (Shelby Township, MI; www.kuka-robotics.com). The robot then picks the bobbin from the palette and places it on the conveyor of an automated system that weighs each bobbin, measures the inside and outside diameters and reads the bar code imprinted on each. After these checks have been performed, known good bobbins are picked from the conveyor by another Kuka robot and placed on a palette for wrapping.

"Originally," says Galbraith, "the DVT camera was chosen as it directly interfaces to the Kuka interface controller. However, Fountain Design's next incarnation of the system will use a GigE-based Genie camera from Teledyne DALSA (Waterloo, Ontario, Canada; www.teledynedalsa.com) and port its existing software to Teledyne DALSA's Sherlock machine vision package to determine bobbin coordinates."