In collaboration with Vision Systems Design and Inspect magazines, FRAMOS has conducted a market survey of trends, interfaces and future developments in industrial camera technology. 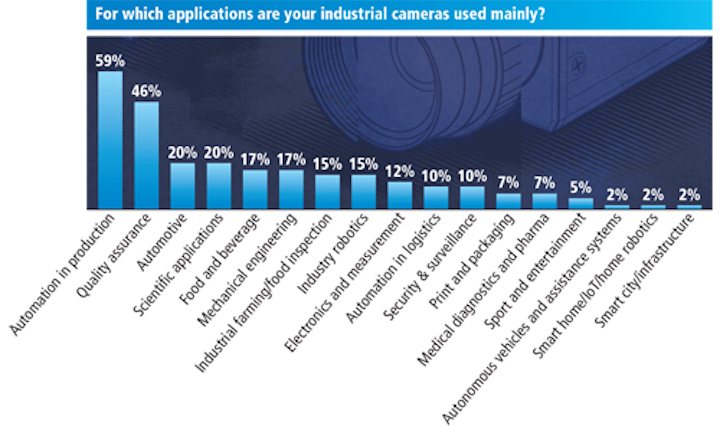 In collaboration with Vision Systems Design and Inspect magazines, FRAMOS (Taufkirchen, Germany; www.framos.com) has conducted a market survey of trends, interfaces and future developments in camera technology. The study is based on the opinions of 41 users and 20 manufacturers from 22 different countries, 66% who were from Europe, 21% from North America, and 14% from Asia.

Respondents answered questions on application and integration, cameras, sensors, sensor modules, and market development. Ninety-four percent of users purchased equipment for the European market in 2018, while the most important markets for manufacturers in the survey were Europe (50% of all cameras sold), Asia (32%), and America (18%). The demand for North America gave up seven percentage points to Asia compared to the previous year, as that area’s continuing investment in automation and robotics presses on.

Emerging tech and a growing market

While imaging technology has mainly been associated with production automation and quality assurance (Figure 1), new areas such as autonomous cars, drones, smart home applications and the smart city, achieved rates of implementation between 5% and 15%. The highest rate of growth was recorded in the robotics sector. 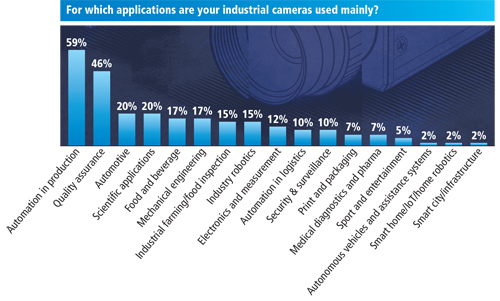 Figure 1: Production automation and quality assurance were the two most popular applications in which users were deploying industrial cameras, while areas such as traffic measurement and monitoring, drones and UAVs and geo mapping received 0%.

As new applications for vision technology in industrial and consumer sectors open, it is expected that the imaging market will continue to grow. This is reflected in the survey, as 75% of manufacturers expect significant growth in the number of first-time users, compared to just 38% in 2017. In terms of how respondents are utilizing vision technologies, this survey indicated that 70% of people want to augment their existing systems with vision technology, 93% are planning to introduce new systems, and 56% want to modernize existing ones.

Looking toward growth areas, 65% of manufacturers see embedded vision as one of the biggest opportunities to integrate image processing technology into all facets of life and work.

While 2017 saw a stabilization in the cost of mid- and high-priced cameras, responses from manufacturers and users suggest that prices are falling again. Sixty-two percent of users say they would be prepared to spend $350 or less on a camera, compared to 19% the previous year. (Figure 2). Thirty-one percent of respondents would pay between $350 and $1000 for a camera, a fall of seven percentage points from 2017, while 8% of users would invest over $1000 in their camera, a fall of 34 percentage points. 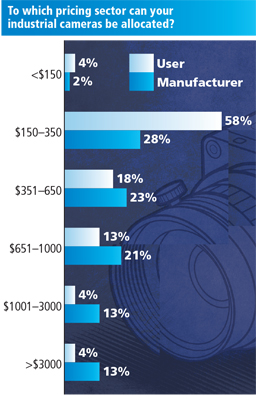 The price segment below $150 increased by just three percentage points, while the losses in the over-$1000 segment are largely due to the benefit of the mid-price segment, which increased from 33% to 44%. This shift can likely be explained through a combination of the altered participant sampling, and the increased competition from Asian manufacturers.

A clear and stable sensor market

The sensor market is clear and remains stable. Sony (Tokyo, Japan; www.sony.com) remains the market leader among the surveyed users at 48%. ON Semiconductor follows with a market share of 22%. At 19%, ams Sensors Belgium (CMOSIS; Antwerp, Belgium; www.cmosis.com) will play a significant role in the clearly divided sensor market over the medium term.

The picture is similarly evident among manufacturers. After a few challenging years for Sony, the Japanese giant has secured market leadership with a share of 62%, a doubling of the previous year’s market share. ON Semiconductor (Phoenix, AZ, USA; www.onsemi.com) has a market share of 22%, a fall of three percentage points. Teledyne e2V (Chelmsford, UK; www.e2v.com) achieves 7%, while ams Sensors Belgium remains at 3% as in 2017.

Perhaps to no surprises at this point, CMOS image sensors are the most commonly-deployed sensors, as 80% of all sensors being used by respondents were CMOS technology.

However, there is a clear difference between traditional machine vision and advanced embedded vision in the industrial and consumer sectors. Embedded vision applications such as autonomous vehicles, drones, and robotics—as well as 3D applications—require sensors that match the needs of their applications.

This year, 68% of all users indicated that they use sensors with resolutions from one to three megapixels. This number is highly indicative of the entire segment below one megapixel moving upward, with only 4% still using the lowest resolution. However, the increase further upward has been much more modest. Forecasts for sensors between three and five megapixels showed that 24% of users favor these models; a rise of six percentage points. Manufacturers take a longer-term view, although the discrepancy is becoming clearer. Sixteen percent of users still use VGA (640 x 480) resolutions, with 62% of all sensors fitted having between one and five megapixels.

In contrast, already 21% of image sensors have resolutions of between five and twenty megapixels. This statistic is consistent with the forecasts of last year. Respondents predict that the next two years will see only a slight rise in resolution. Despite this prediction, resolutions starting from five megapixels will continue to be used for almost a third of all applications.

Seventy-five percent of all users use an image sensor format between 1/3 and 2/3 of an inch, unchanged from last year. Manufacturers show stability and a trend towards miniaturization. Depending on the area of application, generally they choose either very large sensors measuring over one inch, which achieve a share of 33%, or small image sensors measuring up to 1/2 an inch, which have risen to 41% because of embedded vision. Both users and manufacturers use global shutter scanning image sensors.

GigE Vision is by far the leading transmission standard among both manufacturers and users (42% and 43%, respectively). (Figure 3). Analog connections are still used by some users. LVDS and HDMI are additionally used transmission standards, while the use of USB is still evident with a rate of 8%. Both users and manufacturers mainly select the 10GigE and USB 3.1 standards for bandwidths above 5 Gb/s. 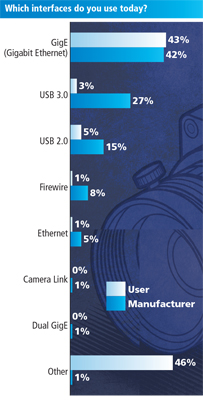 Figure 3: While GigE Vision was the most popular choice among both manufacturers and users (42% and 43%, respectively), a number of respondents indicated that they are still using interfaces such as LVDS, HDMI, and analog connections. (“Other” category)

Embedded vision applications require high-performance sensor modules. The 2018 survey asked users and manufacturers about their plans and criteria for the use of sensor modules.