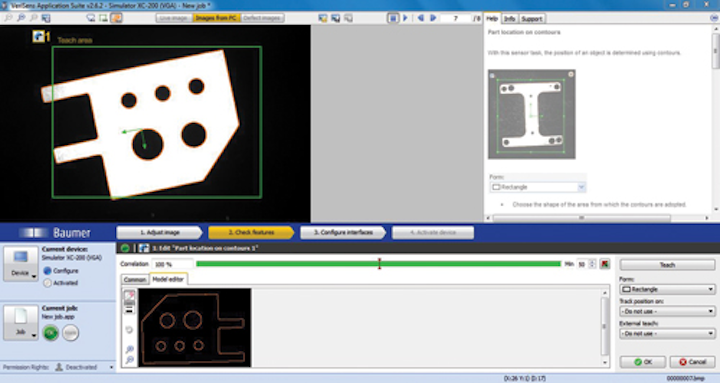 In such products, images are not transferred to a PC but analyzed using the embedded processor in the camera. Thus, they can save systems developers time and money since no frame grabber or host PC will be required in the final imaging station and only the results of image analysis will be transferred to a host PLCor PC.

Furthermore, employing such vision sensors and smart cameras can save systems developers time and money since they can be easily configured using off-the-shelf software. Better still, because of their I/O capability, it may be easy to reconfigure some of these products with additional I/O and display capability.

Although they are now offered by a variety of different vendors, not all such imaging devices are created equal. Indeed, such cameras can be generally classed into five categories. First, there are what is generally termed smart sensors, which are typically those that are offered by companies that only allow their proprietary software to be used with the devices. With vision sensors, systems developers can configure a machine vision application, often from a graphical user-interface (GUI)-based menu supplied by the vision sensorvendor.

While at first this might seem limiting, it does allow such camera vendors to maintain a greater control of their hardware/software offerings, making customer support easier. Better still, many smart vision sensor functions such as focusing may be performed automatically with other functions such as gain and exposure-time illumination adjusted automatically with one-touch controls.

Finally, companies that supply these vision sensors have tailored their software to be configured with a selection of most commonly used machine vision tools to perform such tasks as presence/absence detection, color analysis, parts measurement and optical character reading and verification (OCR/OCV). 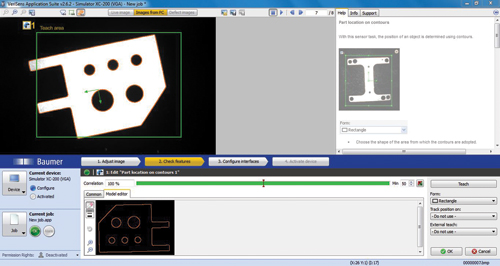 Figure 1:Companies that supply vision sensors offer GUI-based software so they can be set up without requiring any programming by the developer. These include the VeriSens Application Suite from Baumer.

With the understanding that such products may be deployed by those somewhat unfamiliar with vision, manufacturers such as Omron have produced intuitive guides, user manuals and application notes with which to support developers. For its FQ-M Series vision sensor, for example, the company has an online description of the fundamentals of vision sensors (http://bit.ly/VSD-OMR) and an application note showing how to interface the sensor to a robotic system (http://bit.ly/VSD-FQM).

Today, the difference between smart sensors and what constitutes a smart camera is somewhat undefined since the functionality of a high-end vision sensor may appear similar in terms of processing power, triggering, I/O and networking capability. Generally, however, manufacturers of smart cameras offer products with higher performance processors and both area and line-scan imagers making such smart cameras useful in both part inspection and web inspection applications.

Like smart sensor vendors, many smart camera companies offer closed systems that can only be used with their machine vision software. Like vision sensor companies, this eases technical support since only a single software package needs to be supported.

Needless to say, to enhance their range of products, all the companies that offer vision sensors also offer smart vision cameras. Datalogic’s P1-x Series, A Series and T Series of smart cameras, for example are supplied with the company’s IMPACT machine vision software. In some cases, however, a company may wish to employ its own proprietary code within such software packages.

In such cases, third-party or open-source code especially tailored for the application needs to be added. Because of this, a number of smart camera companies provide their own software and allow third-party or open-source machine vision software to run on their products. Such smart cameras have evolved from companies that traditionally offered both frame grabbers, embedded machine vision systems and machine vision software. By using cameras that offer this extra flexibility, systems developers can leverage the power of off-the-shelf often GUI-driven software and, if necessary, add their own or code from an open source or third-party vendors.

While supporting this software then remains the responsibility of the systems integrator, such approaches do allow proprietary products to be developed around standard off-the-shelf image processing packages. Matrox Imaging (Dorval, QC, Canada;www.matrox.com) and National Instruments (Austin, TX, USA; www.ni.com), Omron Microscan Systems (Renton, WA, USA; www.microscan.com) and Teledyne DALSA (Waterloo, ON, Canada; www.teledynedalsa.com) and Vision Components (Ettlingen, Germany; www.vision-components.com) all offer products that can be used with their machine vision software and, in some cases, can be enhanced with proprietary algorithms.

Similarly, the ISC Series of smart cameras from National Instruments are supplied with the company’s Vision Builder for Automated Inspection (AI) software and the cameras can be programmed with NI’s LabVIEW Real-Time Module and Vision Development Module. Teledyne DALSA’s latest smart camera, the BOA series, are offered with both the company’s Sherlock and iNspect Express vision software that allows custom in-line and background scripting.

Recognizing that smart cameras can alleviate many machine vision systems integration tasks, some companies leverage the power of third-party software packages and open-source code from a range of established machine vision software vendors.

Likewise, SynView software running on the CORESIGHT smart camera from New Electronic Technology (NET, Finning, Germany;www.net-gmbh.com) allows software packages such as Adaptive Vision Studio from Adaptive Vision (Gliwice, Poland; www.adaptive-vision.com), HALCON or NI’s LabView, and open-source packages such as OpenCV to be deployed.
Alternatively, developers can choose cameras such as the NEON-1021 from ADLINK Technology (New Taipei City, Taiwan; www.adlinktech.com) that support a number of software packages including Common Vision Blox from Stemmer Imaging (Puchheim Germany; www.stemmer-imaging.com), VisionPro from Cognex, MIL from Matrox Imaging, Sherlock from Teledyne DALSA as well as open-source packages such as OpenCV (https://opencv.org). The NEON-1021-M features MERLIC from MVTec which allows integrators to create dedicated machine vision applications with no programming required via a user-oriented, image-centered user interface designed to simplify development of alignment, inspection, measurement and recognition applications.

Needless to say, any problems encountered in configuring such products with third-party software to perform specific image processing or machine vision tasks will be relegated more to the systems developer than the camera or software supplier.

As well as offering products that support area and line-scan sensor configurations, a new class of smart camera has emerged to allow three-dimensional measurements to be taken. In the past, the computationally-intensive requirements to perform this task were often relegated to stereoscopic vision, light pattern projection or time of flight (TOF) cameras that transferred image data to a PC to generate 3D point clouds and allow measurements to be made onthe data. 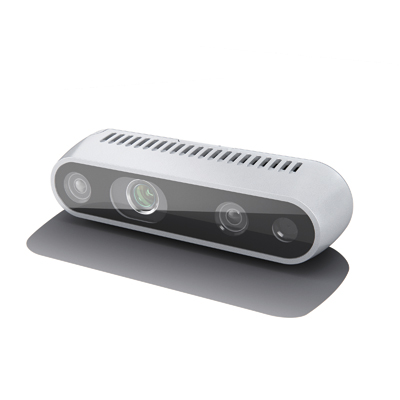 Now, such tasks can be performed in smart 3D cameras that, like their 2D counterparts, alleviate the need for host PC-based systems to be employed. As an example of a smart stereo camera, the RealSense D435 from Intel (Santa Clara, CA, USA;www.intel.com) uses active infrared (IR) to capture images across an 85.2° (H) x 58° (V) field of view (FOV) at distances of up to 10m. At the heart of the camera is Intel’s own RealSense vision processor D4, which is used to process raw image data from the cameras and compute 3D depth maps without the need for dedicated GPU or host processor. This data can then be transferred to a PC using the camera’s USB3 interface (Figure 2). Rather than use a stereo technique to generate 3D depth maps, the PhoXi family of 3D cameras from Photoneo (Bratislava, Slovakia; www.photoneo.com) uses laser pattern projection. In this method, a fringe pattern is created with several wave patterns of shifting phase relationship (see “Active pattern projection improves AOI 3D measurement accuracy,”Vision Systems Design, February 2018; http://bit.ly/VSD-3DPS). In the design of its PhoXi family, Photoneo employs a Jetson processor from NVIDIA (Santa Clara, CA, USA; www.nvidia.com) to perform 3D imaging and transfers the resulting data over a GigE interface to a host computer (Figure 3). The camera has been used by ROMI Industrial Systems (Trnava, Slovakia; www.romi-is.com) in a bin picking application that uses Photoneo’s localization software development kit (SDK) to find part positions and Photoneo’s path planner to guide a UR5 robot from Universal Robots (Odense, Denmark; www.universal-robots.com) to pick and place injection molded parts. A video of the system in operation can be found at: http://bit.ly/VSD-BNP. 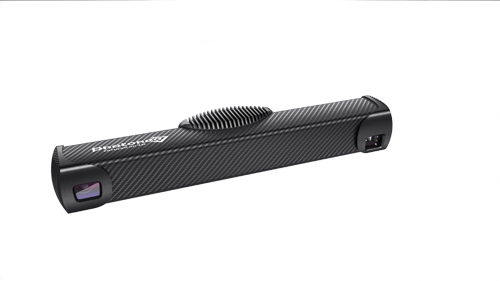 Figure 3:ROMI Industrial Systems has used a 3D camera from Photoneo in a bin picking application to guide a UR5 robot from Universal Robots to pick and place injection molded parts.

Smart 3D cameras that use the time-of-flight principle are also available from such companies as Advanced Scientific Concepts (Santa Barbara, CA; USA;www.advancedscientificconcepts.com). In the company’s TigerCub 3D, a 128 x 128-pixel focal plane array is used to capture light as it is pulsed and reflected from an object. Because the light source and image acquisition are synchronized, distances can then be extracted from the returned data.

Here again, an on-board processor is used to perform image processing, allowing the camera to output 3D point cloud and intensity information over an Ethernet interface. Whether based around single area or line-scan sensors or employing 3D-based stereo, light pattern projection or TOF imaging techniques, the introduction of such smart cameras with embedded image processing software is saving systems developers time and money in configuring machine vision systems.

In the future, the rapid integration of even greater image capture, processing and display functionality by semiconductor vendors will result in even less expensive smart cameras appearing on the commercial market, resulting in an increasingly large number being deployed in machine vision and embedded vision applications.