Global robot sales are expected to see a 6% increase on average per year based on the further penetration of industrial segments like electronics and food and beverage, the continuing industrialization of emerging countries, and the advancement of robot technology. 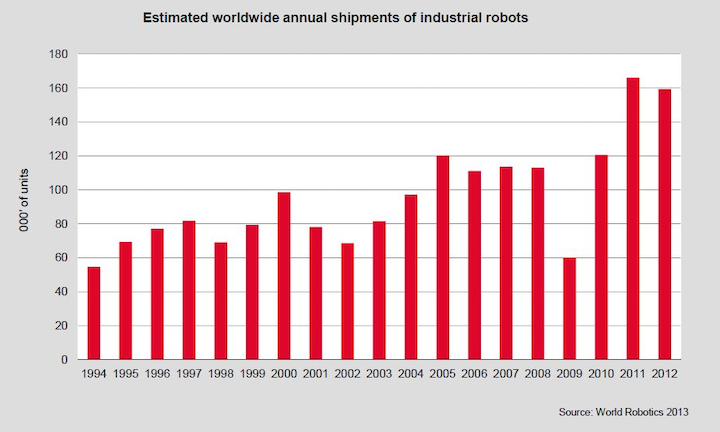 In 2013, global robot sales will increase by about 2%, but from 2014 to 2016, the industry will see worldwide sales increase by about 6% on average per year, according to a newly released report from the International Federation of Robotics.

After three years of increasing robot installations, 2013 will see its share of ups and downs when it comes to sales. Increased spending for robot installations will be seen in the electronics, pharmaceutical, food and beverage, and metal and machinery industries. In addition, the following regions are expected to see growth in robot sales: North America, Brazil, the Republic of Korea, China, Turkey, most Southeast Asian markets, and most Central and Eastern European markets.

On the other hand, the following countries are expected to see robot sales decrease:

Italy, France, and Spain are also expected to see their sales decrease or stagnate as a result of their respective economic situations.

Beyond 2013 the outlook for global robot sales improves, as the report estimates a 6% increase on average per year based on the further penetration of industrial segments like electronics and food and beverage, as well as the continuing industrialization of emerging countries.

In addition, technological advancements should provide a boost in sales.

"These technologies are opening doors to completely new applications for robots,” said Dr. Andreas Bauer, Chairman of the IFR Industrial Robot Suppliers Group in the press release. “Impressive for me are the developments regarding human-robot cooperation and opportunities that are provided in new fields for automation, especially in areas where no robots are currently used."