A recent report from the VDMA indicates that the 1.5 billion Euro (5%) growth prediction for the German machine vision industry was reached as a result of increasing demands and global exports Looking forward to 2014, the VDMA is once again predicting 5% growth in 2014 at a total turnover of 1.4 billion Euros with major growth coming from exports to North America and Asia. 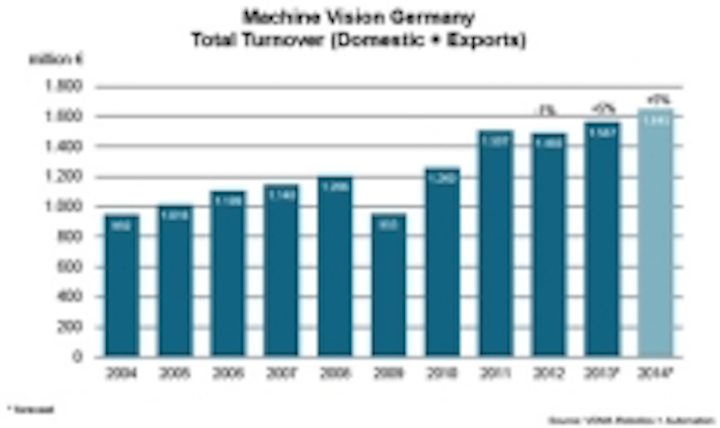 A recent report from the VDMA indicates that the 5% (1.5 billion Euro) growth prediction for the German machine vision industry was reached as a result of increasing demands and global exports. Looking forward to 2014, the VDMA is once again predicting 5% growth in 2014 at a total turnover of 1.64 billion Euros with major growth coming from exports to North America and Asia. With this in mind, let’s take a look at how some companies were able to grow in 2013, and how they and others might be able to grow this year.

Global expansion and export ratios are trends that have popped up among German companies reporting growth in 2013. IDS Imaging Development Systems recently issued a press release indicating that their total sales in 2013 were up more than 20% above the previous year. In the report, which also has IDS growing at 12% for 2014, it is stated that this significant jump in sales can be attributed to international business. The company’s export ratio rose to 40% in 2013, up from 32% the previous year and sales to China more than doubled.

Sales to China are once again expected to be the growth market for IDS, but forecasts for the US and European markets are also strong and expected to help. IDS Imaging Development Systems expects to achieve growth in these markets through enhanced customer support and additional investments in expanding its sales structure. It also plans to augment its expansion plans by launching new products and expanding its facility in Obersulm.

Another German machine vision company with global reach that reported growth in 2013 was Basler, who reached record levels for the year. Machine vision sales increased in fiscal year 2013 by 16% to 65.1 million Euros, up from 55.9 million the previous year. Basler expects that in 2014, sales will increase to somewhere between 70 million and 74 million Euros due to attractive growth opportunities in the industrial camera market. In addition to its headquarters in Ahrensburg, Germany, Basler has worldwide locations in the United States, Singapore, Korea, Taiwan, and two in China.

Demand from North America has also led to machine vision distributor and supplier FRAMOS expanding its operations, with the opening of FRAMOS Technologies Inc. in Ottawa, Canada having recently been announced. Headquartered in Munich, Germany, FRAMOS now has six additional subsidiaries worldwide with offices in England, Italy, France, Russia, Taiwan, and now, Canada.

See other articles from our June 9 e-newsletter.