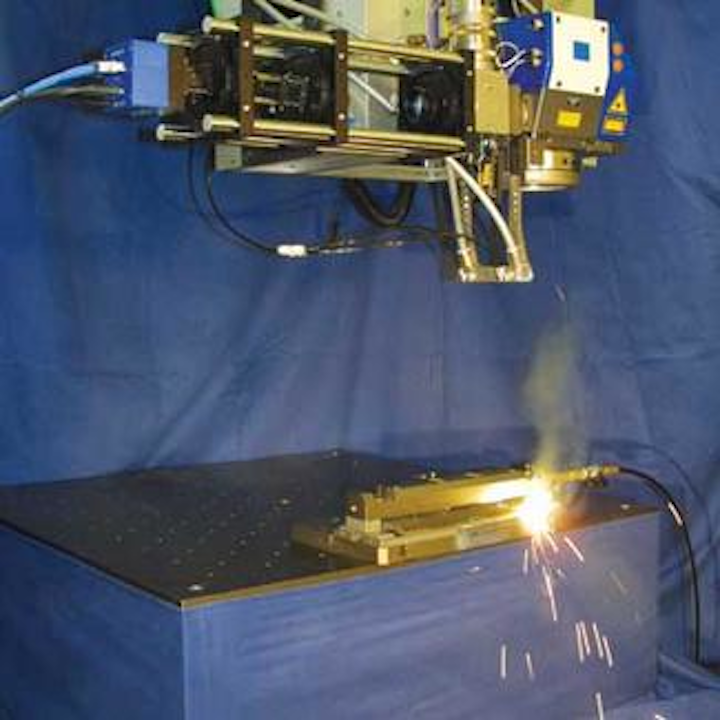 Now widely adopted by major automotive manufacturers, keyhole welding is a process that uses a highly focused laser beam to join materials. In operation, a laser beam moving along a seam produces a keyhole between the materials being welded, which is caused by quickly evaporating metal.

As the keyhole moves with the laser beam along the seam, molten material flows around the keyhole from front to back, effectively sealing the seam. If the correct welding beam power is used, all the plates to be welded will result in a keyhole that is visible as a dark zone behind the laser. Because this dark zone or full penetration hole indicates that the welding connection expands over the whole cross-section of the material, it represents an important quality feature for the strength of the welding seam.

To measure this directly, Leonardo Nicolosi and his colleagues at the Fraunhofer Institute for Physical Measurement Techniques (IPM; Freiburg, Germany; www.ipm.fraunhofer.de) have developed a machine-vision system to detect and measure the penetration hole and provide feedback based on the results (see figure).

“Because of the fast fluctuation of the full penetration hole,” says Nicolosi, “conventional image-processing techniques cannot be used to control high-speed laser welding processes.” In conventional laser welding systems, laser power or metal sheet feed rates are regulated until full penetration is achieved. This results in significant contamination of the weld with smoke residue and spattered molten material. Significant craters can also appear at the end of the weld seam because of the deceleration of the welding process at the end of the weld.

Carefully monitoring the penetration of the weld, however, results in almost an absence of smoke residue and less spattered molten material. To perform this type of monitoring, Nicolosi and his colleagues used an Eye-RIS vision system from Anafocus (Seville, Spain; www.anafocus.com), which both captures images of the keyhole as it is formed and performs preprocessing to monitor keyhole generation as it is forming.

The Eye-RIS vision sensor was coupled to a PFO-33 laser scanner from Trumpf (Ditzingen, Germany; www.trumpf-laser.com) equipped with a 450-mm focusing optic, resulting in a focal diameter of 600 μm. To generate the laser beam, a 6-kW, 1030-nm TruDisk 6002 laser, also from Trumpf, was coupled to the scanner through a beamsplitter. This also allowed images of the welding process to be captured by the Eye-RIS vision system.

“Examining the keyhole as it is forming allows the laser power to be dynamically changed as the weld is formed,” says Nicolosi. “Weld contamination and end-of-weld crates can be effectively reduced.” To accomplish this, captured 176 × 144-pixel images from the vision system are first thresholded, resulting in a binary image. After binarization, the image is dilated along one diagonal and the resultant image masked to reduce the amount of noise in the image.

When source images generated with and without full weld penetration are compared, images with full penetration are clearly discernible. By performing the thresholding and a single diagonal dilation within the cellular neural network of the Eye-RIS image sensor, the processing time for each image was approximately 42 ms.

Using this data, Nicolosi and his colleagues have demonstrated a real-time closed-loop system that allows the laser power to be dynamically adjusted at rates as fast as 13 kHz. “This,” says Nicolosi, “is fast enough for a robust detection of the fluctuating full penetration hole. Therefore, the full penetration state is maintained for a large range of process conditions such as variable speed, material thickness, or pollution.”