Manufacturing a thin-film solar module is a process that requires several production phases, all of which require different kinds of inspection. 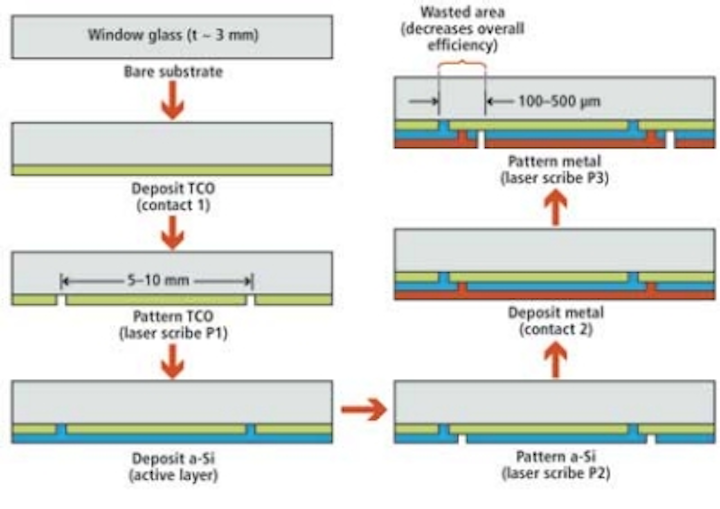 Manufacturing a thin-film solar module is a process that requires several production phases, all of which require different kinds of inspection. By analyzing the material at every phase of these production processes, manufacturers can avoid further processing of flawed or damaged material.

At the start of the manufacturing process, glass is cut and cleaned before the first electrical active layer of transparent conductive oxide (TCO) is applied and laser scribed to define, interconnect, and isolate cells. To prevent material waste, glass impurities such as blisters, tin residues on the surface, scratches, and defective areas in the TCO coating or imperfect scribes must be detected before further processing.

On top of the TCO layer, a layer of semiconducting material is applied by plasma-enhanced chemical vapor deposition (PECVD). This is followed by another scribing process that cuts through the silicon later. After the metal back contact is applied, a final scribing is performed to create a series of thin-strip solar cells (see Fig. 1). Finally, a lamination foil is applied to the back glass to seal against corrosion and moisture.

Coating inspection is performed directly after the second scribing before adding the back contact. Any pinholes in the two semiconductor layers will affect the overall efficiency of the finished module depending on the defect count, their size, and their location on the coated substrate. By rejecting a solar panel at such a stage, manufacturers can eliminate waste. Also, by collecting statistical data about pinhole data distribution, contamination due to the PECVD process can be obtained.

Using the pulses from an encoder attached to the conveying system, these linescan cameras are simultaneously triggered and captured image data sent over Camera Link interfaces to LSP boards. “To accommodate the large amount of data generated,” says Hoff, “these boards filter the image data stream in real time using firmware embedded in the FPGA on the LSP. After this filtering, software—also running on the LSP board—segments the data, measures defects, and extracts features that are used to autoclassify the defects.”

To identify the position and combine the defect data from all cameras, Basler’s SENSIC Core software is used; optionally, the defect data together with the defect image data can be stored to a database. After a scan is complete, a pass or fail decision is transmitted over an SECS (SEMI Equipment Communications Standard)/GEM (Generic Equipment Model) interface.

According to Basler, a front glass inspection system placed in a production line before panels are coated shows that around €115,000 can be saved each time a panel rejection prevents a breakage in the PECVD chamber.