By 2020, more than 1.7 million new industrial robots will be installed in factories around the world, which represents double digit annual growth from now until then, according to the International Federation of Robotics (IFR). 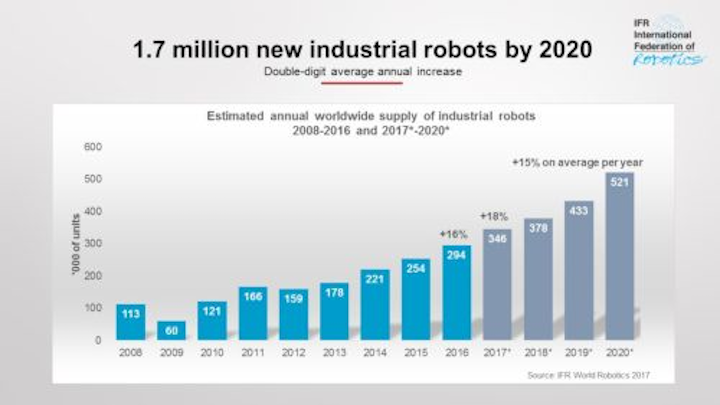 By 2020, more than 1.7 million new industrial robotswill be installed infactoriesaround the world, which represents double digit annual growth from now until then, according to theInternational Federation of Robotics(IFR).

In terms of units, it is estimated that by 2020, the worldwide stock of operational industrial robots will increase from about 1,828,000 units at the end of 2016 to 3,053,000 units. This, according to the IFR, represents an average annual growth rate of 14% between 2018 and 2020. Projections such as these are aided by significant growth that is expected in the top markets in the world over the next year.

In the Asia-Australia region, for example, 2017 robot installations are estimated to increase by 21%, while robot supplies in the Americas will rise by 16%, and by 8% in Europe. Growth like this is being achieved, according to the IFR, because of a response to faster business cycles and the requirement to produce with greater flexibility tailored to customer demand in all manufacturing sectors.

"Robots offer high levels of precision and their connectivity will play a key role in new digital manufacturing environments," said Joe Gemma, President of the International Federation of Robotics. "ncreasing availability enables more and more manufacturers from companies of all sizes to automate."

Accounting for 74% of the total robot sales volume in 2016 are the top five markets in the world: China, South Korea, Japan, the United States and Germany, which saw the following growth in 2016:

Future trends that could drive growth, according to the IFR, include Industry 4.0 and the smart factory and small-to-medium sized manufacturers that will look to automate:

View a presentation on the World Robotics 2017 report.
View a press release.
Purchase the report.