Factory automation robots of various shapes, sizes, and capabilities were among the most prominently featured products at this year’s Automate show in Chicago, which took place from April 3-6. One such company developing these products is Epson Robots, which was showcasing its latest robotic solutions on the show floor. Phil Baratti, Applications Engineering Manager, and Rick Brookshire, Group Product Manager, discussed the Flexion N2, as well as its robots’ use of vision, the latest trends in robotics, the impact of robots on jobs, and more, with me while at the show. 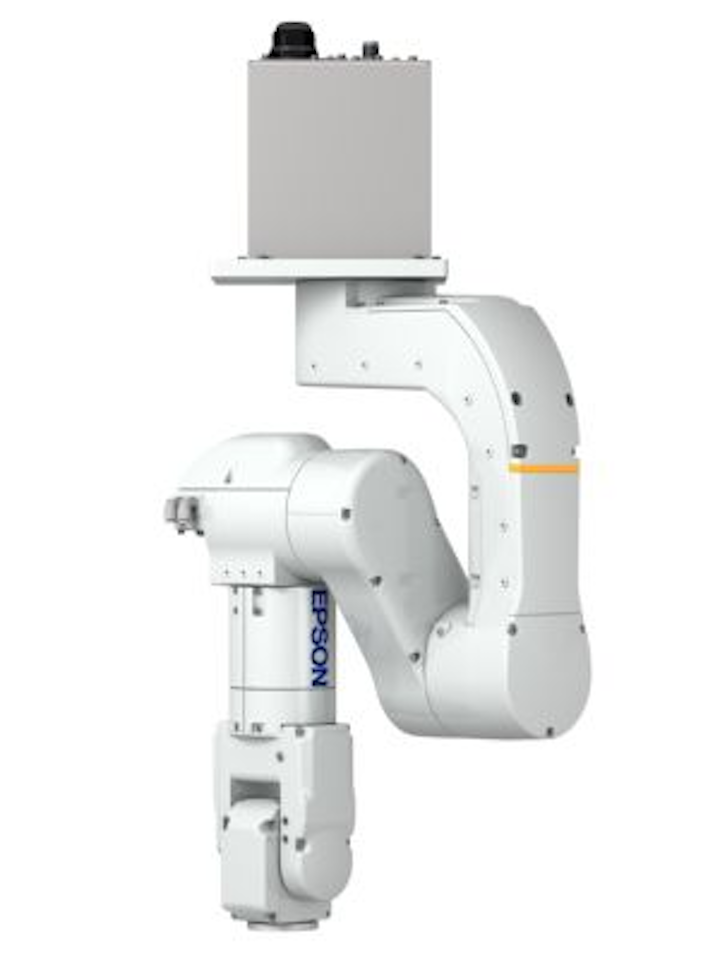 Factory automation robots of various shapes, sizes, and capabilities were among the most prominently featured products at this year’s Automate show in Chicago, which took place from April 3-6. One such company developing these products is Epson Robots, which was showcasing its latest robotic solutions on the show floor. Phil Baratti, Applications Engineering Manager, and Rick Brookshire, Group Product Manager, discussed the Flexion N2, as well as its robots’ use of vision, the latest trends in robotics, the impact of robots on jobs, and more, with me while at the show.

First, we talked about the new, compact Flexion N2 6-axis robot. The N2 features patented folding arm technology, and was designed for applications with compact space, according to Baratti and Brookshire. The arm of this robot, they explained, has the ability to fold up on itself.

"What normally happens with a 6-axis robot is that the elbow gets in the way," said Baratti. "This doesn’t happen with the N2 robot, which is designed for smaller workspaces, and provides more efficiency."

Applications that the Flexion N2 could be deployed in include electronics, pharmaceutical, and any other place with a need for a compact environment, he explained. The Flexion N2 robot design was based on customer requests, especially those in the electronics market, said Brookshire.

"Don’t just make a smaller robot, make something more efficient, and smaller," Brookshire said of the customer requests they received.

"Prior to this, everything offered in the 6-axis market was just an incremental improvement," said Brookshire. "But we see this as a significant change. Something really new."

In terms of the vision system offered or supported by the Flexion N2, vision can be added in. In fact, the Epson Vision Guide is an integrated product offered by the company that provides motion guidance for the robot. The Vision Guide uses CMOS image sensors up to 10 MPixel in size, including some of the latest sensors from Sony. Vision Guide utilizes third-party industrial cameras with a range of options, and features a GigE interface and cable that is routed through the robot arm.

Additionally, Epson has designed the Vision Guide so that it can find multiple parts at once with its vision algorithms. This was implemented in order to augment the company’s increasing focus on flexible feeding applications.

"We are starting to make standard flexible feeding products using our robots and vision, and our guidance has to be on point," said Baratti. "We also offer an exciting product called ‘Force Guidance’ that drives placement precision to levels far better than what can be done with robot guided vision. By integrating our Force Sensor into our low level servo control loop, our robots are able to "feel" their way into areas with tolerances sometimes well below the repeatability of the robot. Through using our integrated Force Guidance solution, we have been able to show placement to better than 10 microns with robots that have 20 micron repeatabilities."

One huge theme of the Automate show in general was the impact, whether positive or negative, that robots will have on jobs. Some say they will create jobs, others say they will take them away, but really it’s a bit of both, according to Brookshire.

"Jobs will be both created and taken away. Fifty years ago, we had secretarial pools for typing. But now there is a whole new industry of people building computers that are used for creating far more than just memos and letters. Robots are taking away the jobs humans don’t like or cannot do. But, they are also creating new jobs for technicians and engineers as well as allowing us to build new products that cannot be built by humans."

Brookshire then provided an example of a robot that is used in cancer treatments, and how this is a positive, whichever way you choose to look at it.

"Drugs expire, and often times, doctors and nurses are handling them, which can be dangerous. Robots can now handle tasks like this, taking people out of harm’s way. Robots can perform functions that people can’t do, including applications that involve safety and precision."