Global sales of industrial robots reached 380,550 units in 2017, which is a 29% increase compared to the previous year (294,300 units), according to the International Federation of Robotics (IFR). 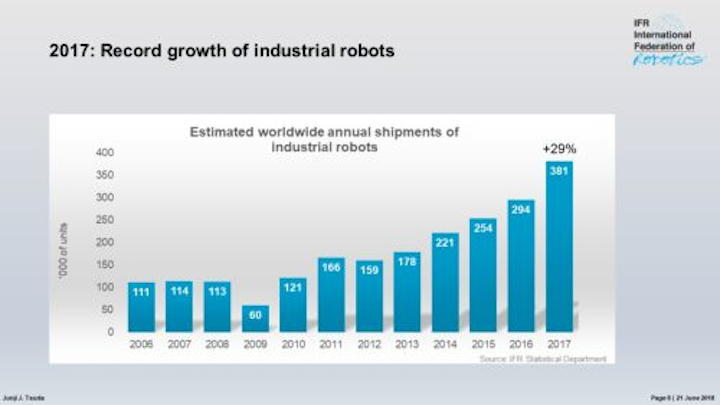 Global sales of industrial robots reached 380,550 units in 2017, which is a 29% increase compared to the previous year (294,300 units), according to the International Federation of Robotics (IFR).

China saw the largest growth in terms of sales volume, having installed around 138,000 industrial robots (up 58%). Asia had significant growth in other markets as well, as South Korea sold around 40,000 units and Japan around 38,000 units. In the Americas, the United States sold approximately 33,000 industrial robots (6% growth), while Germany saw growth of about 8% with around 22,000 units sold, according to the IFR’s World Robotics Report 2018.

Broken down by industry, the automotive industry continues to lead global demand for industrial robots. Last year, around 125,000 units were sold in this segment, representing 21% growth. The strongest growth sectors in 2017 were the metal industry (+54%), the electrical/electronics industry (+27 %), and the food industry (+19%).

"The growth of industrial robots continues at an impressive pace worldwide," says Junji Tsuda, President of the International Federation of Robotics. "Key trends such as digitalization, simplification and human-robot collaboration will certainly shape the future and drive forward rapid development."