Instead of taking jobs away from human workers, industrial robots are actually helping to create new jobs in Germany, according to a new study by the Centre for European Economic Research (ZEW). 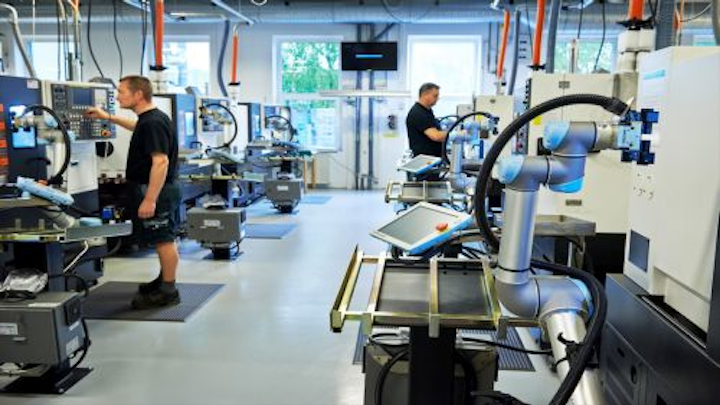 Instead of takingjobsaway from human workers, industrial robots are actually helping to create new jobs in Germany, according to a new study by the Centre for European Economic Research (ZEW).

The study, which was done on behalf of the German Federal Ministry for Education and Research (BMBF), shows a robot density of 309 units per 10,000 employees in the German manufacturing industry, which is the third highest worldwide. At the same time, the number of people employed in Germany has reached 44 million (2017), which is the highest figure since reunification. This, according to the ZEW, suggests that the proliferation of robots hasn’t made a dent in employment figures, and that new tasks (and jobs) have been created after robots are introduced.

In Germany, the rise in the use of machines has allowed employment to grow by 1%, further automation and digitalization in industrial settings will generate a 1.8% in employment by 2012, according to the ZEW.

"The results of the ZEW study on the labor market confirm what we’re observing in leading industrial nations across the world," saidJunji Tsuda, president of the International Federation of Robotics. "The modernization of production shifts hazardous, unhealthy and monotonous work to the machines. In the vast majority of cases, only certain activities of a job are automated and not the entire spectrum of an employee´s work." However, if jobs are cut – the ZEW reports that 5% of employees were replaced within five years – these losses are compensated for by new jobs overall.

An IFR position paper called "The Impact of Robots on Productivity, Employment, and Jobs," states that concern about the future of employment and jobs is causing widespread debate and political shifts, and that robots are often viewed as "job killers." The IFR takes a difference stance on this, however, saying that robots should be viewed in a more positive light, concerning jobs.

"Research indicates that robots complement and augment, rather than substitute for, labor and in doing so, raise the quality of work and the wages of those fulfilling new tasks," wrote the IFR paper’s author.

The paper does, however, bring up the fact that a concern regarding middle-skilled, middle-income jobs and increasing wage inequality is warranted, but can’t be solely attributed to automation.

"Whilst automation appears to be increasing the demand for high-skilled, high-income employees, its impact on low-skilled, low income employment is less clear," wrote the IFR. "Wage stagnation appears to be far more attributable to structural issues such as employment conditions that force down wages and dampen investment by employers in skills training. A reduction in robot usage would neither help low-skilled workers, nor resolve these structural issues."

Augmenting this sentiment is a study published by the London School of Economics (LSE) entitled "Robots at Work," on the use of industrial robots in 17 developed countries between 1993 and 2007. Guy Michaels, head of research for LSE, summarized key results at a press conference at automatica 2018 in Munich, Germany.

"Productivity has improved by around 15% due to industrial robots. At the same time, the proportion of low-skilled labor dropped and pay increased slightly. Industrial robots don’t have any significant impact on the number of employees overall," he said.