With growth in automation adoption worldwide, the average of global robot density has risen to 74 robot units per 10,000 employees as of 2016, according to a new report from the International Federation of Robotics (IFR). 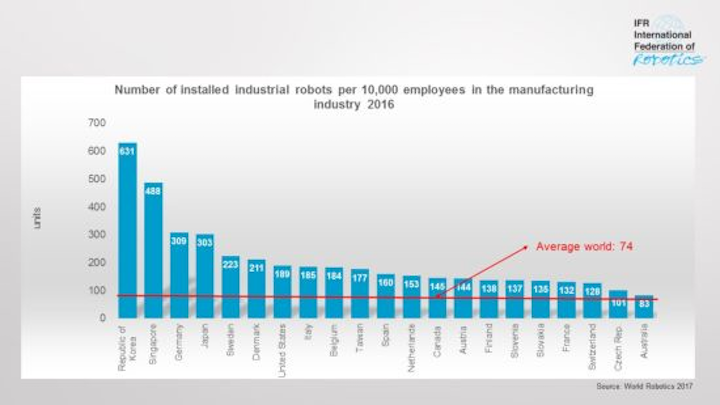 With growth in automation adoption worldwide, the average of global robotdensity has risen to 74 robot units per 10,000 employees as of 2016, according to a new report from the International Federation of Robotics (IFR).

The top 10 most automated countries in the world, according to the 2017 World Robot Statistics from IFR, are South Korea, Singapore, Germany, Japan, Sweden, Denmark, USA, Italy, Belgium and Taiwan.

"Robot density is an excellent standard for comparison in order to take into account the differences in the automation degree of the manufacturing industry in various countries," said Junji Tsuda, President of the IFR. "As a result of the high volume of robot installations in Asia in recent years, the region has the highest growth rate. Between 2010 and 2016, the average annual growth rate of robot density in Asia was 9 percent, in the Americas 7 percent and in Europe 5 percent."

Here are the highlights from throughout the world: