Recognition Robotics’ Robeye All-In-One (RAIO) camera leverages an ADLINK smart camera that runs vision algorithms directly on the camera and is used to provide vision guidance for a robotic arm in an automotive asse mbly process. 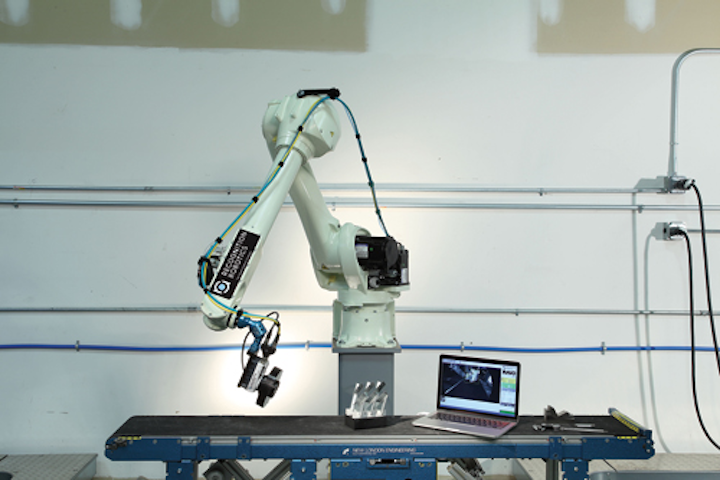 In 2012, Recognition Robotics introduced its Robeye solution for robot guidance that was designed to mimic the way that humans see. The system uses an industrial camera attached to a robot arm to capture images of part that the robot will be guiding to, and a separate industrial computer processes the images and communicates with the robot’s controller.

Recently, an automotive customer required a system with a smaller footprint, lower cost, and a simpler setup and operation. To provide vision guidance for a robotic arm being used to derack automotive body panels and place them onto a vehicle in the body-in-white part of the vehicle assembly process, Recognition Robotics partnered with ADLINK Technology (New Taipei, Taiwan; www.adlinktech.com) to develop an improved version of Robeye called Robeye All-In-One or RAIO. 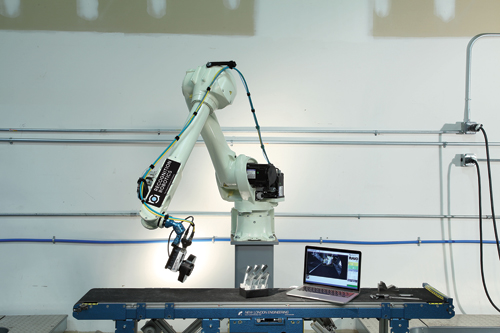 Recognition Robotics recently partnered with ADLINK to develop an improved version of Robeye called Robeye All-In-One (RAIO) for an automotive customer that required a system with a vision-guided robot for automotive body panel deracking that offered a smaller footprint, lower cost, and a simpler setup and operation.

Running on the RAIO camera, Recognition Robotics’ vision algorithms were applied to the robotic vision guidance system. The algorithms, according to Recognition Robotics, process images similar to how the human visual cortex functions. From a single 2D image, the system can recognize a part and return the X, Y, Z, Rx, Ry, and Rz location information about the orientation of the part within the robot’s user frame. With this data, the robot is then able to update a preprogrammed path with the corrected offset data of that part’s current location in space.

“The algorithms are based on the human cognitive ability to recognize objects. When I developed these algorithms, I was mimicking the human visual cortex. We’ve used knowledge about human brain function, the point of view of the human eye, and put this into the software realm,” Dr. Simon Melikian, CEO, Recognition Robotics. Recognition Robotic’s RAIO is a lightweight solution that can be mounted directly onto the robotic arm, and because it is a self-contained system, it is easy to remotely interface the RAIO and the robot controller for object teaching, configuration, and execution, according to ADLINK. This capability allows for remote programming and monitoring of multiple RAIO work cells across the manufacturing floor network.

“ADLINK is very well known in the industry. They have been very flexible with us, they worked with us to get exactly what we needed out of an embedded sensor. There were specific features that we talked to ADLINK about, and they made sure we received exactly what we were looking for,” said Bradley Vargo, Robotics Guidance Engineer, Recognition Robotics. — James Carroll, Senior Web Editor.

IN CASE YOU MISSED IT: In this slideshow on 3D imaging—which is one of the four topics covered in our Next Generation Vision Systems special focus—we look at 10 recent applications of 3D imaging technology, ranging from a system that uses a 3D image processing system for web inspection to a 3D robotic vision system that measures plant characteristics.
James Carroll
Nov 21st, 2017