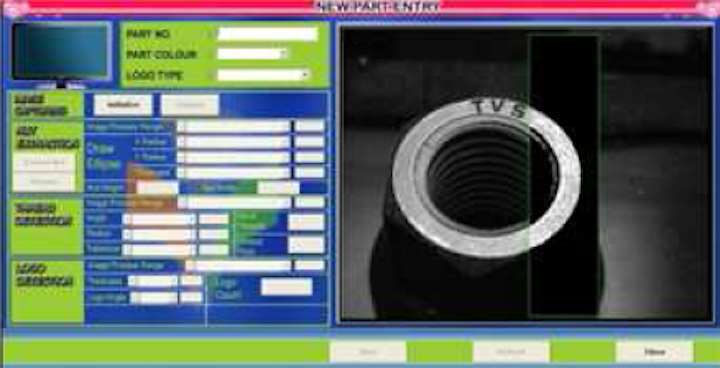 The system captures images of the nuts from a 60 fps 640×480 CCD camera from The Imaging Source (Bremen, Germany) as they move on a conveyor at a speed of sixty nuts per minute. The camera is mounted at an inclined angle so that an image of the top surface of the nut and the threaded portion of the nut can be captured in a single frame.

The images are then processed using image processing algorithms developed using Microsoft's Visual C++. The software first determines the alpha numerical characters on the top surfaces of the nuts. It then finds the threads on the nuts and determines their pitch, which it correlates with the character data. If the two are found to match, the nut is accepted. If not, the part is rejected.

The researchers are currently working to improve the performance of the system by using an artificial neural network technique assist with the nut sorting process.

More information on the system can be found here.

Recent automotive stories from Vision Systems Design that you might also find of interest.

Researchers from the Department of Electrical and Electronic Engineering at the University of Malaysia (Gambang, Pahang, Malaysia) have developed a vision-based intelligent parking space detection system that could help motorists identify the free spaces in car parking lots.

A Drexel University (Philadelphia, PA, USA) mathematics professor has developed a computer program that can create a curved mirrored surface that provides an undistorted wide angle field of view.

Drunk driving may soon become a thing of the past thanks to a face-recognition program developed by a pair of University of Windsor (Windsor, Ontario, Canada) engineering graduate students.

4. Cameras scan the highways for potholes

To rapidly, accurately and cost effectively detect damage to roads, authorities in the Netherlands have adopted a high-speed, 360 degree camera system capable of accurately recording data from up to three lanes simultaneously at speeds up to 130kph (80mph).

A new app uses the camera in an Android smart phone to measure the relative speed and distance between a vehicle and those in front it, broadcasting audio and visual collision warnings whenever the risk of an impending collision is detected.